Last week Congress approved and the president signed into law a $16.3 Billion plan to ease health care delays at Veterans Affairs facilities amidst recent corruption scandals. However, according to Mike Peck, Superintendent of Lake County Veterans Assistance, a social services agency, “The money’s already there; it’s not a money problem, it’s a management problem.” The VA’s current budget is approximately $150 Billion. 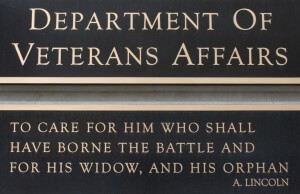 The behemoth VA has spent other large amounts in the past with little result. Four years ago, almost $500 million was spent to merge Dept. of Defense employee records with the VA’s systems; the combination would give VA doctors better access to pharmacy service treatment records. To date, the merging of the two systems is still not completed.

A recent audit of all VA hospitals showed the worst offenders regarding timeliness of scheduled visits were Illiana Health Care System in Danville and the VA Medical Center in Marion. Both hospitals had high average wait times for new patients seeking primary care: Danville at 54 days and Marion at 38 days. Peck says a common-sense solution to avoid delays would be for hospitals to schedule interim appointments while eligibility is being determined.

Lake County Veterans Assistance is located in a small house in downtown Waukegan, and according to Mike Peck is “the best kept secret in Lake County.” The agency is a proverbial workhorse, handling 1,700 cases annually, and meets with over 120 veterans each month. Mike Peck helps veterans deal with the labyrinth of federal regs for completing pension and disability applications, and also provides assistance for wheelchair, housing (subsidized by H.U.D) and employment services. Peck has been able to speed up claims through the new fully developed claims process; the much-publicized backlog of open claims no longer exceeds 120 days on average. 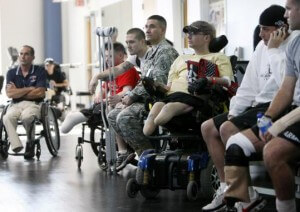 Of the 750,000 veterans in Illinois, 40,000 live in Lake County, and one third or 250,000 live in Cook County. In contrast to Lake County, budget battles with county leadership have prevented the Cook County VA office from staffing to assist with any disability or pension claims.

Most common Vietnam service disabilities are tinnitus (ringing in the ears) and diabetes resulting from exposure to Agent Orange. Veterans of the Iraq and Afghan wars suffer from post-traumatic stress disorder (PTSD). The best way to deal with PTSD, Peck explains, is to provide a place where vets can sit together and talk about their problems, avoiding the need for formal psychiatric help in the future. For the past several years he has been working to create a drop-in center and move his current office to the Lovell Center to give vets and their spouses “one-stop shopping” for all veterans’ services in Lake County.

Looks like a management problem indeed. Where is the accountability?