Three years ago I wrote here taking a close look at a front page Chicago Sun-Times story I thought was dangerously unfair. It used a method all too common in Chicago at least then — taking unproved allegations by criminal prosecutors and inflaming them into salacious stories against which the accused cannot speak in public. That’s a pernicious way to do the news and puts far too much power in prosecutors’ hands as I see things. That’s what the Sun-Times did. 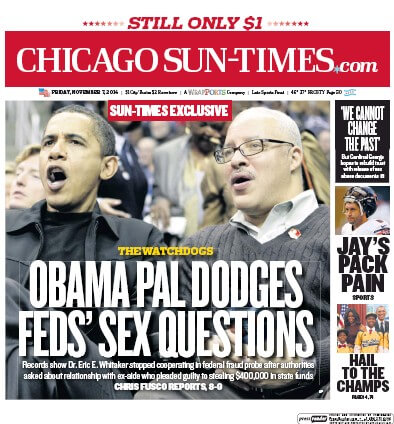 It was about somebody I didn’t know — a state official appointed by Gov. Pat Quinn. I didn’t know whether he was good or bad, guilty or not. I still don’t. That didn’t matter because it was about fairness, process and abuse by prosecutors. If you think you nevertheless need to know the details, my article is linked here. The front page story I wrote about is on the right.

You never know what effect you are having. What I do know is that I was thanked by people very close to the proceeding who said I was the only one who saw what was going on. I also know that that I haven’t seen as much of the same method used in Chicago anymore, which is “trial by extrajudicial torture,” as the Financial Times once described as how prosecutors in America often work.

This week, the Sun-Times‘ new owners promoted Chris Fusco to editor-in-chief. He authored that story I criticized, though I no longer see his name on the link to it.

On other matters he’s done lots of superb work that we’ve linked to here.

I wish he and the Sun-Times the best and I hope they stay mindful of the dangers of press collaboration with criminal prosecutors.

–Mark Glennon is founder of Wirepoints. Opinions expressed are his own.

February 19, 2020
If you’ve listened to Gov. J.B. Pritzker in the past few weeks, you’ve heard him play games with words. We called him out on it recently and now he’s doing it again. If the progressive tax fixes the budget deficit and delivers a tax cut, then there will be no money for property tax relief.
View Comments (11) | Add Comment