Zero Hedge, which has reprinted some of our articles recently, is among news sites used as Russian propaganda tools, according to The Washington Post.  I’m not pretending for a minute that the Russians give a ruble what we say on this site, but there are issues here for all of us who read or write on the internet.

According to the Post, “The flood of ‘fake news’ this election season got support from a sophisticated Russian propaganda campaign that created and spread misleading articles online with the goal of punishing Democrat Hillary Clinton…and undermining faith in American democracy, say independent researchers who tracked the operation.” 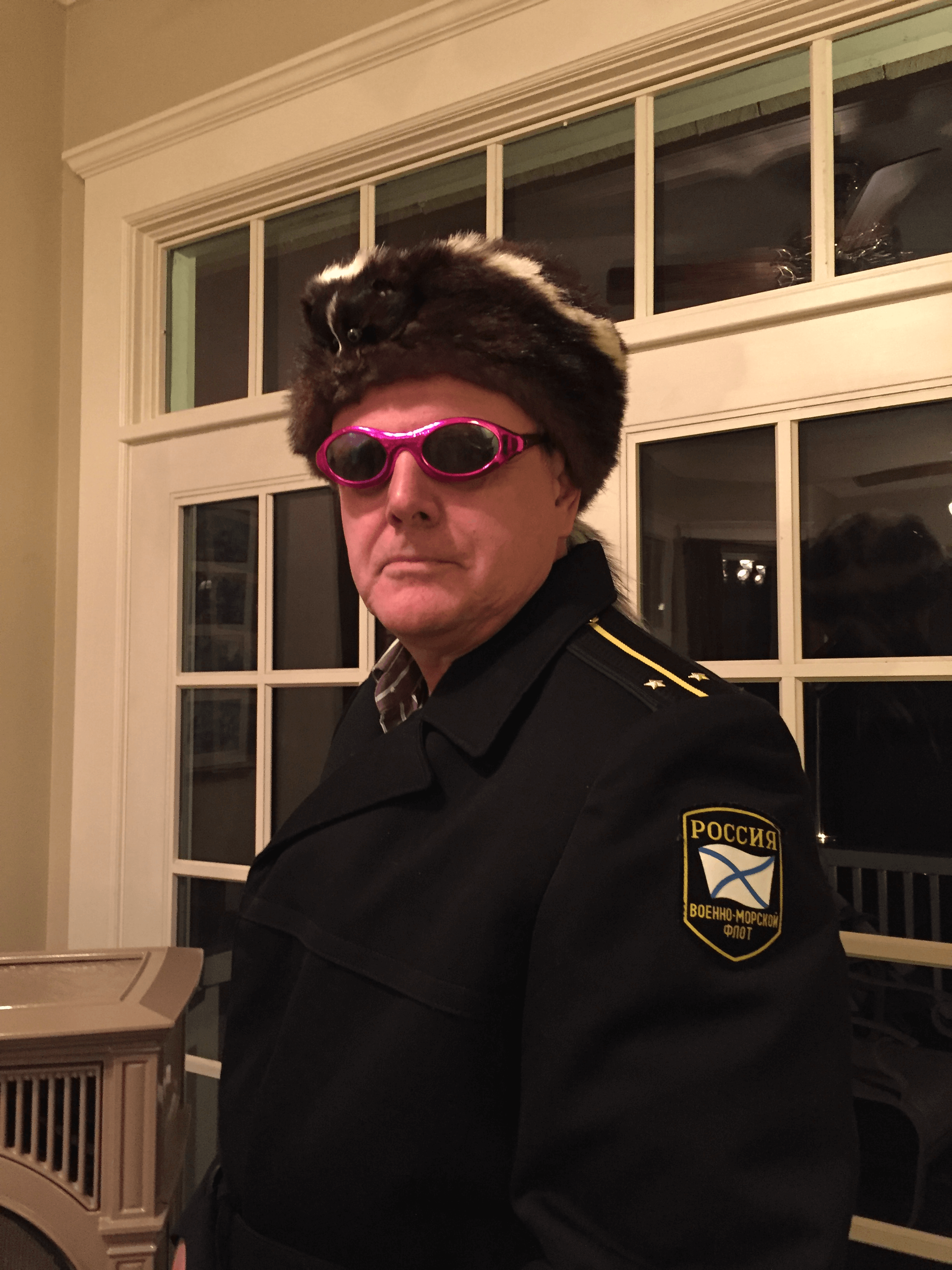 Before addressing the issues, I should mention I got this great Russian admiral’s coat at a surplus store, shown on the left, so here’s what I’m thinking:

First, I’ll need to trade in that skunk hat for a “Make America Great Again” cap.

For underneath, I’ll order up a Zero Hedge thong, shown on the right.

Maybe then I’ll head over to the Starbucks in Evanston to flash at the folks reading Huffington Post and sipping Sugar-Free, Vanilla Latte With Soy Milk.

But never mind that. We need to get to the Post’s battle to save American democracy:

• Silly as the Post article is, don’t dismiss for a minute the claim that Russia propagandizes Americans in at least some of the ways described by the Post — or that America does it to them and that both American political parties use many of the same tricks. It’s just not that hard to engineer messaging and drive traffic using social media. Clinton’s superpac admitted spending $1 million on fake Hillary supporters to troll the internet. Comments by trolls drive traffic and are a key part of what stories show up in Google searches.

• The Post story focused on propagation of stories helpful to Donald Trump. Gimme a break — the issue is much broader than that and the Post is being deceptively selective. RT (formerly, Russia Today), is now Russia’s primary propaganda arm. They overtly and consistently focus on other topics critical of America that would not have worked to Trump’s advantage. Most conspicuous is their message on racial and income inequality, particularly the Black Lives Matter complaints. The Post didn’t discuss Russian efforts on those stories for comparison. (By the way, watch the RT network on cable or check out their website if you never have. They do a more sophisticated job presenting the left’s complaints about America than do Salon, Slate, Politico, The Atlantic, The New Republic, Huffington Post and the rest.)

• The Post headline claimed its story was about the “fake news” problem but, for the most part, it wasn’t. It pinned origination of very few stories on the Russians. That includes the most notorious, recent, fake news stories, which have been traced to other sources. Instead, the Post story is mostly about how the Russians “echoed and amplified” stories they liked using “thousands of botnets, teams of paid human ‘trolls,’ and networks of Web sites and social-media account. Yeah, that’s what Hillary did some of, and much of it is SOP in politics and news today. For a more specific critique of the Post story see Fortune’s, linked here.

• “Fake news” is a serious problem that will be a challenge to control, no matter who originates it. But the scope of that problem to date is dwarfed by the problems that destroyed the regular media’s credibility. Nobody is better at spin, even while retaining accuracy, than regular reporters, and they know it. By selecting which stories and facts to cover, and ignoring others, reporters can paint the world whatever color they want. Some choose that color deliberately and some unwittingly because they are biased. The public has had it with that.

The only solution for all the above is for the public a) to be more skeptical of sources, b) to read multiple sources and c) not to turn back to exclusive reliance on the traditional media that betrayed its trust.

If an article fits part of the Russian propaganda narrative, well, we’ll just have to deal with that. Zero Hedge, like this site, is often about government fiscal problems. Maybe the Russians will use that to support their predictions of the collapse of American capitalism, which they’re still peddling. Maybe another site’s story about police brutality fits Russia’s theme about racial oppression in America. Anything self-critical Americans write can be used as foreign propaganda and misused to try to influence elections. That doesn’t make any of us “tools” of the Russians, as the Post put it.

And most of us happen to have confidence that the marketplace of ideas is the best way to sort this out and the best chance to avoid the impoverished autocracy that is Russia. The internet made that marketplace vastly more vibrant and democratic, warts and all, which won’t help countries like Russia in the long run. If anybody is worried that we are tools for somebody “undermining faith in American democracy,” as the Post put it, well, maybe they should read more closely and look at the whole product.

In the meantime, I’d be happy to see more stories from Russia like that that one in Pravda.ru mocking fiscal problems of Chicago and Kankakee County. We wrote about that story here and it got tons of pageviews. The Pravda story said pretty much the same things about Chicago we often say here. And kudos to them for knowing that Kankakee County indeed has particularly serious problems. Better than anything I’ve seen in the Post on state and local fiscal crises.

UPDATE 11/27/16: Plenty of other stories lambasting the Washington Post on this are now up. Linked here is a particularly thorough one from The Intercept.

obviously the greatest fake news propaganda conspiracy perpetrated on the public by a landslide, is the main stream presses continued reliance on fake accounting of local-state-national debit by the vested.

Kankakee did get rid of some of the old established politicians. Mayor is next that needs to be put to pasture.