On the surface, things look great for state revenue from gaming and betting in Illinois. For the fiscal year that ended in June, the state’s share of tax revenues on it reached $1.4 billion, a 3.5% increase from 2017 levels. Video gambling led the way, increasing by 15% increase to $347 million.

But look closer and you’ll see a lesson about expectations for new gaming revenue for the state.

Aside from video gaming, state revenue from every other form of legal gambling in Illinois — the lottery, horse racing and riverboats —  was flat or down. That’s been pretty much true for years. Total state gaming revenue hasn’t even caught up to its peak in 2006. Except for small and inconsistent gains in lottery income, video gaming has been the only bright spot. Horse racing has been particularly devastated, where state revenue has dropped to just $6 million. The 2015 closings of Maywood Park and Balmoral Park leave only three tracks operating in Illinois.

It’s all detailed in a recent report by COGFA,  Illinois’ Commission on Government Finance and Accountability. Here’s the key chart: 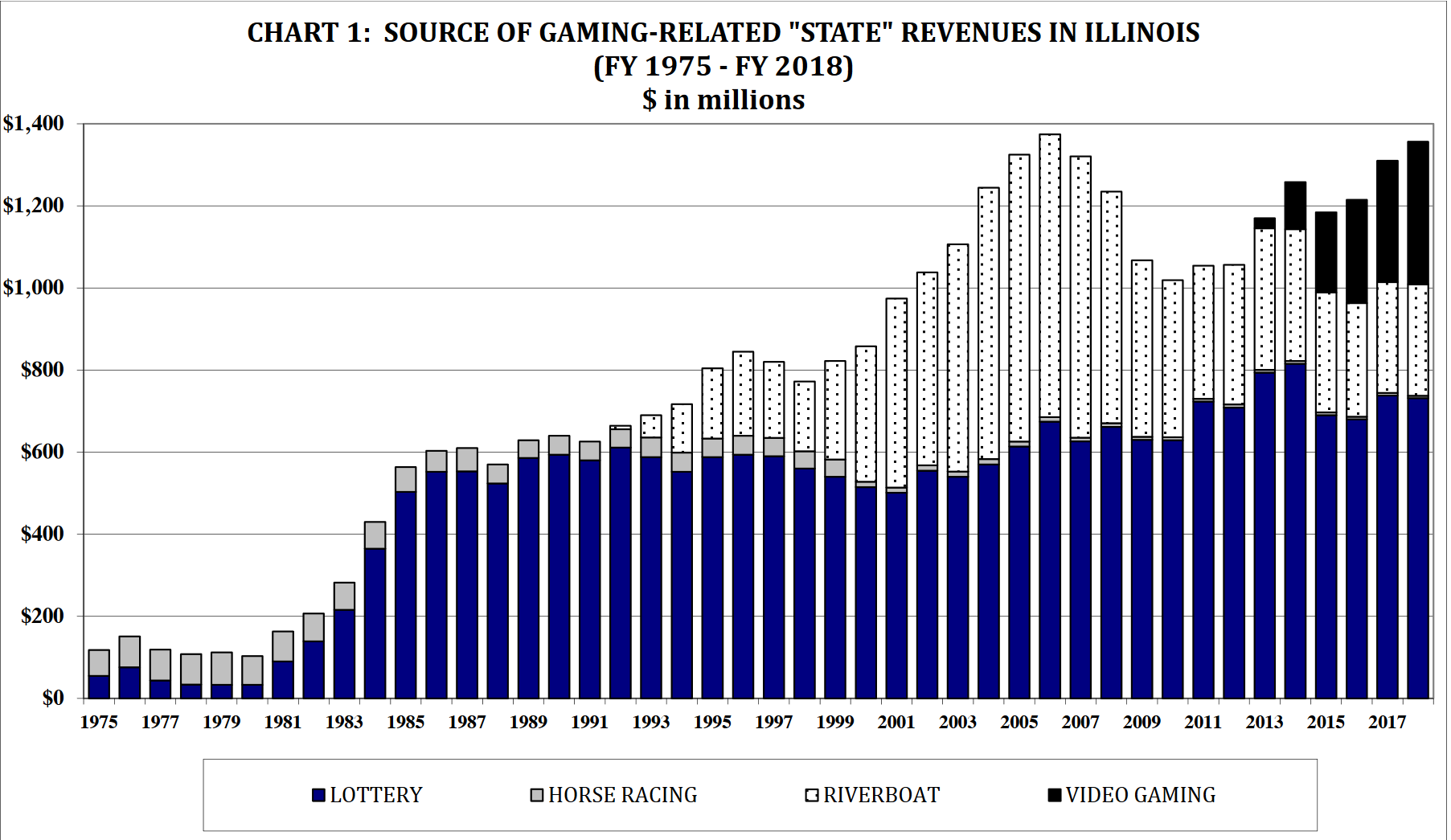 Clearly, more gambling in one form means less gambling in another. Saturation comes at some point. Maybe Illinois isn’t fully saturated; perhaps certain pockets remain to be picked. Chicago, for example, has not yet allowed video gaming at all and has no casinos. Other factors like competition from nearby states and the economy are important, too, but the COGFA report says expressly that expansion of video gaming hurt the other revenue sources.

The lesson here is about solutions for Illinois’ fiscal crisis. More gambling almost certainly will be authorized by the state next year. Potential new sources include sports betting, fantasy sports betting and internet gambling, although detailed proposals haven’t crystallized yet. Revenue estimates will come for those new sources.

Don’t take those revenue estimates at face value. The full result may be just like we’ve seen with video gaming. Ask whether those new forms of gambling revenue will cannibalize other sources.

Marijuana legalization, along with expanded gaming, is widely expected to be the first source of revenue the new General Assembly and Governor-elect Pritzker look to. Maybe there’s logic to linking them. Bummed about how much money they lose gambling, maybe grass will chill them out. Then, stoned out of their minds, they won’t care about losing still more.

Or maybe a real cloud computing tax. Not on a kid downloading a game or dad getting a Netflix. The REAL cloud money is in all the businesses spinning up their servers on the cloud instead of keeping their own hardware in house. That cloud tax potential makes the financial transaction tax idea chump change.

Why stop at weed, include heroin and coke and crack! Look at all the money Il could make

Why is there no discussion about the way Illinois white late taxes alcohol? When my family comes here from Ohio I load up on booze to take back. Maybe the alcohol distributors have a strong Lobby in Springfield?

Saturation in gambling revenues, eh? Then we’ll move onto weed!! 😉

Chicago will probably open the doors to it’s first mega casino the day a mega recession begins. Hence, the casino will loose money.

“Marijuana legalization, along with expanded gaming, is widely expected to be the first source of revenue the new General Assembly and Governor-elect Pritzker look to. Maybe there’s logic to linking them. Bummed about how much money they lose gambling, maybe grass will chill them out. Then, stoned out of their minds, they won’t care about losing still more.” Yes, just what we need, more stoners who have lost their incentive and imagination in a state already run by those whose only incentive is using their imagination to create “more money for me.” Of course the chips and snack industry should… Read more »

I’m old enough to remember when the ethics surrounding the lotto was hotly debated because “gambling is an addiction that destroys families.” Look how far we’ve sunk. Before this is over the two biggest industries in Illinois will be video gambling and marijuana dispensaries.

A casino is Chicago, run by the City of Chicago? Then you may as well have convicted child molesters run day care centers.