Take a look at WAND’s online poll asking, “Do you believe Gov. JB Pritzker’s budget proposal is the right move for Illinois?” 89% say no with 3,800 votes cast at this point. Online polls are very unscientific but, sheesh, that’s quite a margin.

It won’t get any better for Pritzker as reality and math sink in further, especially after he is forced, as we hope we will be, to get specific on his progressive tax panacea. It’s a hoax. And pity Chicago’s next mayor who will face similar realities. 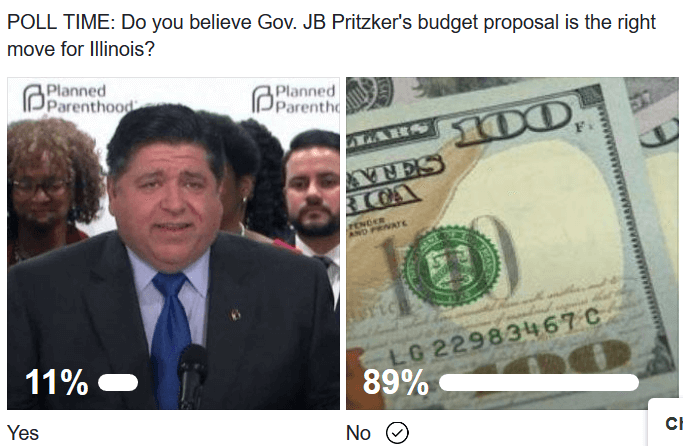 No it’s isnt right or good for Illinois. I support two things to fix the budget, first term limits and second make cook and the collar counties the 51state.

People living in large homes need to start downsizing if they must stay here at all. Expensive homes will be the first to lose value as the pool of available buyers for such McMansions and tax bills shrinks. The next generation of millenialls wont bale you out either, their spending style tends to be more experiential than material. Town homes, condos and good homes just under the median may actually increase in value. Downsizing often even gets you more useable space, because you are forced to be organized. Big cavernous living rooms are a waste. Just some advice before the… Read more »

They need to put warning labels on the CAFR’s of Illinois and a few other states, like the kind you see on the side of trucks, indicating combustibles or compressed gas. Maybe something like this, to indicate a sinkhole of debt.

The ignorant voters will remain ignorant if the gov can borrow enough to delay judgement day. If he can’t, he’s in for a very rough ride. There will be no sympathy from me for the gov or the voters that elected him. If you want my respect, leave Illinois asap. It’s now the only way to send a message to the gov and the liberal voters. Don’t forget to stick your hand out the window as you cross over the state line and extend a goodbye finger.

When I left Park Forest in ’72 end of High School, parents moving to Pasadena CA and I went to college in L.A. County, I was sad to leave my friends, etc. But every 10 yrs going back to Rich East HS reunion, it was obvious Park Forest was getting worse and worse. Big govt and excess taxation and regulation ruined the suburb, completely. Hard to feel sorry for folks who always voted for bloated, wasteful, overpaid, inefficient govt, and unionized to boot !