If you understand nothing else about Chicago’s budget, learn these few, basic numbers on its pensions and property taxes.
The chart below is from the city’s new proposed budget and reflects the historic property tax increase everybody is fretting about. It shows that 60.7%  — about $786 million — of those taxes are budgeted to go to pensions in the coming year. 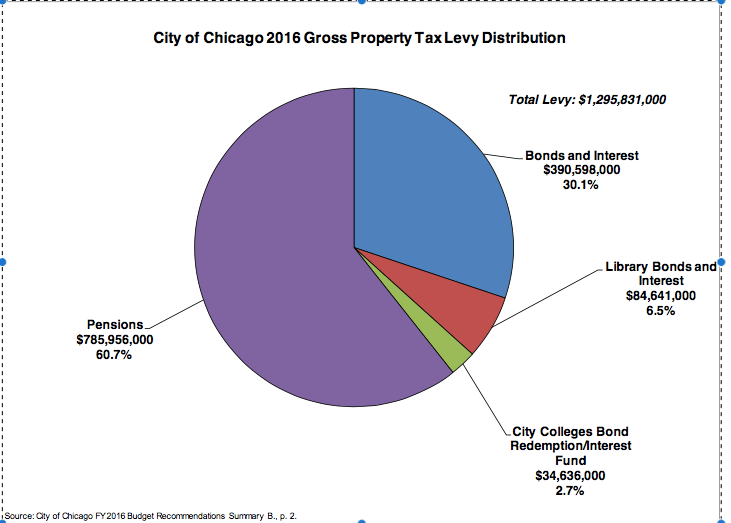 But remember that’s not nearly enough for the pensions.  The city would have to be contributing $1.7 billion, not $786 million, to begin funding its four pensions properly, and even that’s using the phony official assumptions and accounting public pensions regularly use. (That $1.7 billion is the Actuarially Required Contribution, as compiled from pension actuary reports on page 74 of The Civic Federation’s new report released today on the city budget.)
Now, if the city raised property taxes to cover that actuarially required $1.7 billion, its total property tax levy would go from from about $836 million for the 2015 fiscal year, to $1.26 billion projected for next year that assumes the historic tax increase gets passed, and then to $2.2 billion to cover the total ARC payments. This would be the result: 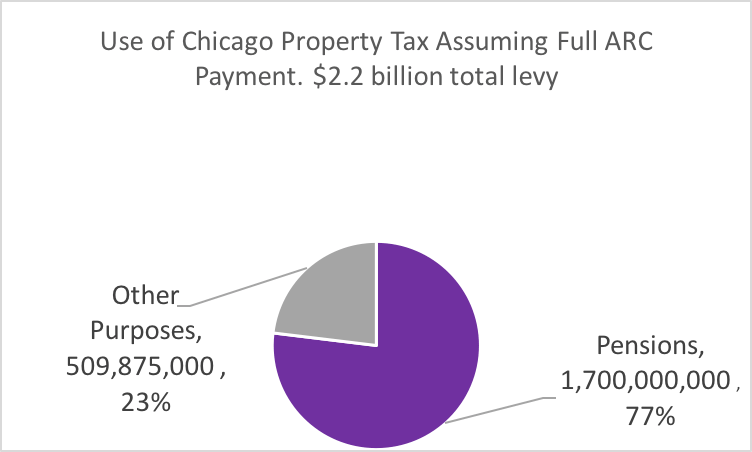 In conclusion, Chicago’s property tax would have to go up by 2.6X from last year’s levy just to cover the city’s four pensions, and 77% of the resulting total would have to go to those pensions. Again, that’s assuming the actuarial assumptions are fair. They’re not. It does not address other elements in the city’s deficit, the school district and other overlapping municipalities.

Got a problem with any of that?

*Mark Glennon is founder of WirePoints. Opinions expressed are his own.
8 Comments
Newest
Oldest Most Voted
Inline Feedbacks
View all comments
Santiago

But those charts are just the property tax portion of the city’s budget, right? I think it might help to show the total budget with income and expenditures as different pies. It won’t be as extreme, but if property taxes only make up like 20% of Chicago’s budget, you can imagine hiking other taxes to pay into pensions.

Right, just the property tax and, yes, that’s about 20% of revenue. You could indeed do the analysis as part of the entire budget, which might appear to dilute the seeming importance of the pensions but, personally, I think that would be less informative. The property tax is probably the only significant potential source of new revenue, with the garbage collection fee already being in the works. That remaining 80% of revenue deserves a story unto itself because it really represents nickel and diming in the extreme. Probably not much room for expanding it. In any event, the true deficit… Read more »

I’m looking at the City of S**tcago payroll right now. The city has 32,182 employees with a total payroll of 2.547 Billion dollars. Exactly what are they giving up? It’s 2015 and they have 20 blacksmiths? Each making $90,000 a year? How many horses does the city have? Tree trimmers making 74K? Auto mechanics making $95,000 a year? No wonder my taxes are so damned high.

Actually, blacksmiths fabricate metal parts to fix and maintain equipment. Whether or not that includes horseshoes is unknown by me. But you point is well taken regarding the other salaries. I highly respect all these skill sets, but at some point there has to be a correlation to what the market will bear for these skills. How much does an ASE Master Technician at a Ford dealership with similar experience make, benefits and all? What is the job turnover rate for a city mechanic versus a private sector mechanic? Is the city auto mechanic at $95K that much better than… Read more »

While the end (coming soon) will be sad, perhaps seeing these workers lose most of their promised pension & benefits will be the impetus to get OTHER City’s Public Sector Unions to agree to VERY VERY material reductions in FUTURE Service pension accruals.

Throwing good money after bad. Rahm just wants to be OUT of office before the scam implodes, and by this fraud he can accomplish that short sighted task. What he SHOULD do is step up and make HARD choices. Cutting all $100K pensions by 40%. Cutting all $70K-$99K pensions by 40%.Cutting all $50K-$69K pensions by 20%. Would it be a massive it- you know it would, but WHO else is going to pay and WHERE will the $$$ come from. Not out there.

That’s about right, and you are especially right about Rahm’s thinking. Just kick the can for a few more years so that, when he leaves, he’ll say, “I made tough choices and headed off the downfall I inherited.” Good luck with that.