Many Illinois progressives openly favor California’s progressive income tax structure, and Governor-elect Pritzker is committed to taking Illinois at least partially in that direction. Something like California’s approach is key to solving Illinois’ fiscal crisis and funding a wish list of new programs, we’re often told.

But guess what’s happening in California. Progressives are making headway steering their state a little more in Illinois’ direction on an additional revenue source. They want property tax increases made easier – something that’s been off limits in California for 40 years. That’s where Illinois has excelled, taking its property tax rates to about the worst in the nation – twice the national average. Not so ironically, a former Chicagoan is leading the charge in California.

The Tax Foundation ranks California second worst among states for income taxes. Its one-percenters pay almost half of all its income tax, with rates up to 13.3%. What more could Illinois progressives hope for?

California property owners have been more protected, however. Proposition 13, passed in 1978, imposed tough restrictions on frequency of reassessments and maximum annual tax increases for many properties. Since then, messing with Prop 13 has been a political third rail. Even California’s notoriously liberal lawmakers have been loath to touch it. Consequently, California’s property taxes, while high, are not among the worst in the nation. 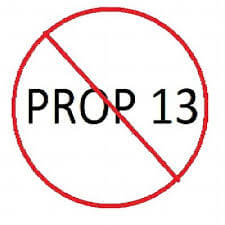 “Proposition 13 is no longer off-limits in California,” said a headline last week in the San Francisco Chronicle. Proponents of chopping Prop 13 down now claim to have enough signatures to get an initiative on the ballot in 2020 that would pave the way for an additional $14 billion in property tax revenue, according to the Chronicle.

And in the legislature, a constitutional amendment is pending that would takes aim at Proposition 58, part of Prop 13’s legacy, which voters approved in 1986. The amendment would eliminate Prop 58’s provisions insulating children from spikes in property taxes triggered by reassessments when parents die.

Perhaps not surprisingly, one of the primary activists behind the proposed changes to Prop 13 is a former Chicagoan, according to the Chronicle. That’s Catherine Bracy, executive director of TechEquity Collaborative, who moved to California from Chicago six years ago. Says Bracy: “For newcomers (to California) like me, who were born after Prop. 13, we want to experience the California dream, too. But we don’t have the opportunity to, because all the goodies have been locked up by the older generations.”

And since California, like Illinois, has more people moving out than moving in, maybe she’s keeping up on the rationale for taxing property in a shrinking state. Property can’t flee, so seize it. That the reasoning behind that idea for a statewide property tax in Illinois, detailed earlier this year by three economists from the Federal Reserve Bank of Chicago.

Also not surprisingly, the League of Women Voters is playing a major role in the attack on Prop 13. As in Illinois, the League in California apparently tossed its identity as nonpartisan and became a left-leaning activist operation.

But is conditioning higher property taxes on cuts to other taxes part of the proposal?

Isn’t that the lesson? Will anything ever be enough?

“Catherine Bracy, executive director of TechEquity Collaborative, who moved to California from Chicago six years ago. Says Bracy: “For newcomers (to California) like me, who were born after Prop. 13, we want to experience the California dream, too. But we don’t have the opportunity to, because all the goodies have been locked up by the older generations.” No! No”goodies” have been “locked up” by ANY section of the CA population except ONE- PUBLIC EMPLOYEES. Bracy is your typical left wing nut, tree hugging commie. The reason CA has the highest overall taxes in the NATION, 90% of them regressive taxes… Read more »

If they ended Prop 13, their real estate values would plummet. It is the only reason to stay. Of course, it limits mobility. Buying and flipping houses is dangerous business because the taxes can only readjust on a sale. Had a friend buy a home in 1985. Hasn’t moved. Neither have the taxes. About the same as they were then. They won’t sell it until they die.

“keeping property taxes down forces California to raise taxes in other ways“ – Odd, we hear the same thing about our flat income tax. Proof positive this isn’t about equity but insatiable appetites.