Make no mistake about where the additional one percent Cook County sales tax will go, along with much more — into its pension. Ninety percent of it will go initially into the pension, according to Cook County Board President Toni Preckwinkle, with that portion decreasing later. But will it?

The pension’s actuary just released its annual valuation report for the year ended in December. That document should be a key item informing voters and county board members about the vote on the tax increase: How much will it accomplish? What’s really going on with that pension?

I’ll provide here some of the basic headlines from the report, which are important, but first there’s a bigger, broader lesson that’s more important, and this is a good opportunity to learn it. Actuary reports are gobbledygook. Few people beyond pension actuaries can extract from them anything much that’s useful.  Reporters cannot be expected to understand them, which is probably why you’ve seen nothing written about this new report. Browse through the report yourself: It’s opaque and obvious questions go unanswered. Go ahead. Look at it. I’m confident that even those among you with financial training will pull your hair out.

The report was prepared by Buck Consultants, which prepares many such annual actuary reports for other pensions in Illinois. We praised them for one report last year when they took an entirely different approach on the Teachers Retirement System, Illinois’ biggest pension. It conspicuously called out problems, ridiculed “Illinois Math” and used a format dramatically different than Buck and other pension actuaries typically use.

For the new Cook County report, they’ve reverted to the old, standard form that’s best suited only for hiding the ball. They are not alone. This one is typical.

First, let’s go through a few things it does tell us — according to the actuary’s calculations, that is. Even some of these would be hard for most readers to extract:

– The plan is 57.5% funded according to the standards the actuary applied. It’s unfunded liability is $6.5 billion. That’s 4.3 times the total annual payroll the county pays.

– The annual “actuarially required employer contribution” from the county for 2015 is $639.8 million, or 43% of payroll. That’s the total taxpayers should be paying on a actuarial basis, as Buck sees that, including an amount sufficient to pay off the unfunded liability over 30 years.

-The plan assumes its asset will return 7.5% annually.

– One thing the report does conspicuously say, in bold face, is that a new funding policy is needed. That should be obvious, since actual funding compared to supposed actuarial funding is short by a stunning $450 million.

Now, let’s put that in context and ask a few questions:

The unfunded liability comes to about $5,000 for a family of four in Cook County. That’s just the unfunded portion owed for benefits already earned, for just the one Cook County pension (Chicagoans are on the hook for 11 more).

The additional payment to the pension beyond what’s being made under current law, around $450 million, is roughly what Preckwinke says the sales tax increase would raise annually — $473 million. So, almost all proceeds of the tax increase would indeed have to go to the pension. Most of it — $513 million — would be part of a 30-year payment plan to pay off the unfunded liability. Preckwinkle says 90% of the tax increase would go towards the pension in the first year, but why would it go down after that, as she claims? It does not look that way, and the report doesn’t help us determine what out-year contributions would really need to be.

What about healthcare obligations to county retirees? [Update: those are included in the pension numbers, which is unusual for Illinois pensions and easy to overlook.]

What happens if you assume a lower rate of return on assets? Say, around 5.5%, like the private sector would use? Or maybe 2.3% — a risk-free rate which really should be used since pension benefits are promised risk-free? The report doesn’t say. Most don’t. Using those more realistic numbers could easily double the unfunded liability and required contributions. And, as one actuary who looked at the report wrote to me, “If there’s a stock market correction, they’re REALLY toast.”

What’s happening to “Tier 2” employees in all this? As you may know from our earlier piece, employees hired after 2010 get much lower benefits and their annual contribution actually exceeds their own pension cost — they are forced to pay additional amounts to keep down the unfunded liability owed to Tier 1.) How much of that is going on here? No mention of that, unlike that more comprehensive report for TRS mentioned above. 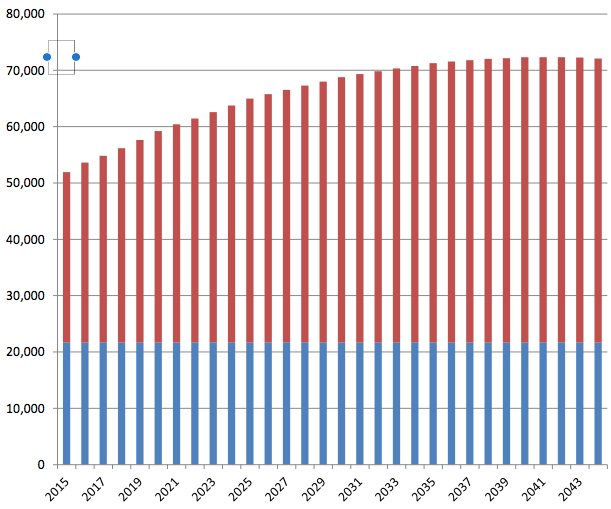 Lastly, think about what Cook County is contributing to employee retirement compared to your employer. If you’re lucky, maybe your employer is kicking 3% or so of your salary into a 401(k). Well, Cook County is paying over 40% of payroll into its pension.

A few conclusions. Yes, that sales tax increase will be sucked up by pension costs and, yes, those costs are astronomical. No, we can’t have any confidence how bad off the pension would remain even with the tax increase and, no, the actuary’s report doesn’t explain much. To repeat our usual mantra, public defined benefit plans are hopelessly opaque and fundamentally incompatible with open government and fiscal planning.

Updated 7/15/15 to reflect passage of the sales tax increase.

The separate pension and retiree healthcare actuarial reports referenced in the June 20, 2015 Buck Consultants letter are not on the County website, only the combined pension and retiree healthcare actuarial report is on the County website? Here is some more information from the 2014 Actuarial Valuation Results section of the Cook County Pension Fund website. The text in that section of the website is in 7.5 point font with a fuzzy almost unreadable chart, compared to 10 point font for most the rest of the site. So intentionally or not the following actuarial information as it appears on the… Read more »

The opinion page 1 indicates that retiree health costs are included see below For purposes of GASB Statement No. 67 and GASB Statement No. 43, we have performed separate actuarial valuations of the pension benefits and retiree health insurance benefits provided by the CEABF and have prepared actuarial reports based on these valuations. As has been done in past years, we have also performed this combined actuarial valuation of the pension and retiree health insurance benefits provided by the Fund to measure the overall funded status and contribution requirements of the Fund. We believe that such a combined valuation is… Read more »

Thanks. Nice to have thorough readers. My oversight and I am updating to reflect that.

Mark: GREAT ARTICLE !!! These excessive DB pension formulas, too often paid essentially in middle age for many govt workers…..are exquisitely-designed tax deferred schemes that end up soaking the private sector workers who have to work 10 years longer with their minimalist 401(k) plans, and soaking and soaking and soaking. When will the private sector workers revolt in Illinois ? Maybe the SunTimes and Tribune will start comparing their retirement plans to the govt workers, and maybe lead the charge of revolt !!

Luckily that’s why Indiana is right next door.
1% cap on property taxes
Fiscally Responsible government with an AAA credit rating and a 2 billion dollar surplus
Higher Quality schools
More jobs and opportunity
Really its a no Brainier.

If you own property in Illinois you are trapped or sell for less that the valued assessment.