Many Illinois school districts are shutting down in-class learning due to the jump in COVID cases, but another set of numbers argue that schools should stay open – and in fact, open even more.

A Wirepoints’ analysis of state COVID data finds the survival rate for Illinoisans younger than 20 is at 99.99%. For teacher-aged adults between the ages of 20-49, the survival rate is at 99.82%. That’s based on data directly from the Illinois Department of Public Health (IDPH).*

In other words, the majority of those most involved in K-12 education, including both students and teachers, are at far less risk than many have been led to believe.

The plain truth is that we are targeting the wrong group for protection. COVID risk is concentrated almost entirely on the elderly and those with certain comorbidities, not on school kids and not on most teachers and staff. We are punishing young people because of a risk to a different group in which children in classrooms play little to no role.

An increasing amount of data shows that transmission in schools is far lower than expected, especially as mitigations and testing regimes continue to improve.

It’s time to redirect our efforts to where the numbers point: Carefully protect the elderly and those with comorbidities and let children resume their education.

There have been 8 total COVID-19 deaths in Illinois in the under-20 age bracket out of a known 80,000 cases. That puts the fatality rate at just 0.01%. Expressed in the opposite way, the survival rate of those who have been infected is 99.99%.

However, the actual survival rate is far higher than reported above because many asymptomatic cases have yet to be detected.

The CDC’s calculation of the true infection fatality rate, including its estimation of the number of cases not yet identified, results in a survival rate of 99.997% for those under the age of 20. Said in the opposite way, the CDC’s overall fatality rate estimate for that age group is just 0.003%.

Importantly, it’s also known that those with underlying conditions are the most at risk from the virus. CDC data shows that 94% of all COVID deaths in the U.S. are tied to some pre-existing condition, including diabetes, hypertension, obesity, heart disease, etc.

At least four of the eight Illinois children that died had comorbidities, meaning the survival rate for healthy, young Illinoisans is even higher. (Wirepoints could only access information for five of the eight deaths. Five youth died in Cook County, where its medical examiner publishes data on comorbidities. The state does not provide any detailed comorbidity data whatsoever, so the status of the other three deaths is unknown.)

Unless and until the virus takes a different direction, the data shows that healthy school-age children are at very low risk and should be in school every day.

The survival rate for healthy, middle-aged Illinoisans has also been very high, according to reported case and death data from IDPH. 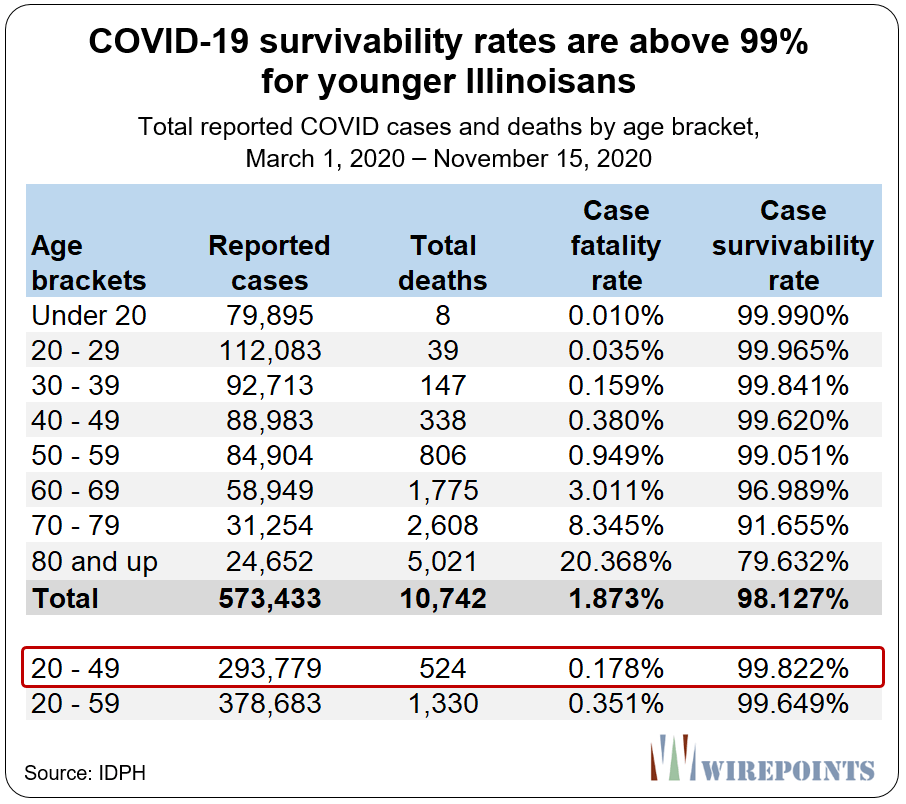 That’s good news for teachers. According to data from the Illinois Teachers Retirement System, 77 percent of all teachers across the state are younger than 50. The data shows they can go back to teaching in the classroom with minimal risk. 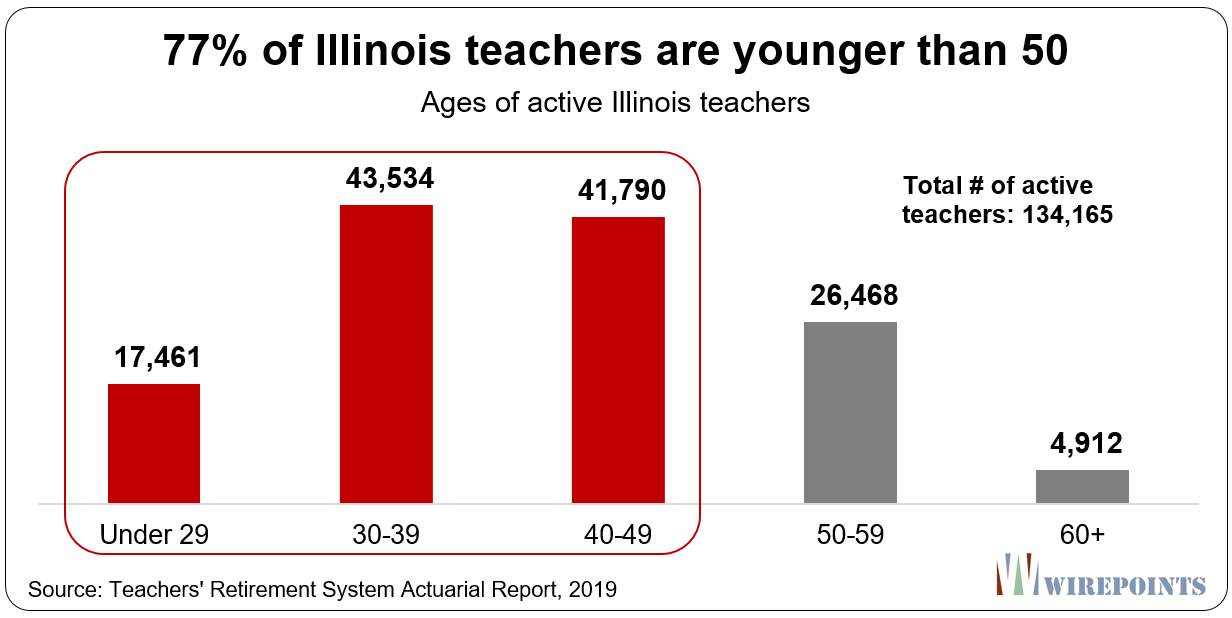 The fatality rate does become more significant in the brackets for ages 50 and above. For those 50 to 59, the rate is a little less than 1%. Teachers in that age bracket should assess their risk carefully – underlying conditions, etc. – to determine if they can remain physically in the classroom.

Students spreading the virus to their classmates, teachers and parents has been one of the biggest concerns about in-class learning since the beginning of the pandemic.

Initial data from around the world was mixed, though a majority showed that transmission rates were very low. Now several months later, more data is in. Emily Oster, an Economist at Brown University, recently wrote in the Atlantic that:

“These numbers are not zero, which for some people means the numbers are not good enough. But zero was never a realistic expectation. We know that children can get COVID-19, even if they do tend to have less serious cases. Even if there were no spread in schools, we’d see some cases, because students and teachers can contract the disease off campus. But the numbers are small—smaller than what many had forecasted.”

That study adds to a growing pile of research that shows children are not major vectors of the virus. For example, Science magazine reported a few months ago that “studies have found that overall, people under age 18 are between one-third and one-half as likely as adults to contract the virus, and the risk appears lowest for the youngest children.”

And a recent article in Nature reported that “data gathered worldwide are increasingly suggesting that schools are not hot spots for coronavirus infections. Despite fears, COVID-19 infections did not surge when schools and day-care centers reopened after pandemic lockdowns eased.”

Fact 4. The elderly are most at risk and should be protected

Shutting schools makes even less sense when you look at who has been most impacted by the coronavirus. The data shows the elderly and infirm are overwhelmingly the groups at risk from COVID.

Illinoisans over 60 have a case survivability rate of under 92% and account for over 87 percent of COVID deaths. They should be the focus of Illinois’ COVID mitigation policies. 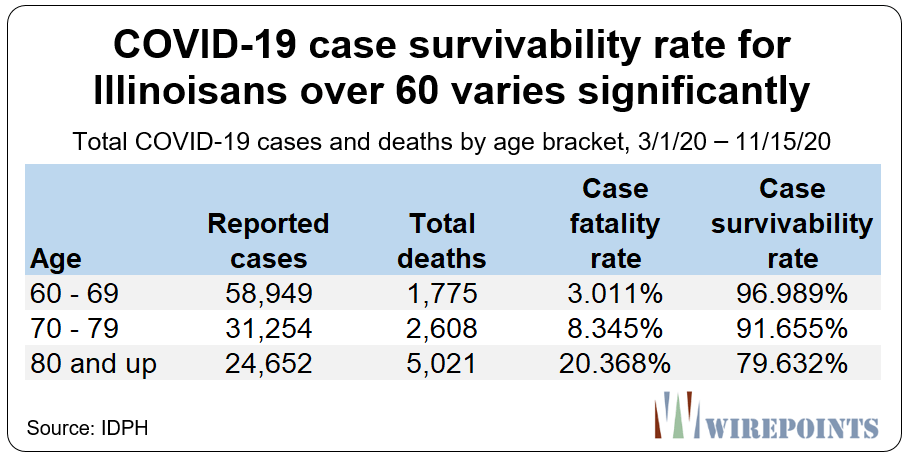 One of the worst aspects of the whole pandemic has been the failure of the state to protect elderly Illinoisans in retirement homes. Over half (52%) of all COVID-19 deaths in Illinois since the beginning of the pandemic are linked to Long-Term Care facilities.

In fact, the most recent data from last week shows that LTC residents continue to dominate Illinois’ COVID deaths. Of the 425 COVID deaths that occurred during the week of Nov. 13, 56 percent were linked to retirement homes.

More and more expert opinion appears to be acknowledging what most parents have known for months: that the harm done by remote learning outweighs the risks of in-class learning.

As a recent piece on NPR noted: “Combined with anecdotal reports from a number of U.S. states where schools are open, as well as a crowdsourced dashboard of around 2,000 U.S. schools, some medical experts are saying it’s time to shift the discussion from the risks of opening K-12 schools to the risks of keeping them closed.”

The recent rise in COVID cases shouldn’t discourage parents, teachers and administrators from doing what’s best for students: returning them to, and keeping them in, the classroom. The science and data show that can be done safely and responsibly for all involved.

COVID-19 is scary, particularly for the elderly and infirm, but unless the virus changes course, the data shows it’s safe for schools to open fully if done safely and responsibly.

The true CFR cannot properly be established until all the cases in a given period have been resolved (either died or recovered). The state currently does not publicly provide detailed data on resolved cases, so Wirepoints is using the crude CFR as the best measure available.

We also recognize that the lag between cases and deaths can have a minor impact on the fatality rate, depending on the overall length of the time period and the trajectory of the virus. See Illinois’ COVID fatality rate plummets for more details.

Appendix. The survivability numbers are even better when you look at the last four months

The survival/fatality numbers shown in the data above include the early period of the pandemic when the number of deaths were at their highest point and very few cases had been identified (only those of sick patients in the hospital). That limited data led to an overstatement of the virus’s fatality rate.

But since then, survivability numbers have changed significantly. There are several reasons why. Today, treatments are far better. Protocols against spread are far better. And testing has increased dramatically, catching far more cases than just those already hospitalized. We covered that in Illinois’ COVID fatality rate plummets.

If we limit the analysis of death and cases to just the last four months, the crude survivability rate for all age groups was 99.094%. That’s almost a percentage point more than the 98.13% for the entire pandemic period. 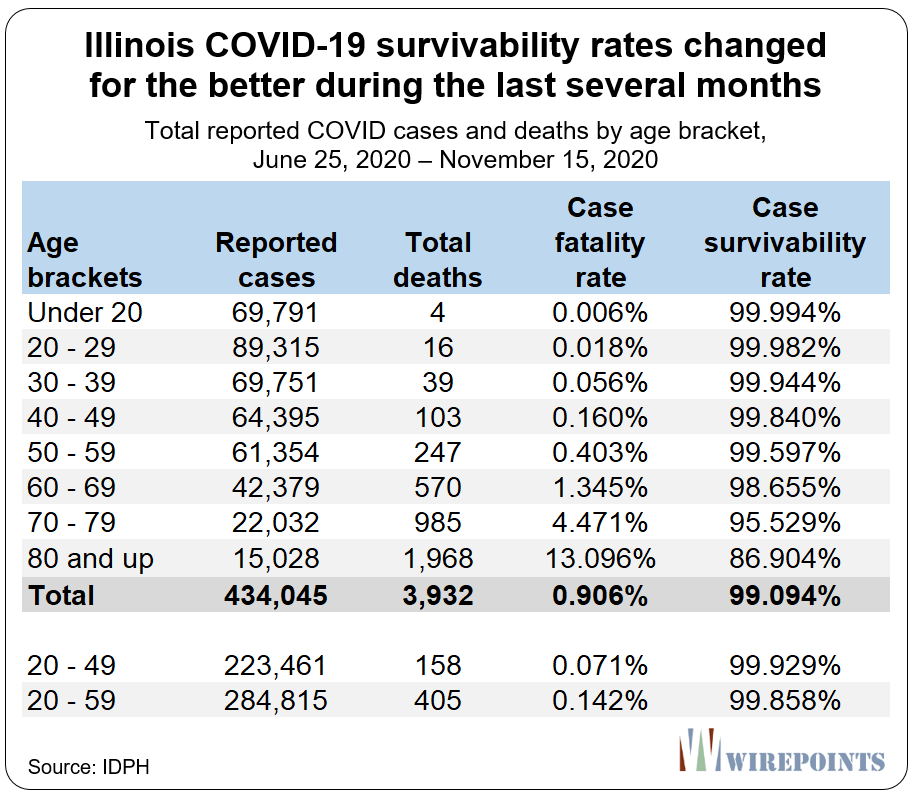 The teachers in unison will say they want to work from home forever, its like being semi retired. Get on a zoom call, read some paper, go have coffee maybe another zoom call later, get paid and get a fat pension. For a few hours “work” and no commuting or offering of real help to students. All responsible parents need to refuse logging onto their schools and get a tutor or home school.

This is supposed to be parody but I’m thinking it’s not –
https://babylonbee.com/news/democrats-pushing-for-schools-to-remain-closed-so-kids-will-be-dumb-enough-to-accept-socialism

So which science is JB and our school administrators following?

There are many online education facilities these days and perhaps we should look at the current situation as an opportunity to move schooling to online providers. The school buildings could be donated to Amazon for warehouses without the usual TIFs given out, the teachers and administrative staff can be laid off and would not only save current costs but as an added benefit the future pensions simply would not be there. Property taxes would be dramatically lowered for everyone. What is not to like?

Every Illinois school parent, teacher should know only what the Dictator tells them

Because this whole thing is a covid-OP, data has nothing to do with anything. The actions have everything to do with other intentions and data are for reasonable people to dicker over whilst evil presses on.

So glad do not have kids in schools.

ABOUT US
© Wirepoints Corp. 2012 - 2020. All rights reserved.
Contact us: admin@wirepoints.org
FOLLOW US
wpDiscuz
8
0
Would love your thoughts, please comment.x
()
x
| Reply