Former Sens. Michael Noland of Elgin and James Clayborne of East St. Louis, both Democrats, have sued the state to unwind years of salary freezes they say were unconstitutional. A Cook County court ruled recently that the ex-lawmakers can proceed with their case against the state. State politicians’ cost-of-living increases, commonly known as COLAs, were frozen by the legislature each year from 2009 through 2016. Nolan and Clayborne originally voted for many of those freezes.

The fallout from the budget impasse also resulted in no increases to lawmaker wages through 2019. As a result, the annual base salary for members of the General Assembly has been $67,836 since 2009.

If the ex-lawmakers’ lawsuit succeeds, the wage freezes between 2009 and 2016 could be reversed and entitle Illinois’ 177 state lawmakers to years of back pay and raises. And if the “freezes” of the 2017-2019 years are eventually rolled in, the total back pay could cost taxpayers up to $13 million.

The recalculated raises would grow lawmakers’ 2020 salary to more than $81,000, an increase of more than 20 percent compared to their current $67,836 compensation.

Illinois lawmakers’ pay would jump past Michigan to become the fourth-highest paid legislators in the country after California, New York and Pennsylvania, based on 2019 data from Ballotpedia.

The ex-lawmakers’ lawsuit alleges the 2009-2016 COLA freezes are illegal because the state constitution says: “A (legislative) member shall receive a salary and allowances as provided by law, but changes in the salary of a member shall not take effect during the term for which he has been elected.”

Some have interpreted the language above as intending to stop lawmakers from voting themselves a pay hike and benefiting from it in the same term.

But Nolan and Clayborne’s lawsuit argues that the constitution’s language prevents lawmakers from making any changes during their term, including reductions. Judge Franklin Valderrama agreed and called the language blocking salary changes “unambiguous.”

The cost of lawmaker back pay

Wirepoints estimated the cost of lawmakers’ potential back pay by looking at the old rules for lawmaker compensation.

Before the legislature began freezing their salaries in 2009, annual lawmaker raises were based on the ECI (Employment Cost Index) of Wages and Salaries for State and Local Government Workers. Basically, state statue said lawmaker salaries were supposed to grow by the average increase in government salaries across the nation.

From a report by the General Assembly’s Legislative Research Unit:

“In April 1990, the Compensation Review Board provided for automatic annual increases in the salaries of state officers, including legislators, to compensate for intervening inflation. Each salary is to increase by the same percentage as the increase during the last calendar year in the Employment Cost Index, Wages and Salaries for State and Local Government Workers issued by the US Department of Labor – up to a maximum of 5% in any year.”

Assuming the court eventually forces the General Assembly to reinstate those the cost-of-living increases for the entire period, Illinois lawmaker salaries will grow to over $81,600 in 2020.

That could cost taxpayers an additional $13 million in total back pay for lawmakers. 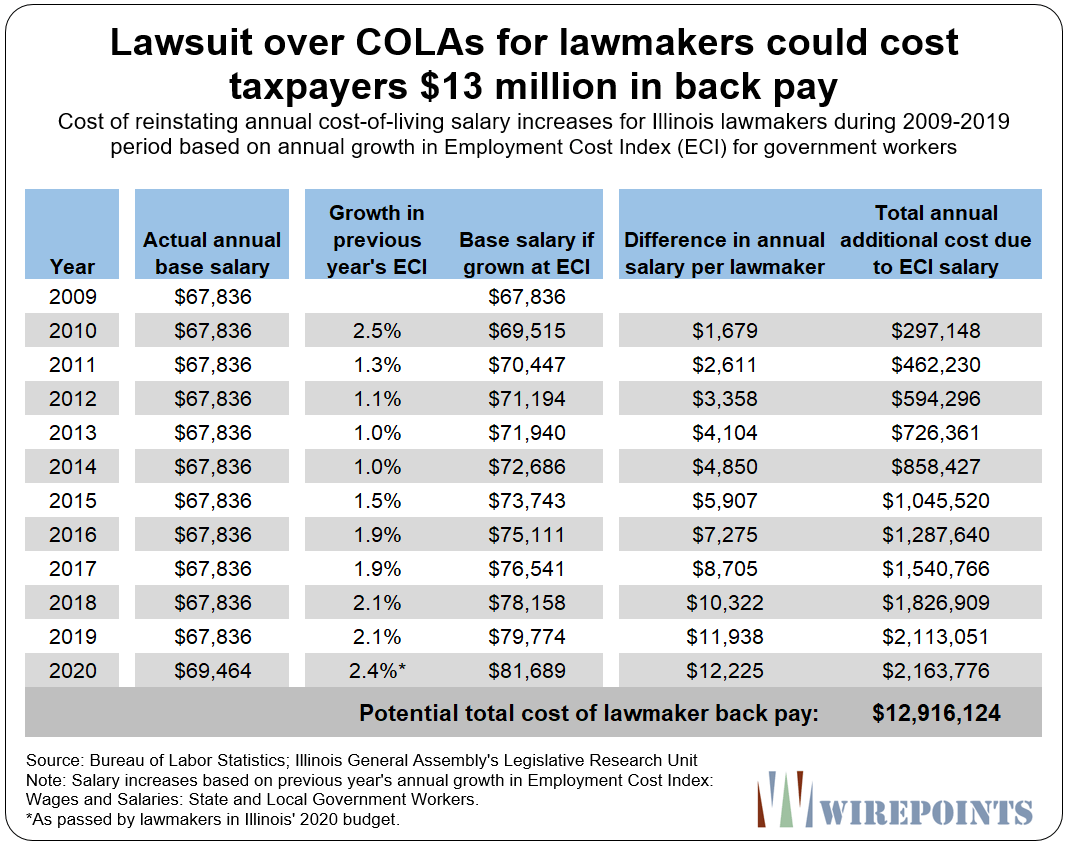 On top of that, taxpayers could also be forced to pay penalty interest on the back pay.

And worst of all, those higher salaries will end up boosting the pension benefits of lawmakers by hundreds of thousands of dollars.

An average career lawmaker retiring in 2020 at age 60 can expect to receive more than $375,000 in additional pension benefits over their retirement if their 2020 salary is boosted to $81,700.

Legislative salaries were already slated to go up next year because the 2020 budget included a controversial $1,600 pay hike for lawmakers. The Senate’s version of the budget bill included a COLA freeze, but that freeze was mysteriously removed in the house version.

The final budget was passed without the freeze, so whether the former lawmaker’s lawsuit prevails or not, Illinois politicians will still receive a pay hike next year.

The $13 million in potential backpay for lawmakers – as well as the associated higher pension benefits that come with higher salaries – is a trivial cost in a state that consistently runs deficits in the billions.

But it serves as yet another example of how Illinois politicians’ incompetence and mismanagement have created the nation’s worst fiscal crisis. Lawmakers can’t even figure out how to freeze their own salaries.

Read more about the salaries and benefits Illinois lawmakers grant themselves:

If each responder would forward the article to ten friends and ask them to pass it on, a lot of clear and powerful information could reach a lot of voters in a few days.

But who else are you going to vote for? Orange Man Bad, so must vote Democrat.

The politicians in Illinois are overplayed, discussing, greedy, worthless people. I’d like to see them try to live on $1100.00 pension. Let them try to keep a roof over their head, heat and a/c due to health reasons, food on the table, clothes on their backs, toiletry items, wash their clothes in a bathtub, afford insurance and dozens of other needs. They waste time, money, and produce nothing but more trouble for the people of the state.

They have a part time job, they are not doing their job that they were hired for by not balancing budget alone. They should not get a raise and if it was allowed, they shouldn’t get paid at all but state constitution requires salary to be paid. Also, politicians should give up their pension fund (only 15% funded anyway) & if they want pension, fund it out of their salary. Can we sue politicians for not doing the job they were hired to do & get money back from salaries?

Part-time job. I wonder how many days they actually work.

They don’t deserve a raise.

STOP SPENDING MY MONEY! MY PAYCHECK HASN’T HAD A COST OF LIVING INCREASE IN OVER 5 YEARS WHY SHOULD YOURS!!! ANSWER ME WHY SHOULD YOU!!

These greedy Bastards already make 3 -4 times what I do. They show up for work OCCASIONALLY where I do every day. These Pricks should be taking pay cuts since the State is in the hole so far we have to sell marijuana to even have a chance to stabilize.

And since it’s the state of Illinois, you know they’ll find some way to FUBAR that one, too.

Because they feel themselves ABOVE us.

Can’t wait until next year when we become Hoosiers. Goodbye and good riddance, Illinois!

salivating over the coming state collapse when no pension or salary gets paid to any gub person. Can’t come fast enough.. yumyum.

Wait, former Democrat legislators want to hide behind the “unconstitutionality” of politically expedient votes they took (possibly gaining voter favor back then), to now collect a windfall of taxpayer money, for a vote that they themselves should have determined the legality of before proposing or voting for? I hope the Republican party stands strong and calls out this Democrat taxpayer fraud and demands the comptroller fight this judge. Shouldn’t our state constitution protect taxpayers, not enrich legislators, or lobbyists who work one-day as a teacher to qualify for state pensions?

we know, that even if none of the repubs weren’t rinos that will benefit from whatever the increase is, there aren’t enough to vote to make any difference. That lawmakers are suppose to protect the taxpayer?? HAHA like lighthead and her sanctuary city, let the criminals rape and murder, police stand down and hand over your worked for assets, taxpayers, to the illegals. RIGHT NOW!

I can not begin to express my disgust for Illinois lawmakers. Count me & my husband in on the outflow of citizens to a neighboring state within the next year. To hell with these fools! They do NOTHING to fix the state’s problems that they themselves created. Enough is enough. Time to leave. Sorry family members – if you’re smart – you’ll follow us & leave as well before you’re taxed into poverty.

TLM… somebody in your family has to lead the exodus… might as well be you. The Illinois politicians are counting on the taxpayers to stay so they can be near family. That strategy is starting to fail.

Isn’t a COLA an increase in pay? Mr. Noland argues that not receiving the increase is unconstitutional but he voted to block the COLA’S. So in other words he voted for something that he is now calling unconstitutional and is suing to reverse the effects of that vote.

Revolt or bolt? Is there really a question there?

And they deserve every penny. They were really busy passing “gender neutral” baby killing laws, giving $45,000,000,000 to state unions, and raising your taxes. It was a busy session with a super majority. All courtesy of orange man bad!

WHO IS ORANGE MAN-THE GUY FROM COUNTRY FINANCIAL?

Its Trump with too much fake tan makes him orange. Democrats get so besides themselves when thinking of Trump all they can mutter is ‘orange man bad!’. Angelo Mozillo of countrywide financial was also an orange man too but he’s fallen off the face of the earth, probably for his own safety, after the housing crash a decade ago.

Seems like with most of them, that’s all they can muster. Take Megan Rapinoe for instance: she just keeps parroting the same “racist, misogynist, durr bad person” tripe in absence of any reasonable argument.

Debtsor: Has nothing to do with Trump, dude. Hate to alert you to the truth, but Trump’s busy trying to save our country.

Debstor is simply pointing out what the Democrats’ rationale is. Don’t worry, he’s as much in support of DJT as you and I are.

Don’t worry, he’s just pointing out the rationale of the average Democrat. Debstor is a Trump supporter as well.

I was being sarcastic!

For some reason, my comments keep disappearing. The “Orange man bad” comments are just Debtsor’s way of pointing out how the Democrats try to justify all the idiotic things they say/do. He’sba supporter of DJT just like you and I, Steve-Oh.