A recent ruling by the Illinois courts in the ongoing State vs. AFSCME saga shows just how impossible it’s become for the state to get its state worker labor costs under control. Not only have the courts consistently ignored the dire fiscal situation Illinois is in, but they’ve also ignored the plight of the Illinois private sector worker who must pay for those ever-rising state costs.

Two years ago it was the Illinois Supreme Court that ruled the Illinois constitution protects the pension benefits of government workers,even those benefits that have yet to be earned. That expansive ruling – protecting unearned benefits – has handcuffed the state from reducing its massive pension shortfall. It’s also contributed to the state’s ongoing credit rating freefall and its near junk rating. More than a quarter of the state budget now goes to pension costs and that’s wreaking havoc on taxpayers with higher taxes, reduced services and a dysfunctional government.

Now, the latest ruling by an Illinois appellate court says the state has illegally withheld step increases, a type of raise, from state workers – even though there’s been no contract in place between the state and AFSCME for more than two years. AFSCME has used the courts to deny the implementation of the state’s last, best offer for the past year.

The court’s ruling is the next blow to taxpayers. If eventually upheld, the ruling will force taxpayers to dole out even more money to AFSCME workers who are already some of the most highly compensated of any state workers across the country. And it ignores the realities behind the current impasse between AFSCME and the state.

Here’s what the courts are ignoring:

Illinois is in terrible financial shape. The state is in no position to pay for AFSCME’s demanded step raises, nor for the full $3 billion extra the union’s contract demands would cost compared to the state’s last, best offer.

The state’s 2018 budget is already out-of-balance by $1.7 billion despite the imposition of a record $5 billion permanent income tax increase. Illinois’ state and local governments have a combined, growing retirement shortfall of nearly $400 billion.

And the state itself is flirting with a junk credit rating and all the increased costs that it implies. The state needs to lower its costs dramatically, not raise labor costs.

In total, the average AFSCME state worker received nearly $110,000 in total compensation in 2015. 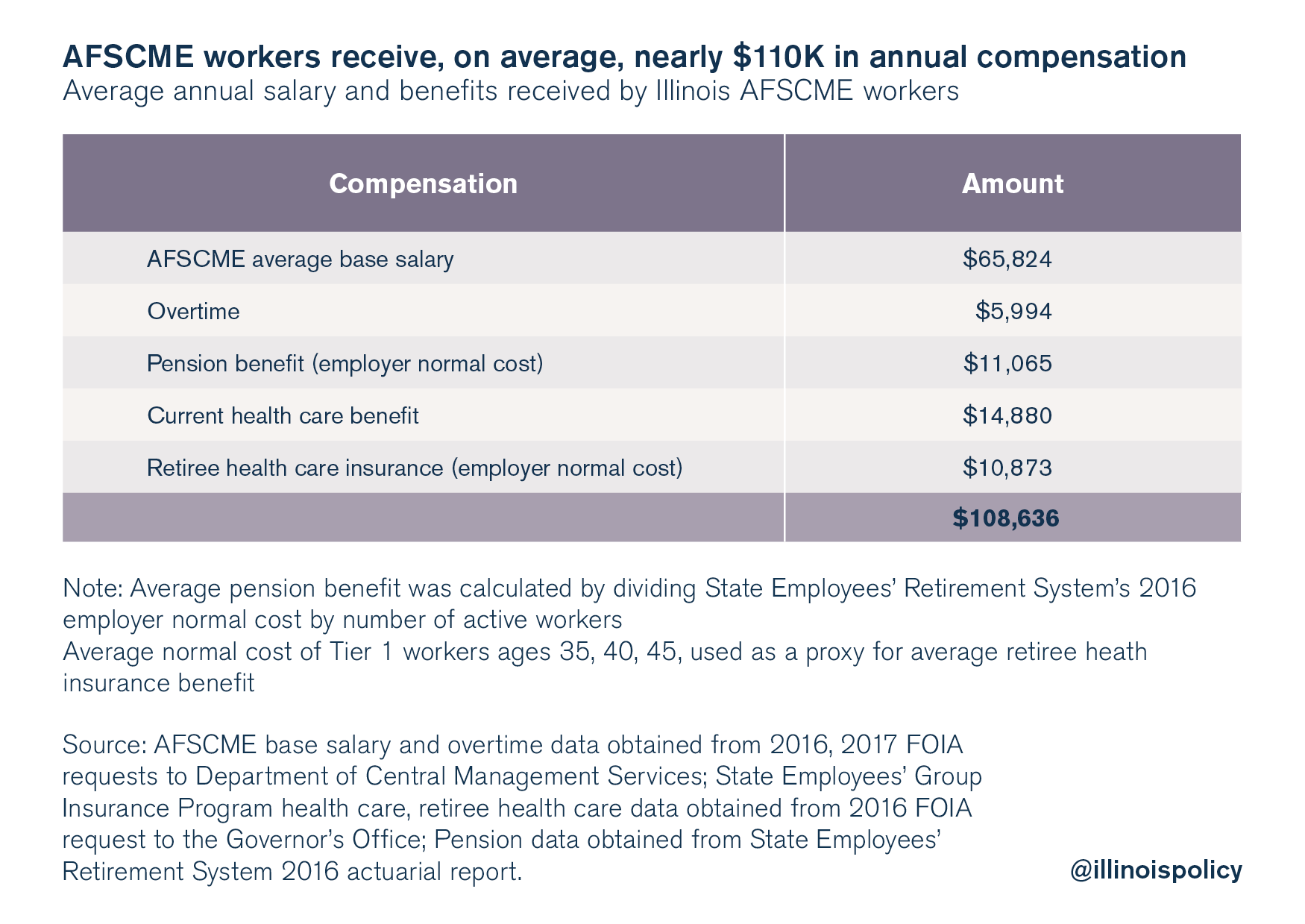 Illinois’ struggling private sector has to pay for state workers’ growing benefits. AFSCME worker salaries have grown significantly over the past decade. The average AFSCME median salary increased 41 percent from 2005 to 2015.

During that same period, Illinoisans’ median private sector earnings remained virtually flat. Factoring the higher cost of state workers and inflation, private sector workers are being forced to do more with less. 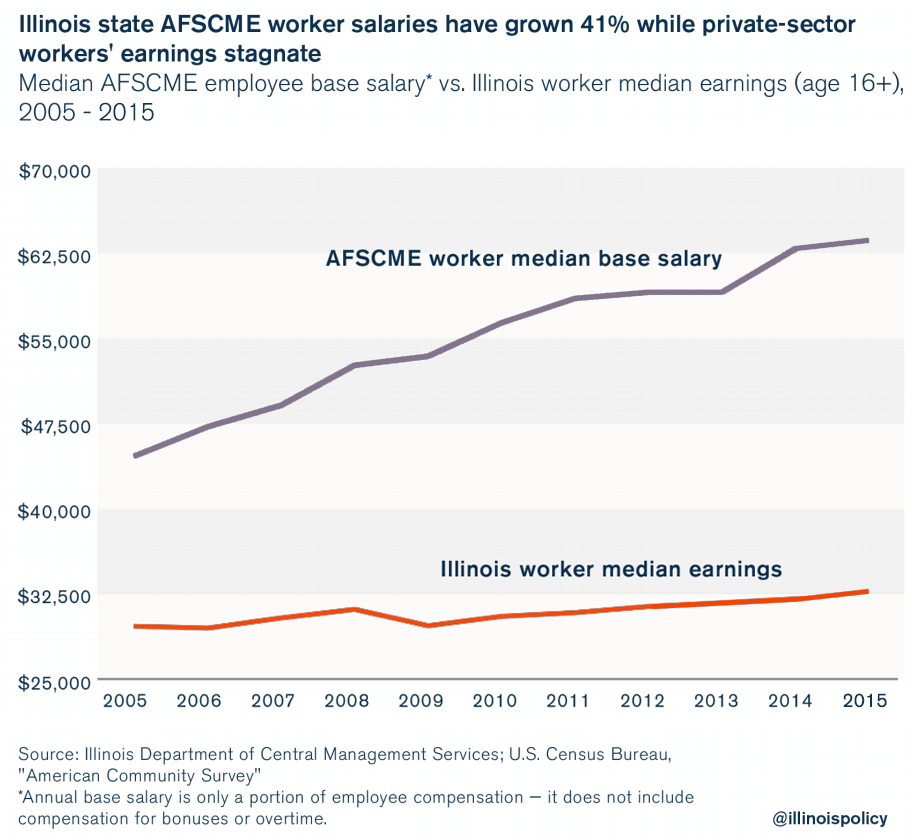 Meanwhile, the average state AFSCME worker received a base salary of nearly $66,000 in 2015. Those employees are part of a broader state workforce that has the highest average pay of any state workers in the country, when adjusted for cost of living. 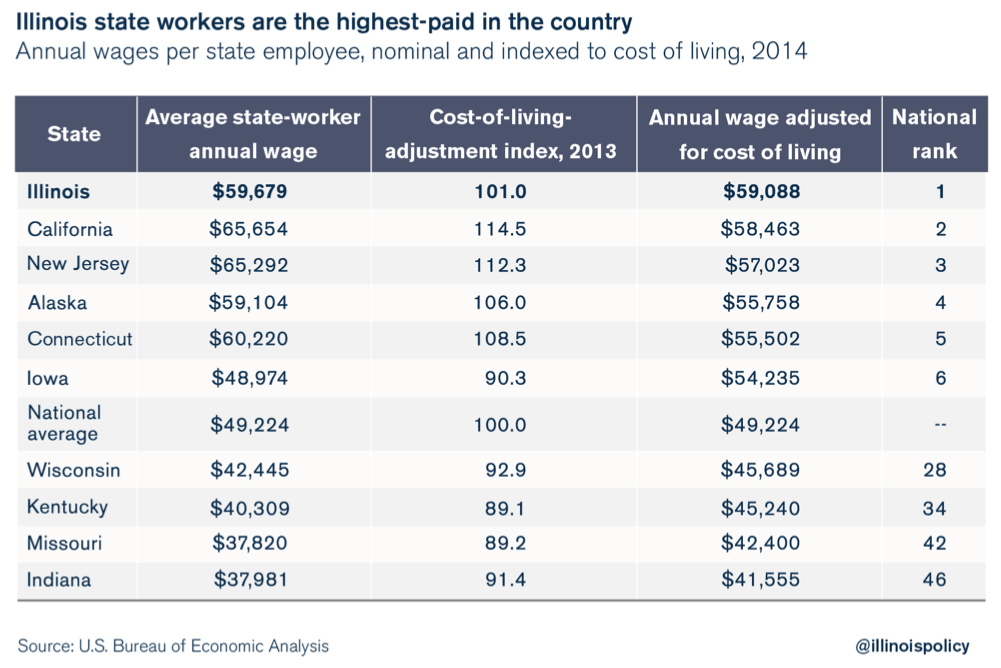 And at the same time that health care premiums are rising dramatically in the private sector, Illinois state workers continue to receive heavily-subsidized health care. The average AFSCME workers has 77 percent, or nearly $15,000, of his or her entire health care costs paid for by taxpayers. 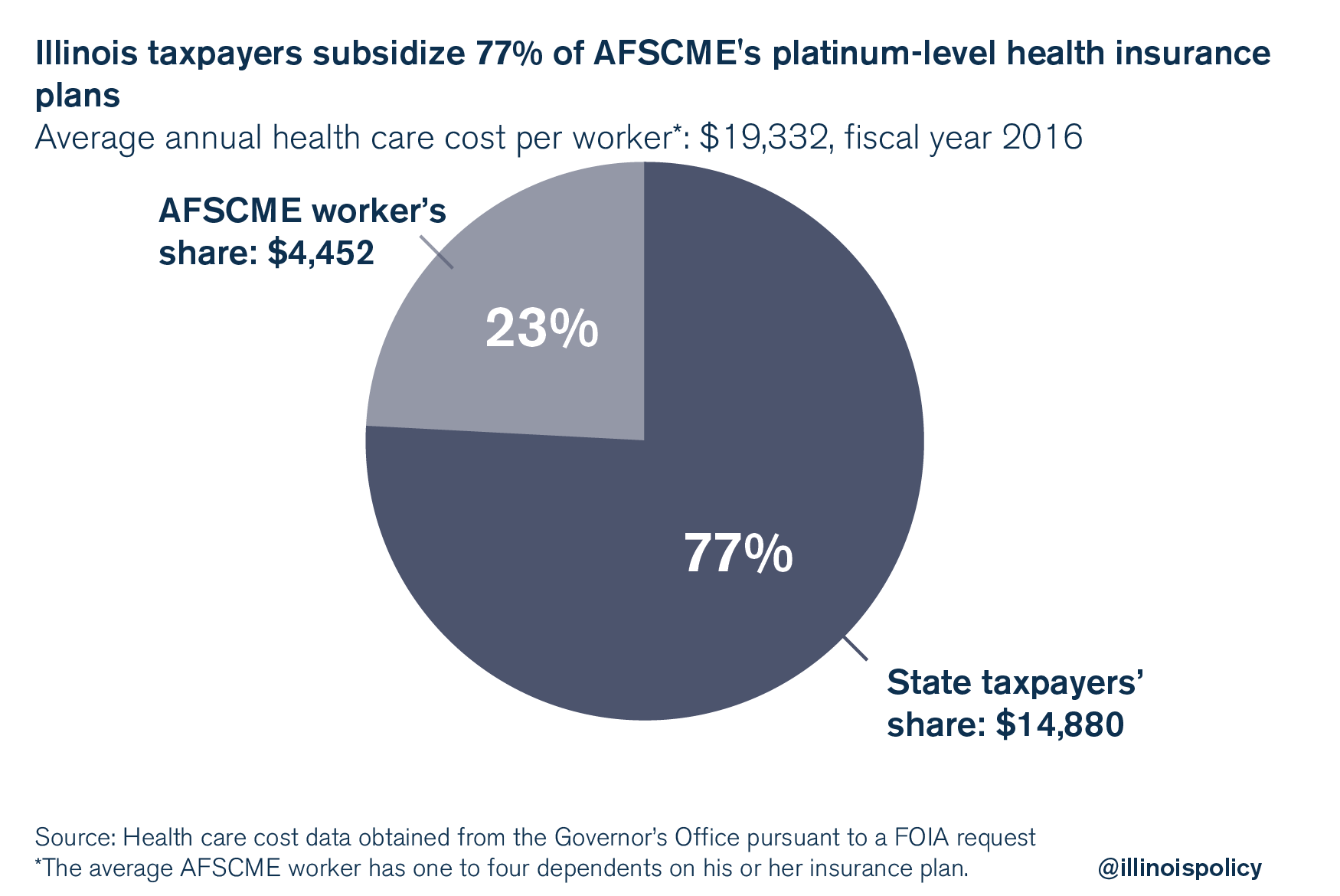 And retiree health benefits are even more generous. The state pays for 5 percent of a future retiree’s health insurance costs for every year the employee works for the state. If a state employee works for 20 years or more, their retiree health insurance costs are completely paid for by Illinois taxpayers. That’s worth anywhere from $200,000 to $500,000 in today’s dollars, depending on the worker.

What’s the point of negotiating?

The appellate ruling hasn’t required the state to make the step payments going forward nor has it ordered any back pay for employees. Instead, the ruling sends the state and AFSCME back to the Illinois Labor Relations Board for review.

But if the state is forced to eventually make these payments while there’s still an impasse in the negotiations, that renders taxpayers’ struggles and the process of negotiations moot.

If workers can still get raises (possibly unappropriated) from an expired contract because the union has blocked implementation of the state’s last, best offer, then what’s the point of negotiating in the first place?

If the state can’t achieve savings by reforming workers benefits, then the only path left open to it is to reduce its payroll. And that means layoffs.

Ted Dabrowski is President of Wirepoints.

Unfortunately for the State, their lack of forethought in agreeing to a legally binding contract is what has them where they are. Campaign lobbying and AFSCME voter power and the willingness of apeasement made this mess accompanied by rediculous Legislative incompetance. AFSCME is merely enforcing legally bindng contractual language. Like any other good business. Whether in the best interest or not.

Where are the salary schedules for the CMS / AFSCME contract that expired June 30, 2015 (the most recent contract).

Can someone please explain to me why the unions are allowed to hold up Rauner’s last, best final offer forever in the courts? That in itself seems criminal, and I don’t see anyone (including here) mentioning that fact. What are the legalities of how long they can slow walk Rauner’s offer in the court system? It is pathetic.

Adam, it is pathetic. The courts too often go against the taxpayers and this case is no exception. Read here to see what my former colleague wrote on AFSCME and the use of the courts. https://www.illinoispolicy.org/afscme-stall-tactics-are-all-political-and-theyre-costing-illinoisans-millions/

Thanks for that! At least I know that no matter what, in the end the system will collapse on the unions. The math wins out every single time. Taxes cannot go up much more, and there is simply not nearly enough to meet the unions’ greedy demands. Pension collapse will one way or another occur.

Ted the courts follow the law. Dont they? They have and they do and they will. Dont besmirch our Justice system with your verbal bombs, the rule of law is a conservative Democratic institution not to be diminished. You diminish a very important civic institution of ORDER when you make the claim “The courts too often go against the taxpayers…” Are you claiming the courts dont follow the law….or legal precedent…or sound reasoning? Or they just out to screw the taxpayers as they too often do? Your words. Your implication is certainly that courts dont follow the law….just …”too often… Read more »

“Are you claiming the courts dont follow the law….or legal precedent…or sound reasoning?”
You seriously ask that about Illinois courts? Ahahahahaha. A little reminder of how our political courts work: https://wirepoints.org/expect-no-guidance-on-pension-reform-from-illinois-supreme-court-wp-original/

Ok Mark, I will try again. Why was the decision in AFSCME v ILRB+ legally erroneous? Why was the court wrong? Was it decided wrong on the facts? Was it decided wrong or the law? The decision read like black letter labor law to me. What did I miss that was error? The Court used a Clearly Erronious Standard and found the lower ruling indeed clearly erroneous. The 3 Judges on the Appellate Court Panel all agreed with no dissent. Were they all wrong? Why were they wrong? What did they get wrong under the law? Under what legal theory… Read more »

My comment was about Illinois courts generally, made in response to your comment about Illinois courts generally. If criticizing Illinois courts is radical then, great, call me a radical. If it starts a fire that can’t be put out, call me an arsonist, too — a proud one. Add them to “traitor” or whatever it was you called me earlier for saying the welfare of people in other states is no less important than that of Illinoisans. As to this specific ruling, I think you are missing the point. Maybe the ruling was a correct application of the law or… Read more »

Well Mark. Sounds like you didnt even read the decision to do your own legal analysis. Its not a hard or difficult case or cloudy area of the law. Straight application of labor law principles with a “Clearly Erroneous” Appellate Standard. Whats interesting to me is your willing to conceed that…maybe the decision was the correct application of the law….but that does not stop your Attack on our Illinois Courts and Justice system. In other words: Judges can apply the law correctly but because you disagree with the outcome, your critical of them. You want them actually misapply the law… Read more »

You need to read what I wrote again. I’ll put my law teacher hat on again. You get an ‘F.’

I think the primary complaint is that the court is not being expeditious. Also and this is the most important the courts failure to take into account the law of economics. There is not a bottomless pit of money– just ask the people of Harvey, IL about the court ruling on its pension. Yeah the courts can rule or take their time in ruling but at some point the law of economics are gonna kick in. This is why it is so important for the justices to bring common sense into their decision to stave off a collapse of the… Read more »