Only in Illinois does a surprise increase in tax revenues and more pension debt equal “stability” for a state’s finances.

Fitch Ratings just improved Illinois’ rating outlook from negative to stable, partly basing its decision on an unanticipated $1.5 billion state revenue surge and an on-time fiscal 2020 budget. It said “the potential for a downgrade in the near term has receded.” See their full summary comment below.

But if anything, Fitch’s points in favor of stability are just the opposite – they actually made Illinois weaker.

Windfall revenues allowed politicians to push off spending and structural reforms once again. And a “balanced” budget based on phony accounting means lawmakers will let the state’s retirement debts grow by billions in 2020. (Illinois’ “balanced” budgets don’t require the state to make its full, actuarial pension payments. See the details here.) 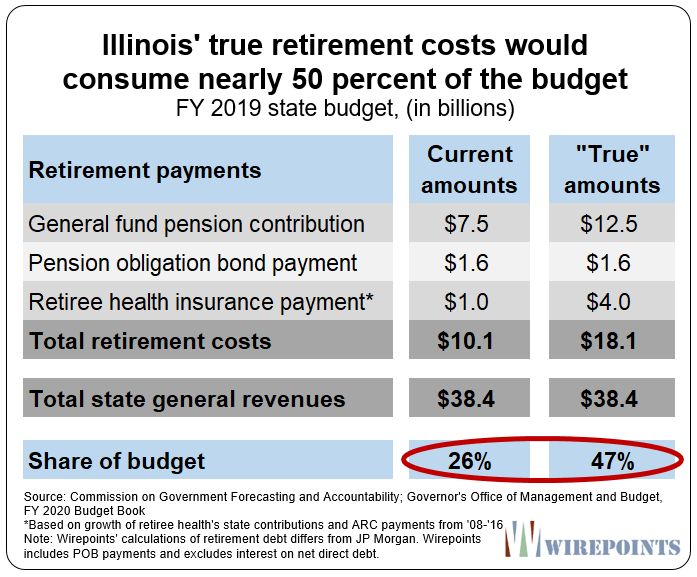 Even more, politicians did nothing to address Illinois’ absolute lack of preparedness for the next inevitable recession. Illinois has no resources to weather a downturn and, along with New Jersey, is the nation’s least prepared state. 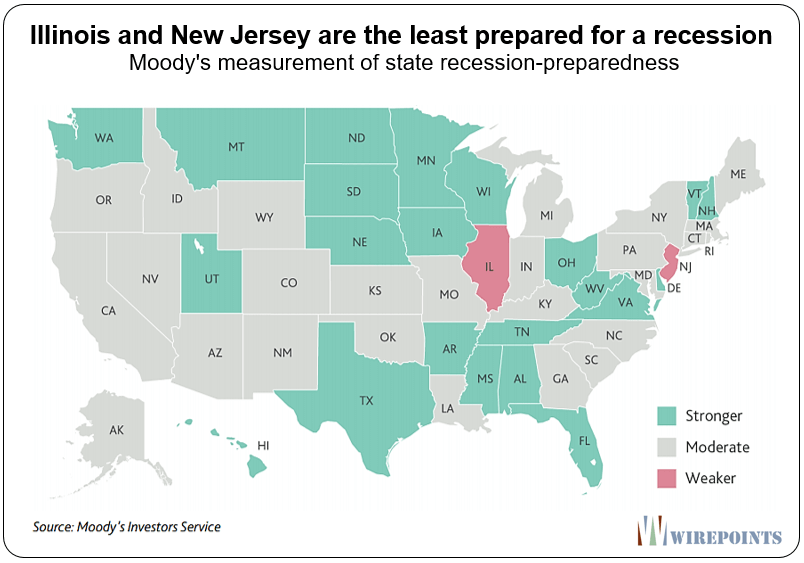 Fitch’s “stable” outlook is for the benefit of bondholders, who may breathe a sigh of relief after years of downgrades. Since bondholders are the first in line to get repaid, they benefit from any short-term games politicians might play. 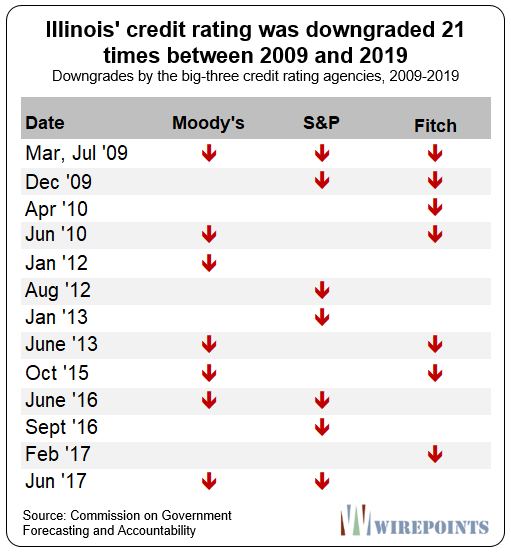 But for ordinary Illinoisans, the situation has only gotten worse. The 2020 budget puts Illinois into an even deeper hole.

The Outlook revision to Stable from Negative reflects key developments over the last three months for the state including an unanticipated revenue surge in April 2019 that positioned the state to resolve a sizable fiscal 2019 mid-year budget gap and enact an on-time fiscal 2020 budget. The positive April revenue surprise seen in Illinois, and other states, supported a significant increase in fiscal 2020 estimated revenues, easing the path to budget adoption and allowing the state to reduce (but not eliminate) reliance on non-recurring measures. The state now has a plausible and achievable 2020 budget plan, leaving it better positioned from a fiscal perspective, and the potential for a rating downgrade in the near-term has receded. The recent gains, however, are somewhat tenuous and their sustainability hinges on the state’s actions over the next several years, particularly around the November 2020 ballot initiative on the graduated individual income tax.

Again the rating agencies have rated the very thing they manipulated. It’s all so cozy. Raters are not fiduciaries, they don’t rate what IS objectively. Rather they rate whatever agreements they managed to coerse from the pols that benefit bond buyers. “Just above junk’ is just where they want to be in Illinois simply because they know they are first in line! Illinois bondmarket is basically now a slave trade. And Fitch is nothing more than a crook running a ponzi.

What’s the point of doing this with a recession around the corner? It’s like painting a room in your house a different color while the house is on fire.

If wall street thinks there is a realistic chance any of these Dem candidates can beat Trump in 2020, we will see a market correction. The really insane thing is that Illinois will certainly lean toward the Dem candidate thereby insuring it’s own doom.

Breitbart has opined that IL is in play in 2020 because of Trump support outside of Cook County and the backlash against the abortion bill. This might be wishful thinking but I wouldn’t doubt that (R) turnout in 2020 is higher than previous years, at least for those few of us (R)’s still remaining in the state. People are really angry about the abortion bill and the proposed gun laws outside of Cook County. Rep Baby Killer might think she’s doing a great job killing babies (and throwing up her fists in celebration) but the rest of the state outside… Read more »

It would be fun to see Illinois in play but like you said, probably wishful thinking.