A Wirepoints review of last month’s COVID-19 data reveals just how flawed Illinois’ response to the coronavirus continues to be. The recent spike in cases has the government shutting down large parts of the state again in a brute-force approach, when its efforts should, instead, be hyper-focused on the elderly and opening up the economy for everyone else.

Data from October shows that the elderly continue to dominate Illinois’ COVID deaths, even more than in recent months. Of the 393 increase in Illinois COVID deaths from September to October, nearly two-thirds came from those aged 80 and over. Illinois’ blanket lockdown policies have consistently failed to stem the deaths of the elderly since the pandemic began, especially those in nursing homes.

Meanwhile, those same blanket bans have destroyed jobs, damaged mental health and caused many other problems for Illinoisans who are far less likely to be affected by the coronavirus. The CDC’s latest projections show a survival rate of 99.98% for infected Americans aged 20-50.

With the elderly still inadequately protected and younger Illinoisans suffering harm disproportionate to their COVID risk, it’s clear the state’s approach to taking on the coronavirus is upside down.

Outbreaks and the elderly

To see how the state continues to fail its elderly population, take a quick look at the average age of all COVID deaths in Illinois over the last couple of weeks. The daily average often reached 80 and on some days exceeded 82 years of age. 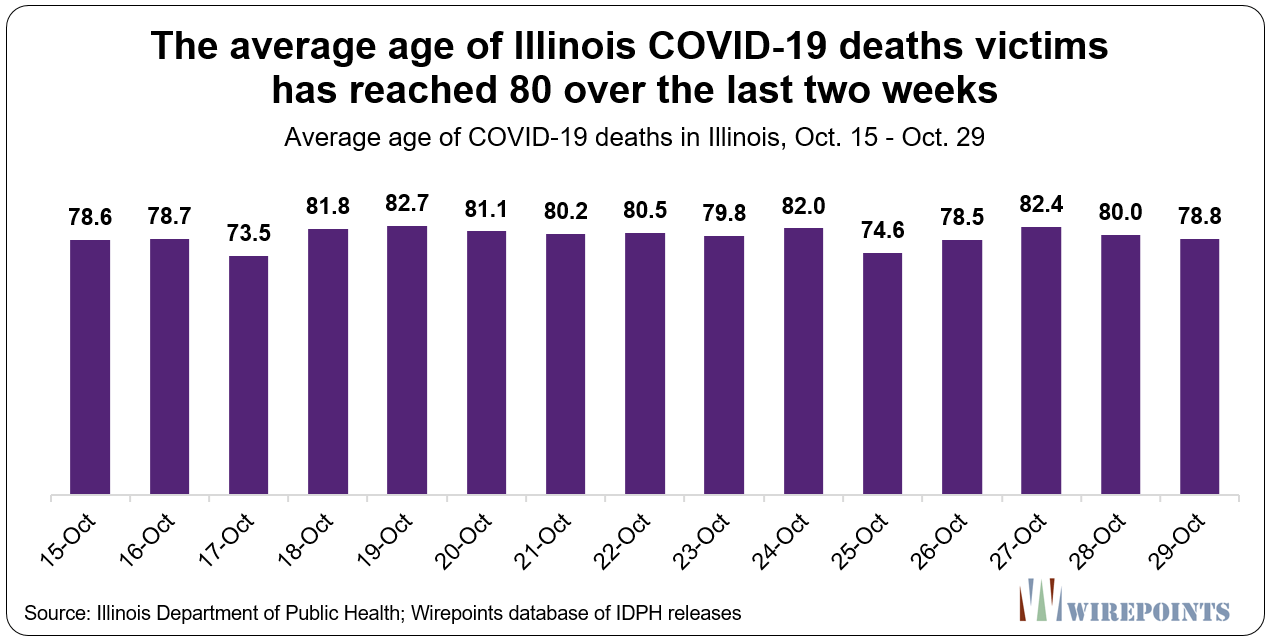 Overall, the age of Illinois’ COVID deaths for the month of October averaged 80, at least three years higher than the average over the entire pandemic period.

The share of deaths by age group in October also reveals how elderly deaths are becoming more dominant. The 80 and older bracket made up 55% of all deaths in October, compared to just 45% from March through September. 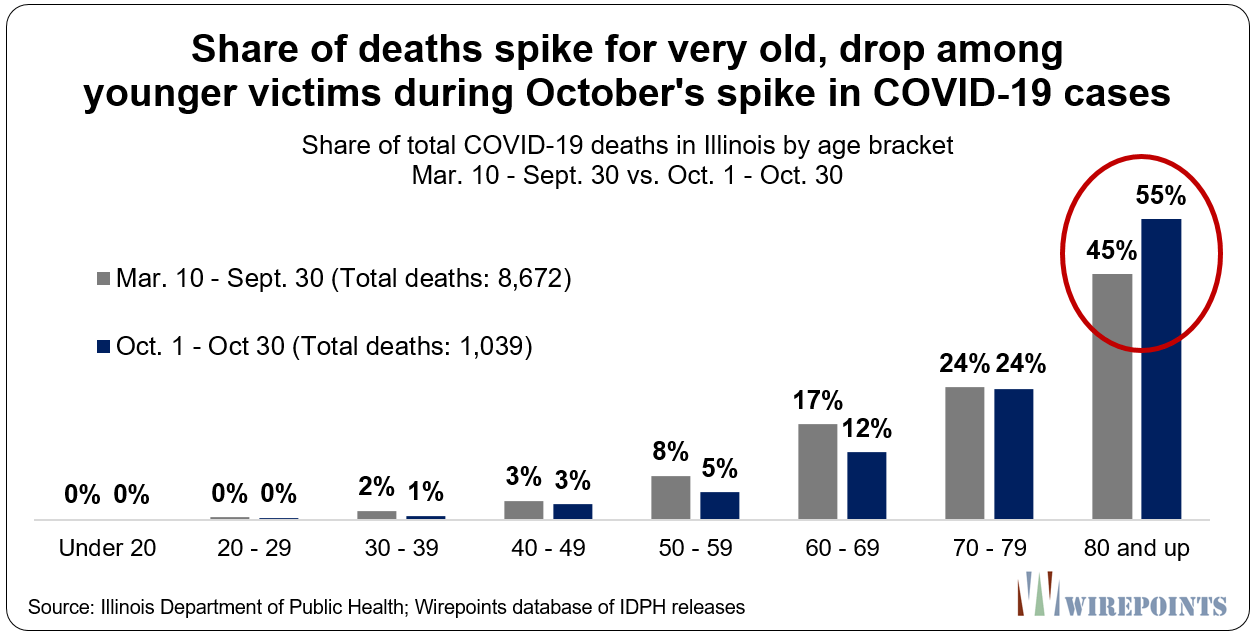 Another cut at that data shows 91% of Illinois’ COVID deaths in October were in the 60-and-older bracket. That’s a major increase from the 86% figure for the period between March and September.

Amazingly, a large number of those elderly deaths are still linked to retirement homes, despite the massive coverage that crisis has received. More than 425 deaths were tied to Long Term Care facilities from Oct. 2 to Oct 30, over 44% of all Illinois COVID deaths in that period.

The fact that the state still hasn’t gotten the outbreaks in Illinois retirement homes under control shows how misguided the return to broad lockdowns is. Instead of focusing time and energy on protecting the specific population that is dying from COVID, Illinois’ efforts are hurting everyone – including those the CDC says have a very low probability of dying.

The CDC recently released their estimates of COVID’s Infection Fatality Rate (IFR) for the country. 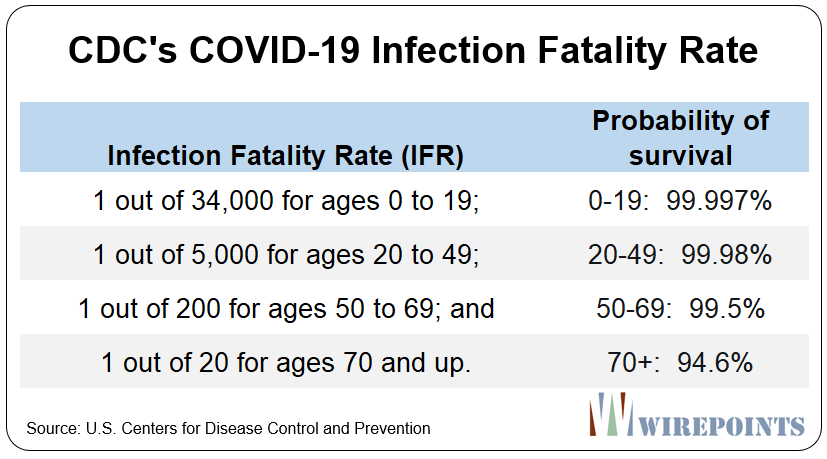 The IFRs show that people between the ages of 20 and 50 have a 99.98% probability of survival if they’re infected. Said in the opposite way, the chance of death after infection for those in that age bracket is at 0.02%. For those under 20, the chance of death from COVID is just 0.003%.

On the other hand, the CDC data also shows that the risk of death jumps to over 5% for those over 70, again making the case that it’s the elderly who are most at risk.

The other demographic the state should focus on are the non-elderly with pre-existing conditions. There are 187 Illinoisans under the age of 40 who have died of COVID since the start of the pandemic. Most of them had one or more pre-existing conditions that include hypertension, diabetes, heart disease and obesity. We don’t know precisely because IDPH refuses to publish the numbers.

However, the Cook County Medical Examiner does provide them for the county. Of the county’s 66 COVID victims under the age of 40 (those which listed COVID as the primary cause of death), 54 had one or more comorbidity. 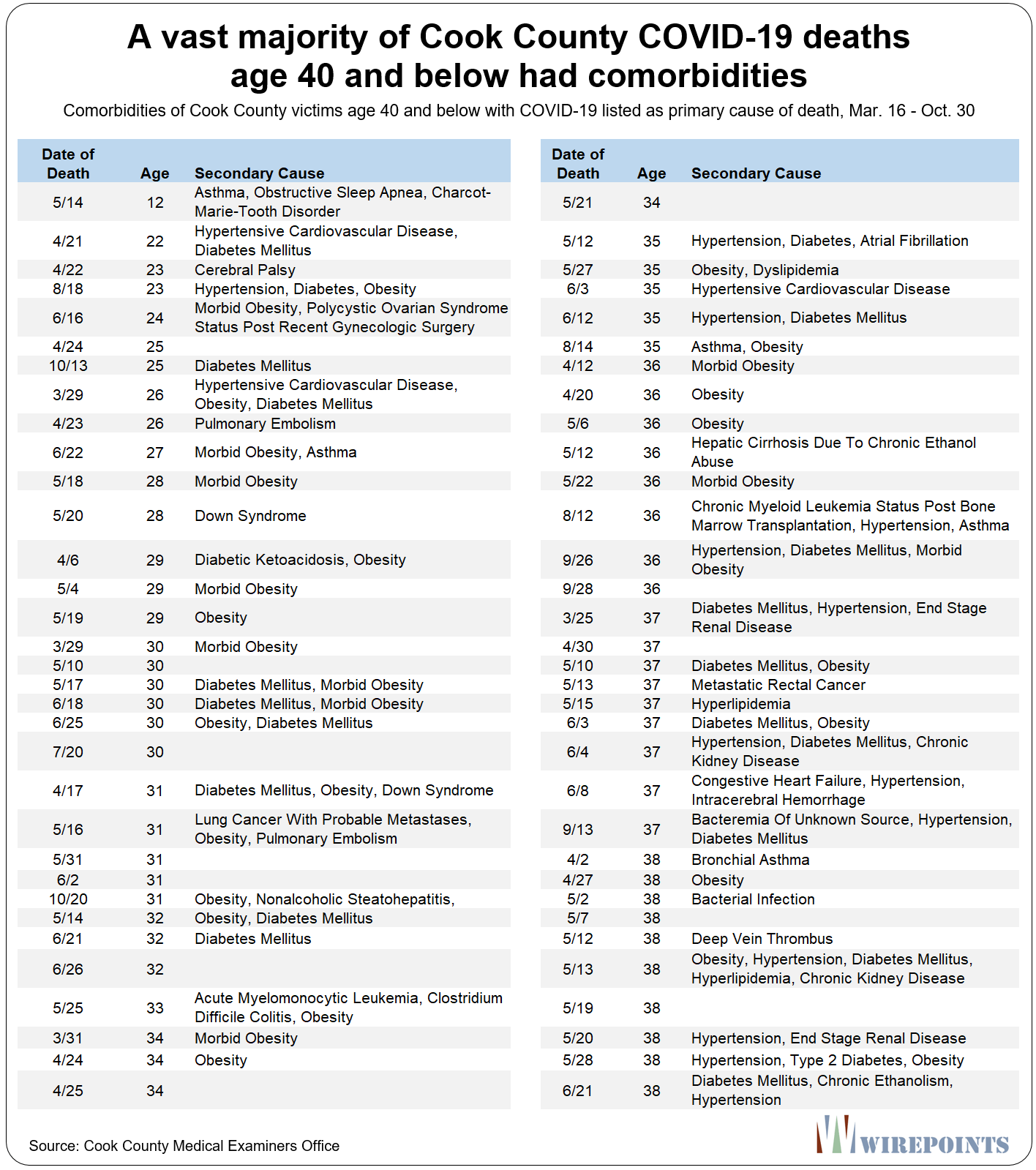 COVID-19 is a serious risk to a far smaller population than the number of people impacted by the state’s broader lockdowns, which we warned from the beginning would do more harm than good.

That viewpoint is now endorsed by signers of The Great Barrington Declaration, which includes many of the world’s top epidemiologists and infectious disease experts.

The state has spent billions on economic and other relief efforts as a result of the lockdowns, but the more effective plan would be to broadly open up the state and spend what is necessary to protect the elderly and the vulnerable. That means obsessing over safety in retirement homes as well as providing assistance to the elderly living among the general public.

Preventing healthcare facilities from being overwhelmed is also key. The state should ensure hospitals have the resources needed to handle major spikes in cases. 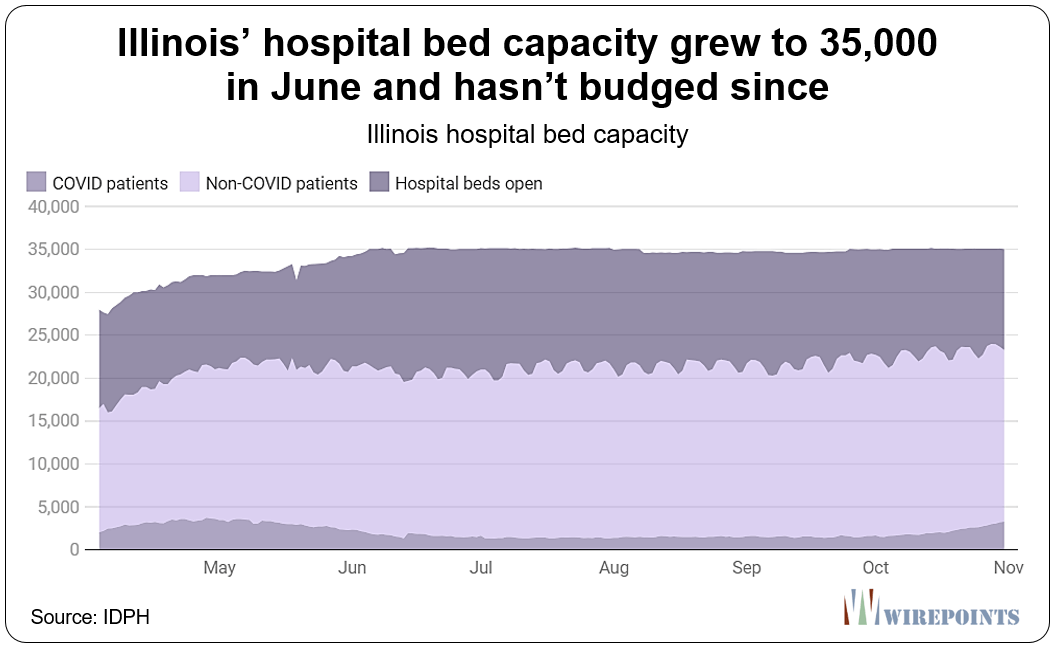 The science and data behind COVID is telling us it’s time to reopen. Until the data proves otherwise – and we should be vigilant in looking out for any changes in the virus – it’s time to flip the state’s COVID policy on its head.

Public “schools” and most “universities” have turned a large percentage of people under 60 into ignorant, frightened fools. Perfect fodder for the evil Democrat liars. What a sad and pathetic way to live.

Disneyland and other theme parks in Southern Calif. have just been hit with a bombshell from Newsom, who is apparently of the same mentality as Pritzker and Lightfoot. The guidelines are that Disneyland can’t open until new cases don’t exceed 1 per 100,000 in Anaheim, according to the color chart. This would basically keep the park closed indefinitely. Anaheim like many cities is going broke with pension costs so the city must be in a panic.

Curious as to the percentage of deaths coming from LTC’s in normal years. My guess is it is roughly 60%.

Great article. I think you meant to start the second to last paragraph with “fortunately”.

So glad I got out of that craphole state last week now in TN reddest state I could find that jerk is screwing up IL for generations to come single handed what a moron!!!

JR, that’s exactly what I did. I looked for a red state that’s not too hot or cold. I also decided on TN. It’s only a one day drive back to Chicago to visit those I left behind.

Congrats on a wise decision.

Two week resident of Indiana now. Took my tax dollars and left. Anyone know of a site like this for north west Indiana?

Take away his inherited cash and that buffoon would be selling balloons in Lincoln Park followed around by a guy with a tuba!

JB, the epitome of snow-plow children, and Dr. O… Who? Yep, a seond rate physician who doesn’t understand that overlap of economics and medicine…

We’re screwed… But, hey, the libs got their guy in Springfield… And, oh, by the way, how is our credit rating doing?

So, it’s only upside down if you consider it within the context of the dual goals of protecting businesses and protecting constituents… His policy does neither… But, maybe by design…

JB is in a roll for which he is mentally unfit. As such, the more damage he does, the higher the likelihood he can roll the dice in his favor for a Federal bailout…

That he has so little regard for people’s lives is all anyone needs to know about that POS.

Keep up the good work JB. Messing with the people is wrong and the truth matters! Reporting only what the Governor wants you to know is the demoncrats way and Un-American!

Another example of government being the problem and not the solution. Will we ever learn??????

Are there any pending lawsuits against the lock-downs, etc. in Illinois? If so, could someone please post links to the websites? I’d like to make donations if possible. Thanks in advance.

JB pritzker-“we follow the science……as long as the scientists agree with me”-this guy is a joke!

Despite the constant calls to “follow the science”, Pritzker and his minions totally ignore actual data that has been known for months. There can be no other conclusion but that this is a purely political power grab.

Just voted – long line. While standing and waiting, shocked at how many people were saying they wish Pritzker was on the ballot!!! People are fed up with his nonsense.

Winnebago County, Rockford, Il, issued a report about the 18 hot spots for Covid. 17 of the hot spots were nursing homes, assisted living facilities and rehab centers. Number 18 was the winnebago county jail. Most deaths were in the 80+ to 100 yrs old.

November 24, 2020
The subversion of democracy by suppression of the free exchange of information and opinion is no longer just a threat. It’s here.
View Comments (12) | Add Comment

November 24, 2020
The strategy of shutting much of the state down – from lockdowns to school closings – has done far more harm than good, in part because it’s taken health officials’ eyes off of the elderly and the infirm.
View Comments (15) | Add Comment

ABOUT US
© Wirepoints Corp. 2012 - 2020. All rights reserved.
Contact us: admin@wirepoints.org
FOLLOW US
wpDiscuz
19
0
Would love your thoughts, please comment.x
()
x
| Reply