Continued from Part 3: $310 billion in accumulated losses from out-migration.

Out-migration data from the Internal Revenue Service shows Illinois’ wealthy are leaving the state at a damaging pace.

On a net basis, Illinois lost more wealthy residents per capita than any other state in the nation except New York.

Though Illinois’ wealthy make up a relatively small share of the people lost to out-migration, they’re responsible for the largest share of income lost to other states. When people leave the state, they take their incomes with them.

In all, Illinois suffered $11.4 billion in outflows and gained just $6.6 billion in inflows in 2016, leaving the state with a net $4.87 billion loss in Adjusted Gross Income. More than 50 percent of that came from losing people who made $200,000 or more.

Again, New York was the only state to lose more income to other states than Illinois did. 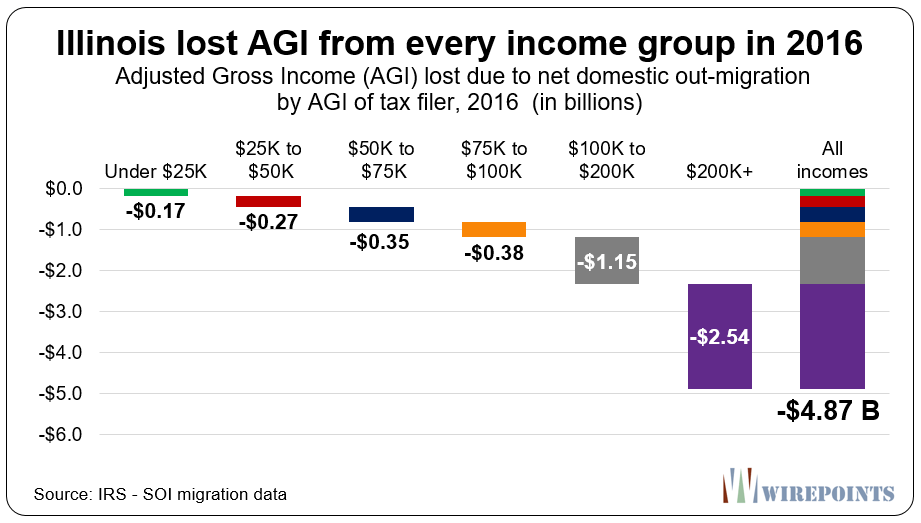 Illinois’ losing trend has been going on for years. The state has lost an average of about 3,000 net wealthy tax filers – along with $2.1 billion in AGI – every year since 2012, the first year the IRS began publishing migration data by tax filer age and income. 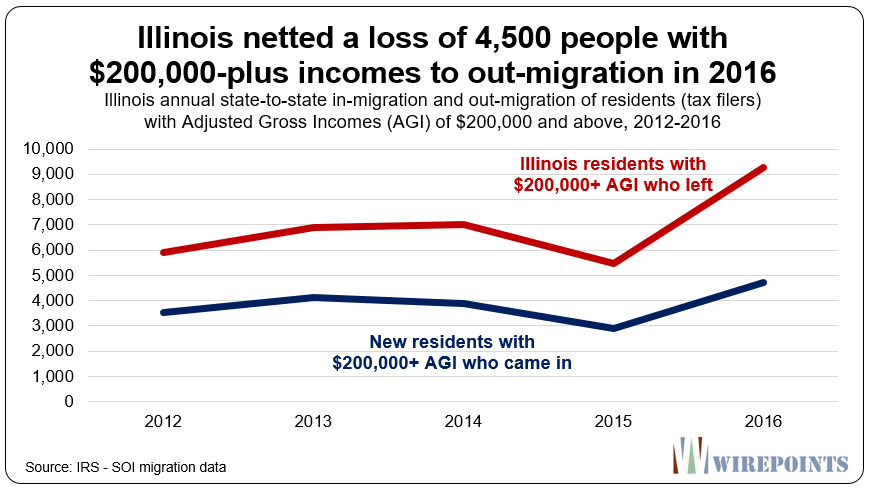 An understanding of the migration losses of Illinois’ wealthy is important since the wealthy are the target of the proposed progressive income tax that’s on the November 2020 ballot. The proposed tax structure would hit hardest Illinois’ wealthiest – those making $1 million or more – with a 60 percent tax hike.

For reference, in 2016 the Illinois Department of Revenue reported that only 20,000 tax filers in Illinois had taxable incomes greater than $1 million. They made up about 16 percent, or $2 billion, of the total net personal income tax revenues.

With so few residents with million-plus incomes – and so many wealthy residents leaving each year – it’s easy to see how targeting the wealthy could very quickly deprive Illinois of its richest citizens. Only a few have to leave to disrupt the revenue promises of the tax-hike proponents.

In Part 5, we’ll look more at who exactly is leaving Illinois. As it turns out, it’s far more than just the wealthy.

Read more about how Illinois is an outlier in out-migration:

A U-Haul is the only answer to Solving Illinois Pension Crisis. Taxes are going much, much higher and services are going down, down, down. Illinois is toast, a goner, DOA.
Run for your economic life. Go anywhere, it will be much better than Illinois.
All the big pension money is going to Texas and Florida to live the good life.
The cops, teachers and firemen have screwed the working man over big time.
20 years of doing nothing and $100,000 year with 3% increases.

I wish I could leave, but I’m not moving away from family. I (wisely, I think) kept my real estate “investment” in IL tiny by comparison to others. If my house value declines to zero, it will be annoying, not catastrophic. As things stand now, my property taxes as a percent of retail value are about 3.5% (that’s tax/sale price decreased by 6% real estate commission.) I figure if they push that above 5% it will lead to a cascading collapse in property value, so we’re already close. In other news, a figure almost as large as the national debt… Read more »

I left and don’t regret a thing, our HHI is in the high 200’s and we are saving ourselves a new car every year in (property, income, sales) taxes alone!

Is there a way to equate the loss in AGI to a loss in state income tax revenue.

I’d bet it’s not that far off of the $310,000,000,000 in cumulative AGI x 5%. There aren’t that many write-offs for state income tax (although that might not be true if you’re a billionaire like JB-the-Hutt. He probably pays next to zero % in state income tax.)

The actual economic impact is worse than just the foregone tax revenue. The top 5 percent engages in a significant chunk of discretionary spending, so the impact on GDP, especially over time, is profound.

While I understand your point, I’m viscerally opposed to “GDP” as a measure of anything useful. If I borrow a $billion and spend it, that’s a Billion in GDP. But the debt I incurred is NOT backed out of the figure, so it creates the illusion that something valuable was created. This is a LIE, perhaps the biggest lie of our times. We are surrounded by economic activity that amounts to paying Alan to dig a ditch and Bob to fill it back in. Alan and Bob may go home with their paychecks but NOTHING OF VALUE WAS PRODUCED. I… Read more »

That’s why I left Illinois! My husband and I were in the middle class category. Together we made about $50,000 a year. We lost our house because between the payroll taxes going up, the property taxes going up and the taxes on food, we couldn’t keep up anymore. Illinois taxed us clean out of state!

Very sorry to hear stories like yours. Hope your new home is working out well.

JaBba is awake. He’s eating cheetos and popcorn watching the show. This is exactly what the state wants – they want a progressive uptopia – and high income earners that complain are only get in the way of that goal. Rauner’s basically left the state at this point, if that means anything to any of us. Rauner – despite his high income – is just an obstacle to abortionists on every corner, legalized weed near every elementary school, and transgender indoctrination of our youth.

I wish I knew what is their goal here. I simply Do Not Believe they are honest in espousing all their Utopian schemes. I think they’re money-grubbing, con-artist parasites, every one of them. But if they turn the state into a complete cesspit filled with people who won’t or can’t produce, dependent on politicians for everything, they’ll be kings…of a state-sized landfill. No, there’s another game afoot here, I just don’t know what it is. Pritzger and his ilk are not fools. They’re master illusionists (as well as parasites.)

I think he should be little bound up by now from not having the need for any toilets.

In my view, you err by your belief that if Mr. Pritzger awakened, he’d change his actions. People at the level of Pritzger are not like us. They literally see us as cattle to be farmed, sheep to be sheared, cows to be milked. That they couch their execration in polite terms is simply a nod to what happens to rulers if they’re too honest about the relationship between ruler and those who are ruled. My question all along is, what do these oligarchs (like Pritzger) expect to obtain from driving the state, the nation and the world into a… Read more »

It’s about unopposed power. There’s a reason why dictators run their countries into the ground and exile (or kill) all their opponents. Rauner has, for all practical purposes, been exiled to Florida. Self-imposed exile, for sure. He still owns property here but he doesn’t live here. The real test will be in 2020 if the national Democrats can tenuously hold their seats in suburban Chicago. Politico had a story the other day about Rep. Sean Casten (Chicago suburbs) and how he’s getting a lot of flak at the town halls over impeachment. Those who show up are really angry with… Read more »

(1) I don’t share your belief in the sanctity of elections. I think IL’s political machine could be in control of elections enough to steal elections. After all, the pollsters and the press are unquestionably in the politicians’ pockets. Who among us is actually COUNTING?! (2) I don’t think anything will change until this 38 year (and counting, it hasn’t ended yet) lurch into monetary-financial-economic madness ends. At every level of society, people are spending “money” they don’t have in order to maintain their living standards. It’s akin to an entire society existing High-on-the-Hog by pawning everything including the kitchen… Read more »

Are the elections competitive enough for suburban Chicago to turn red? Too many races are uncontested.