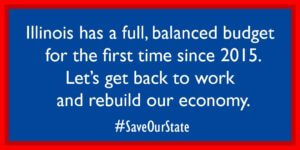 Remember the surge of relief in early July when so many celebrated passage of a “balanced budget” built on the tax increase? Illinois Democrats, especially, were tweeting things like the graphic on the right. Unions like SEI praised the first balanced budget since 2015.

Well, facts are continuing to trickle out. Truly measured, it’s clear the budget is not remotely close to balanced, even with the new tax revenue, though it will be some time before we can say just how bad it is.

Start with last week’s article by The Civic Federation that lists some, but far from all, of the reasons why the real budget is unbalanced. Like all government budgets, it’s really little more than a partial cash flow statement. It doesn’t genuinely measure the state’s deteriorating position. Asset sales, for example, foolishly count as revenue, so the planned sale of the Thompson Center building counts as revenue.

Raids on various funds set aside for special purposes also count as revenue, as the government accounts for things. COGFA’s most recent monthly report had a special section on that saying the budget allowed for $1.2 billion in interfund borrowing and $293 million in fund sweeps for the current budget year, although it’s not entirely clear how much of that should properly be included if an honest budget were prepared.

And how about that upcoming bond offering of $6 billion to be used to pay down part of our $15 billion bill backlog? It was authorized along with the budget but lawmakers conveniently forgot that it has to be repaid. Annual debt service on that will be roughly $600 million per year, and perhaps much higher, but that’s not in the budget according to knowledgeable people I’ve talked to. Gov. Rauner, too, says it’s not in the budget, though at least one lawmaker, Rep. Greg Harris (D-Chicago), says Rauner is wrong and that $350 million was set aside to help pay for the borrowing. (Great transparency, eh?)

Most importantly, the budget does not reflect continued pension underfunding and the growing pension debt that entails. That’s off-budget according to government rules, in contrast to the private sector. Add on at least $3.5 billion for that, just to keep unfunded pension liabilities from growing, even assuming the phony pension assumptions are sound.

By the way, the budget was not balanced in 2015. It hasn’t really been balanced since 2001, and we’ve been gushing red ever since.

Who says manufacturing is dead in Illinois. The Smoke and Mirrors industry continues to thrive!

A quarter point raise in the state income tax generates an extra $1 billion. So IL should have an extra $5 billion from the recent 1.2% hike. Subtract a quarter point to service debt. Subtract another quarter point to replenish the funds moved around via the creative accounting you mentioned. That would leave 0.75%, or an extra $3B to put into pensions, but we’ve already committed to increase lower ed funding by hundreds of millions each year for 10 years. So we’ve already spent the tax hike, and we haven’t even gotten to the usual suspects desperate for more funding:… Read more »