Every month, the Illinois Commission on Government Forecasting and Accountability updates its numbers on how much revenue the state is collecting for its general fund. Its report for September has some good and some bad news.

Compared to September of last year, total tax receipts are up 1.7%, thanks primarily to a 6.5% increase in income tax receipts. Same story for year-to-date totals, which are up 3% compared to last year.

The bad news is that transfers from other funds, particularly the Federal government, are off, more than offsetting the improvement in tax receipts.

Net-net, total income for the state’s general fund last month was down 2.9% compared to September last year. Year-to-date, total receipts are down 4.8% compared to last year.

Fellow wonks, the details re below and the full COFGA report is linked here. 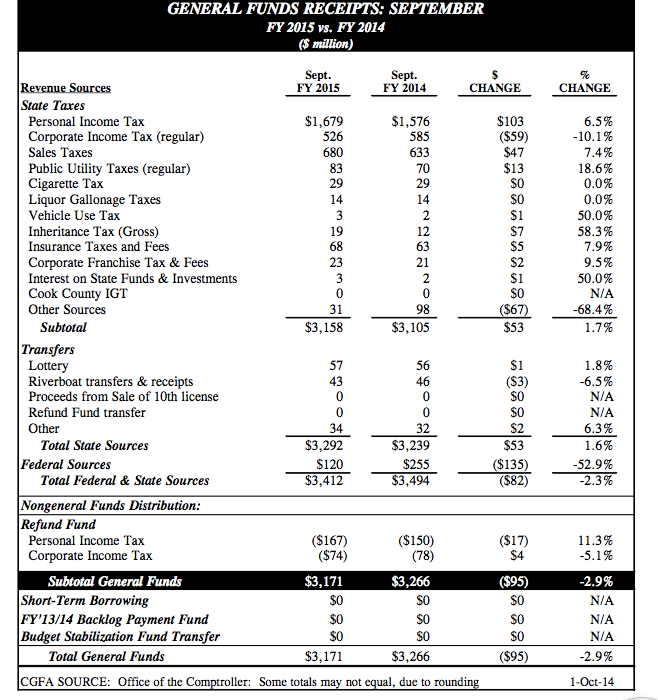 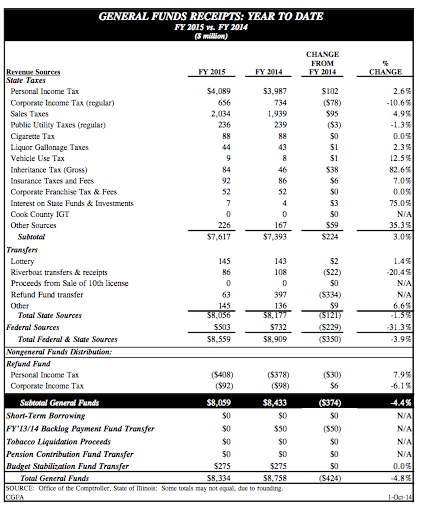 October 26, 2020
It's beggar-thy-neighbor policy at its stupidest. Instead of banning it, the state participates in it through its EDGE program.
View Comments (4) | Add Comment

October 26, 2020
Which amendment should be on the ballot, the progressive tax increase or pension reform? The silence of Fair Tax supporters tell us why they aren’t asking.
View Comments (22) | Add Comment

October 25, 2020
Jefferson's views about cities were not embraced by the nation for 230 years, but that may be changing. Most of his other views were held sacred, but that, sadly, is also changing. Time will soon tell which ones prevail.
View Comments (6) | Add Comment