A new proposal to pay down Illinois’ pension debt by borrowing more than $100 billion from Wall Street should be called out for what it is: reckless.

State Rep. Robert Martwick (D-Chicago) wants the state – meaning taxpayers – to borrow $107 billion so that those proceeds can be given to the state’s pension plans. Proponents of the plan say that the pension bonds would actually save the state $103 billion over the next 25 years.

Martwick’s plan also includes a voluntary COLA buyout which is also destined for failure. But it’s his borrowing plan that deserves the most attention.

Martwick’s bond deal is a non-starter for many reasons.

First, the plan does nothing to alleviate the stress that state debt is putting on the residents of Illinois. Martwick’s plan simply trades out one form of debt for another. That’s not reform by any means. 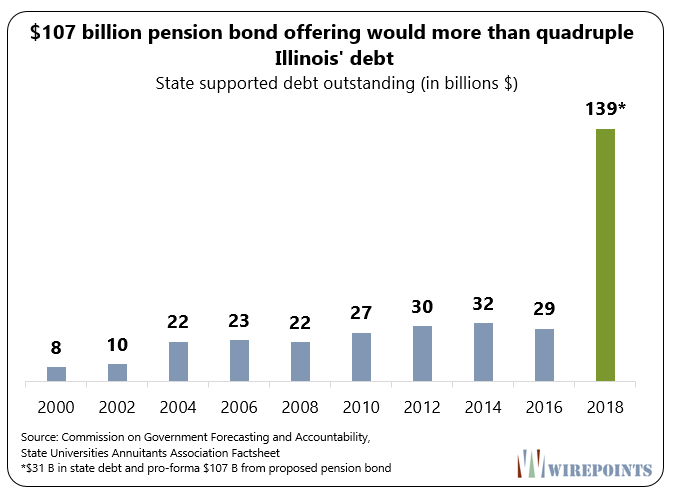 Instead, his plan would curse Illinois with a junk rating. Today, the state already has more than $31 billion in state-supported debt.

Another $107 billion in borrowing would quadruple that bond debt to $138 billion.

With so much hard debt in place, Illinois’ credit rating would suffer and its financial flexibility would be gone.

Today, investors who hold Illinois $31 billion in bonds don’t lose too much sleep over whether they’ll get repaid in the future. Sure the state’s a mess – which is why investors get such a high interest rate – but those investors know they’ll always get repaid before the pension funds do. Bondholders have a legal priority over pensioners when it comes to getting repaid by the state.

But all that would change if Illinois borrows more than $100 billion to fund its pension system. In one fell swoop, any risk of not getting paid would be shifted away from the pension systems entirely – and placed in the lap of every Illinois bondholder instead.

That means if anyone is going to get stiffed by the state going forward, its bondholders. Expect Moody’s to react to that increased risk for bondholders by punishing the state’s ratings. 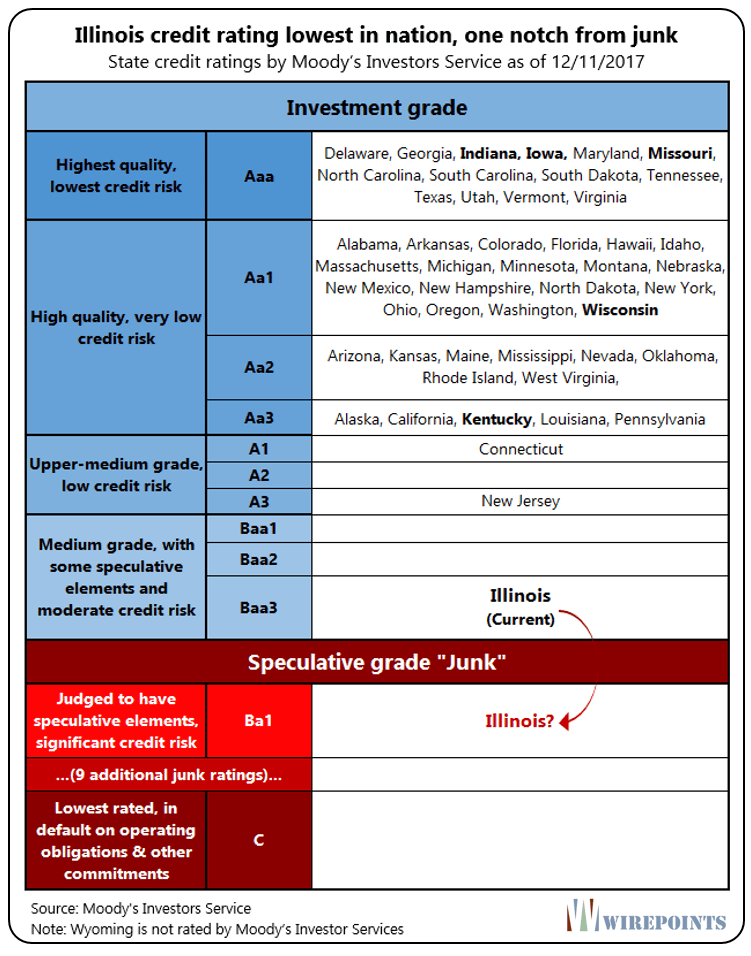 And all it would take is a one-notch downgrade from Moody’s to make Illinois the first-ever junk rated state.

Second, the success of Martwick’s plan is predicated on chance. The $103 billion in interest savings the plan touts is predicated on the state borrowing at a low rate and the pension funds investing at a higher return for the next 25 years. That’s a gamble nobody can predict.

The idea of the state getting a decent interest rate on the bonds is particularly unlikely. Investors are not going to reward Illinois for its audacity.

In the end, Martwick’s plan could end up losing money for Illinois residents. (We spoke to lobbyist John Carr to get details on the plan as originally proposed by the SUAA, but he declined to share any details.)

It would be yet another example of letting politicians speculate with Illinoisans’ money, but this time with $100 billion. Illinois politicians haven’t balanced the budget in more than 15 years. They’ve brought Illinois to the brink of junk. And they created the state’s collective near-$400 billion pension crisis in the first place.

Illinoisans can’t trust their politicians to manage that money.

Third, borrowing more money does nothing to solve the state’s biggest fiscal problem: that pension costs are overwhelming the state’s ability to provide basic services.

Even taking into account the diminished benefits that Tier 2 member in Illinois receive, pension costs will continue to strangle the budget and Illinoisans wallets for another 25-plus years.

The state’s own number crunchers, COGFA, show that pensions as a percentage of the budget will continue to be above 25 percent through 2045. And that’s the rosy scenario. 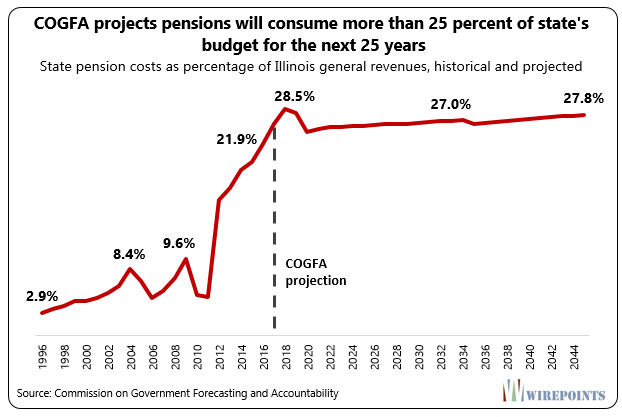 That forecast assumes the pension funds can hit, on average, their 7 percent annual investment returns for the next 25 years.

It also assumes that retirees won’t keep living longer. There’s lots of assumptions that can go wrong and make things worse – which is how it’s been for the last three decades.

Martwick’s outlandish proposal signals there’s a new level of desperation coming out of Springfield. Perhaps lawmakers sense that fiscal reality is finally bearing down on them.

These plans are unreasonable, impractical and not credible.

Illinois needs serious solutions to its crippling pension problem. And as we’ve already pointed out, 401ks going forward are key to ending the crisis, but by themselves are not enough.

Illinois has to change its constitution and work with the federal government to enact some form of bankruptcy protection. It’s the only way to both protect retirees and still allow the state to provide core services.

There is one thing that will certainly happen–ever increasing interest payments for the state. Will Illinois really ever pay-off these bonds? More likely they will just keep rolling them over (at ever higher interest rates). This is functionally a roll-over (and increase) of the last POB. This is the same dangerous path that the feds have been treading on for years: http://www.keypolicydata.com/blog-archives/2017/04/real-fiscal-cliff-2017-update-interest-payments-national-debt/

The plan is unrealistic because in the current circumstances it is unlikely that the bonds, which would not be tax exempt, could be sold at an interest rate low enough to make this worthwile. Having said that, however, I am having some difficulty understanding the outrage you all are directing against the proposal. As the Wirepoints analysis correctly states, it would merely replace one form of debt with another. Yes, if successful it may put pensioners in a relatively better position in a bankruptcy-type situation, but that would be at the expense of old and new bondholders, not taxpayers. Taxpayers… Read more »

Well, they’ve lived so long in intentional denial, of course they’re desperate.
So either BK or more horrific “creative financing” PIck one.

Last time I checked it still was not possible to borrow one’s self out of debt.

Many state constitutions have their 3% or whatever compounding indexed to CPI or rate of inflation. They can adjust their numbers from year to year. Here we have 3% compounding- period! Did anyone ever look at pension management fees. Was that ever brought up to committee. Wall street is making hundreds of millions in fees year after year regardless or returns. This comes right off the top. Taxpayers are paying those fees without any oversight. What about lifetime healthcare costs? Approx $70 Billion for that.

Fred, that 3 percent compounding cola is painful. If we could reduce that and get rid of the compounding, it would go a long way to bringing down the pension shortfall. But it wouldn’t be enough.

Yes, actually Mark Levine has been looking to do more and more with index funds…why pay all those guys the exorbitant fees. I haven’t tracked how much it has helped yet, though.

Why don’t we solve this problem by issuing a new “ILLI-COIN” a cyber currency like Bitcoin. Now you will have a cyber pension and cyber healthcare. Trade the currency up to $250 Billion then pay in full and start all over with a 401K self directed plan. Whose picture do you think would be on that coin. I think I know. Seriously we have very few options #1 cutting benefits #2 Bankruptcy. What a mess!!!

yea, exactly, or maybe the pension funds could buy there own (guaranteed by tax payer) bonds to get the 8% return!. sure ferichs could arrange- it as part of part of some social-justice investing scheme.

Fills up the pension bucket and dedicates all future revenues to the bondholders. No money left to pay legislators. Retirees move out of state so no taxes are collected from them. Presumably the money in the bucket can’t be touched in bankruptcy. The plan seems to concede that bankruptcy is inevitable and to assure that retired public servants get the bond proceeds in the form of pensions and health while the remaining citizens/taxpayers and their descendants pay off the bonds. Somewhere form is trumping substance.

I wonder where Martwick thinks he can get 8% returns with the $100 billion. Read about the retail store collapse on wolfstreet dotcom. Private equity is where the big returns are supposed to come from, but with all of these retail bankruptcies, it’s investors who lose.

Good read on the retail mess. Agree with your comments. I don’t know if you’ve taken a look at the investments in the state-run funds but they’ve got junk bonds, currencies, real estate, PE, and hedge funds. They are taking the full range of risks to get to that 8 percent return level. If they were private, I wouldn’t have much to say… But when those investments are backing guaranteed pension payouts, with a backstop from taxpayers, then it’s just bad and wrong. And corrupt.

I wonder how much pension fund $ went into the Chicago Mob real estate and PE?

I’ve looked at the PSERS portfolio for Pa. teachers. It’s 50% invested in alternatives. Max Keiser has a recent video about pensions. He points out that bonds that were issued 10 years ago just before interest rates went to zero are maturing. If investors rollover those bonds they are going to have a nasty surprise when the new bonds pay only 2% interest.

No one has mentioned that 107B is about half of what is needed to fill the pension hole using realistic as opposed to fanciful actuarial assumptions. There is a view that attempting a stunt like this may not be that bad as it will hasten an insolvency process, the only realistic way out of the whole mess. Until this occurs, thanks that we have Wirepoints.

Vote Up1Vote Down
Bob Out of Here

Digging a debt hole right next to a pension hole, what can possibly go wrong with that?

Well, at least the two debt holes will have company- and not be so lonely! In a serious vein, I was aware of the $250B figure from Moody’s – but the ALEC figure is new to me. I will chase that – one thing my overpriced North Shore high school education gave me, unlike many in Illinois, was a belief in basic math.

“Martwick’s outlandish proposal signals there’s a new level of desperation coming out of Springfield. Perhaps lawmakers sense that fiscal reality is finally bearing down on them.”

Only a thoroughly corrupt thugacrat would propose to do this on the people, the tax payers who carry the water. The mafia in Chicago must be getting worried about their govt pension they have been giving themselves.

The sponsor, Robert Martwick, is one of those Chicago Dems with a property tax appeal practice. https://www.google.com/url?sa=t&rct=j&q=&esrc=s&source=newssearch&cd=3&cad=rja&uact=8&ved=0ahUKEwizrufs3vDYAhUEuVMKHfb-ByoQqQIILigAMAI&url=https%3A%2F%2Fwww.propublica.org%2Farticle%2Fbruce-rauner-property-tax-appeals-executive-order-illinois&usg=AOvVaw2KCzaQmvlqRTOAk3EQfh5a And he’s the guy who didn’t list source of income because he said the form was hard to understand. https://chicago.suntimes.com/news/illinois-state-rep-robert-martwick-didnt-list-source-of-income-because-form-was-hard-to-understand-the-watchdogs/

And I think he has his own room at WGN radio. He’s ALWAYS on there!
Nice folks but delusional also.

It’s the old adage…. When you owe the bank $1,000 it’s your problem…. But when you owe them $1,000,000,000 it’s their problem. Yup this plan would immediately give give every current and future bond holder a problem. The taxpayer is the collateral, the collateral is walking away as we speak.