Some background: That ruling last Thursday vacated an appellate court ruling that would have provided Harvey relief from pension contribution requirements. The Illinois Comptroller, as we detailed earlier, had intercepted some of the money that flows to Harvey from the state. That money is critical for many  municipalities. A law that went into effect in 2016 allows for that money to be diverted to pensions for municipalities that fail to contribute adequately to them.

A Wirepoints Special Report found almost 400 other Illinois pension funds that potentially could trigger a similar intercept of their municipalities’ state money.

According to Moody’s: “The court’s decision demonstrates that municipal pensions are ‘must-pay’ obligations in the State of Illinois, and have greater protection against default than a city’s general obligation bonds.”

Court proceedings actually are not over. The Illinois Supreme Court’s ruling merely denied immediate relief and sent the case back to a lower court for what will be a fuller hearing on a possible injunction to halt the intercept. As reported by the Chicago Tribune, that likely won’t get underway until later this month. “Given that the issue is presently before the court and there is no past precedent as to how a judge might rule, it remains unclear what the comptroller will do if the case has not been resolved via court order or settlement by the time May 21 rolls around.” 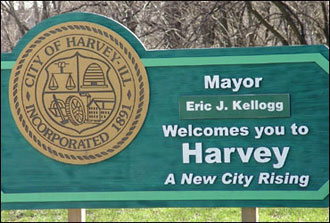 This is one skirmish in the broader, three-way battle coming between pensions, bondholders and residents. In this case, it’s a fight over bones. Harvey’s effective residential tax rate was already 5.7% even before last year’s court-ordered property tax increase specifically to fund a different city pension. Harvey’s plight is exceptionally bad, but you can count on the same three-way battle playing out in dozens of troubled municipalities across Illinois.

One place where the battle is evident is Senate Bill 370 pending in the General Assembly. An amendment recently added would limit the Comptroller’s intercept power, starting in FY2019, to one-fourth of the total amount of state funds for any municipality.

When will Legislature finally acknowledge that there simply is not now, and NEVER WILL BE sufficient money to pay the full amount of the grossly excessive Public Sector DB pensions that have been “promised”?

The longer the delay, the more CURRENT retirees UNJUSTLY take out of the small and declining pot …….. leaving less and less for the actives yet to retire.

Bingo TL. The promised benefits are far too big, and once properly accounted for, surely bankrupt the sponsoring agencies.

Why would any community think it is in their interests to keep paying each of its workers $50,000+ per year for 20-30 years AFTER THEY STOP PROVIDING SERVICES? It’s farcical on it’s face.

The old-timey union retirees and those close to retirement preach “solidarity forever.” One looks in vain for a recently hired teacher or public employee to take on the union. That employee would be ostracized and harassed for not standing up for his brothers and sisters who happen to be older and wiser. The system’s foundation is intimidation which results in substantial part from the power of the unions to shut down the government. The intimidation extends to legislators and judges — who incidentally have a major economic interest in the perpetuation of the system. It’s not a big stretch to… Read more »

Anyone who buys Illinois state or local tax-free bonds does so at their peril. It is NOT a guaranteed bond.

Indeed, the case can be made that with the IL state/local pension debacle unfolding, an Illinois government bond is a GUARANTEED long term loser investment.

And BTW, other state bondholders should be feeling smug. Similar court rulings that “pensions come first” may well put MANY “muni bond” holders in jeopardy.

What are the general expectations on whether the Legislators will or will not limit the comptroller to intercept State revenues to cities?

0
Bob Out of here
Reply to  Michael

They are damned if you do, damned if you don’t. Either the intercepts continue which will result in layoffs and service cuts, or intercepts get curtailed and the pensioners raise holy hell. The whole thing may help drive home the point to current employees they are not saving for their retirement, they are paying for current retirees.

Hasn’t become clear yet. I think they are still scratching their, um, heads over this. It will depend heavily on how many other pensions start requesting intercepts. Trustees of those nearly 400 pensions that could requests intercepts are no doubt still thinking. As fiduciaries for the pensioners, they should be wondering whether they are expected to initiate the intercepts irrespective of the consequences for current employees. Would be interested to see what their lawyers are telling them on that.

May trustee petition a court with equitable jurisdiction for instructions? Or turn the assets over to a receiver to decide how limited current assets and possible future assets should be allocated among current and future retirees? Related question: do trustees have governmental immunity (no personal liability)?

All great questions but I am going to duck them because I would rather leave them to lawyers with IL litigation experience and these are very sensitive subjects. However, I would say that, on your second question, that’s what I would be doing, or something like it, if I were a trustee on many of these pensions.

Governmental bodies cannibalizing themselves now. Moody’s can warn all they want, they should put their money where their mouth is and rate Illinois junk, instead of just talking to make themselves seem credible. But they don’t go to junk because they know the taxpayers as collateral on those bonds is indentured to the diminishment clause. Moodys operates at the pleasure of government borrowing. All parties here will look to the taxpayers for the next loan on this ponzi scam.

This will be the mother of all jackpots for lawyers as the mess unfolds.

And The Residents get screwed the most. Democrats prefer the Scorched Earth Policy whereby everyone loses, and residents and taxpayers the most.

brilliant, and who’s best situated to litigate this mess– non other than the law firms of madigan, cullerton, burk and the gang. they can transition out of the prop tax hustle into tax intercept game.

the intercepts will just end in endless legal battles and make dem pols look bad taxing poor folks out of there homes. the only temporary solution is for the (bankrupt) state to step in and take over the payments (ie the civic fed plan). and once the state take over one municipal pension it’s going to have to do it for them all (just like cps got there bailout). then the house of cards gotsa come crashen down

Has anybody asked the pension funds how they feel about that? Didn’t think so.