Yesterday, Bloomberg ran a syndicated story under its headline, “New Jersey Tops Illinois as State With Worst-Off Pension System.” The story covers what you would expect — how horrible the problem is for both states, how it’s crowding out other spending, causing credit downgrades and so on. 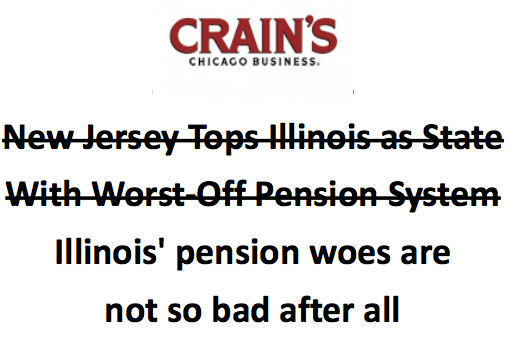 But Crain’s published that Bloomberg story under this headline: “Illinois’ pension woes are not so bad after all.” No, the story said no such thing!

As we’ve said from the start on this site, when the books are written about Illinois’ collapse, whole chapters will be devoted to media incompetence. Denial and ignorance are the hallmarks of how the Illinois press covers our state and local fiscal crises. Though most Illinoisans now realize we have a serious problem, they don’t know the full scope of it and our media bear much of the blame. They were asleep at the switch for years and most still are.

Crain’s is among the worst. The problem derives mostly from political reporters trying to cover fiscal matters. They just don’t know what they are talking about. Many are politically biased and happy to spin the story the way the deniers want, which is that our problems are nothing a tax increase couldn’t solve. In this case, it was apparently some editor who knows full well that many readers never get past the headline.

I voted with my feet 19 years ago. My property taxes in CO are 1/3 what they would be in IL. The racket is state and local pols including school boards, public sector unions and various actuaries will go down with the ship in IL. Glad I don’t have to pay for the racket!!!

The only good thing that may come out of having many more states move into miserable pension underfunding territory is that it increases the likelihood of a future bailout of some kind by the Federal government. That could be a win for pension recipients like myself and Illinois taxpayers and bondholders at the same time, and if y’all could just slightly tone down your animosity towards state workers and retirees then perhaps we could work together towards a solution that moves Illinois forward. A New Jersey state senator has proposed just such a scheme – that the Feds borrow large… Read more »

I agree that the Feds will have no choice but to get involved at some point. But a federal bailout as you suggest is not fair. What about social security? Instead of raising the social security age thresholds or tax rates, why not keep SSI as-is and simply “bail it out”? And what about states with no Constitutional pension protection? Will they get reduced benefits even though their states were as negligent as Illinois in pension funding? Then you have proposed private sector bailouts for Central States and coal miner pension funds, even though there were rules in place (PBGC)… Read more »

The PBGC and FDIC both have $ caps on bailouts. To broaden the base of abused taxpayers from city to state to nation and to include Teamsters (etc.) would eliminate all principles of prudent risk management from our system. Moving it to the federal level does put the mess into the hands of a sovereign with the power to print money and some may see that as an advantage. But the underlying notion of protecting everyone from individual or collective foolishness could apply equally to college debt, consumer debt, mortgage debt on underwater properties, etc. There is scriptural authority for… Read more »

It’s hard to see how that could get through Congress, especially the Senate. The majority of states that are in comparatively good shape would have no reason to tax everybody to help the minority that are in relatively bad shape. If, instead, the bailout were done proportionately so that all states were treated equally regardless of how bad their pensions are, you wouldn’t really be accomplishing anything.

I just removed the University of Richmond from the list of schools that my senior in high school should apply to – I would never want you influencing her opinions on government and public obligations. I’ve read your posts to this website and others – it’s comical. The abuses that are occurring by those in charge at the state and local level (i.e., exorbitant raises, vacation buyouts, etc. that juice pensions), the pension millionaires who pay in a fraction of what they receive over their lifetime (including an assumption on compounding of returns), and the policies being dictated by those… Read more »

Illinois: Not as Bad as New Jersey….

I feel Greg Hinz is the worst. He is just a complete, biased dope when it comes to the pensions. Any time I ask him how much of a tax increase he thinks we need, he cannot answer. I do think he is biased, but I also think he is pension dumb as well. Your thoughts?

The person (people?) at Crain’s who changed the headline is incompetent or has an agenda.

Crain’s made a conscientious effort to change an accurate headline to a deceptive headline.

The person (people?) at Crain’s who changed the headline has an agenda.

If one was incompetent, they would simply leave the headline as written by Bloomberg.

December 2, 2020
Ted was on with Brian Costin of Americans for Prosperity discussing the general election and what it means for Illinois' worsening financial crisis.
View Comments | Add Comment

December 2, 2020
Our answer never seems very satisfying so now we are putting it on you. Have at it.
View Comments (87) | Add Comment

December 1, 2020
Priority No. 1 couldn’t be more clear. Pensions are Illinois’ biggest problem and they cannot be fixed without an amendment to the state constitution. Proceed now.
View Comments (70) | Add Comment