There’s nothing in the U.S. Census migration data to tell us what exactly Illinois’ neighbors have done to improve their migration demographics. But whatever it is, their numbers have become better over time, especially compared to Illinois.

In 2005, Indiana lost a net 27,000 people to domestic out-migration, according to the U.S. Census Bureau’s American Community Survey.* Today, that state has more people coming in and fewer people leaving. The net result is a positive 10,000 in net in-migration.

The same goes for Michigan and Missouri. They now gain people from domestic migration instead of losing them.

Those states’ experiences begs the question. Are reforms to collective bargaining laws, lower taxes, and improved business climates the secret to keeping residents and attracting new ones? That’s been the experience of Illinois’ neighbors. Meanwhile, out-migration from Illinois has only accelerated. 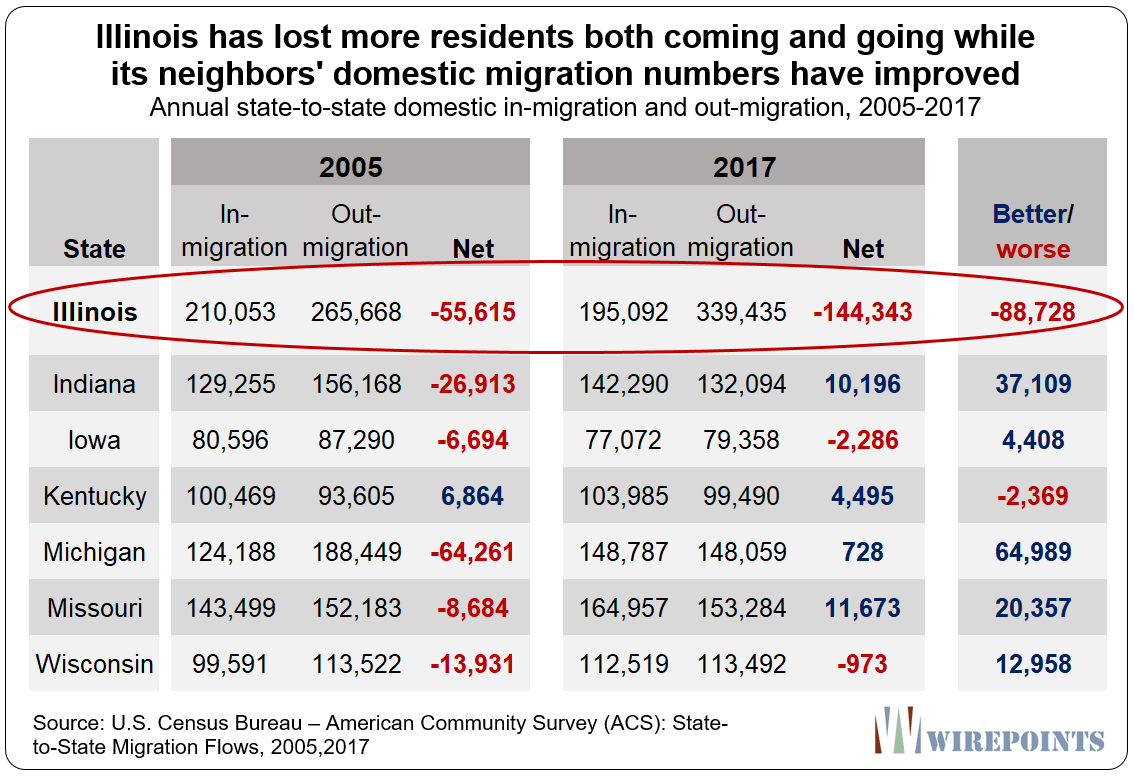 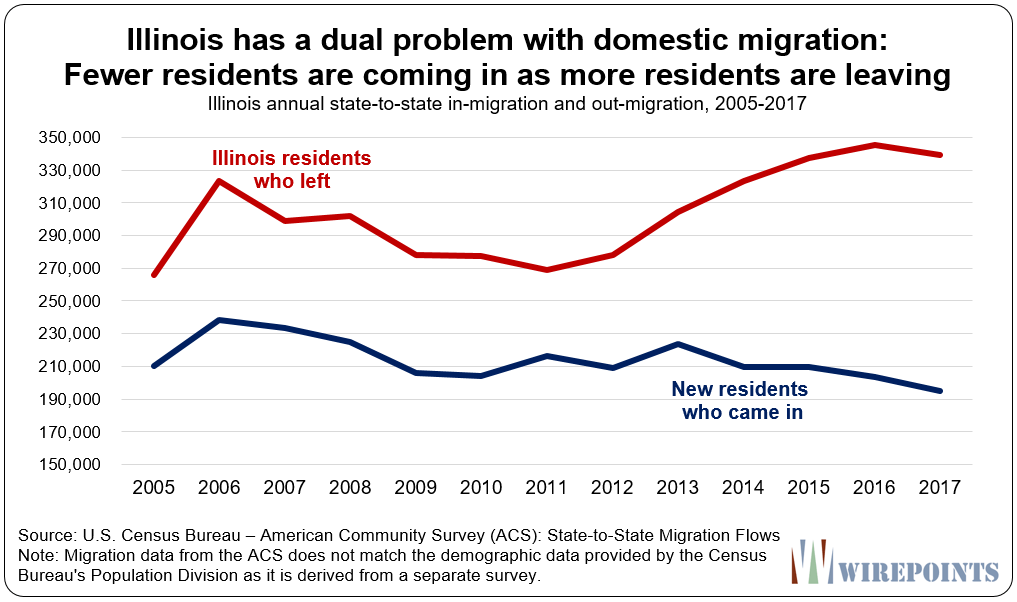 Meanwhile, Michigan has seen big positive changes. It lost over 64,000 net people a year to out-migration in 2005. Since then, the annual number of residents leaving the Wolverine state has fallen and more people have started moving in. In 2017, Michigan basically broke even on domestic migration.

Kentucky was the only neighbor to experience a negative change over the period. Instead of gaining nearly 7,000 people a year to migration, it now only gains 4,500. Its domestic migration numbers have basically stagnated, though they are still positive.

That’s a far cry from the out-migration problems in Illinois. Losing a few hundred people every year is nothing compared to losing 144,000 a year.

That net loss is a clear indicator of how uncompetitive Illinois has become. Other states in the Rust Belt are experiencing the same difficult economic changes, but Illinois is the only one among its neighbors to suffer from a massive out-migration problem.

The ACS dataset is derived from individual citizen surveys while the Population Division’s demographic dataset is derived from state and federal administrative data. Due to their different sources, the surveys’ annual domestic migration numbers can differ significantly from each other and should not be directly compared. For example, The ACS data says Illinois’ net out-migration equaled 144,000 residents in 2017 while the demographic data says 114,000 net residents left.

The two surveys should be used to confirm the broad trend of net in- or out-migration in a state over time. Wirepoints relies primarily on the demographic data because it also measures states’ total annual population change while the ACS state-to-state survey data does not.

Can’t wait to leave Illinois. Only one more week to go. My appreciation to those of you who will pick up my portion of the state’s debt ($100,000.00 more or less). Suckers ! Just kidding….sort of.