“Illinois’ Budget Impasse Leads to ‘Out of Control’ Interest Payments.”

That WTTW headline and similar story lines were common Tuesday after release of a report by Illinois Comptroller Susana Mendoza on late fees paid by Illinois on its backlog of unpaid bills — 1.4 billion just in the last two-and-one-half years. Her report and the accompanying press release say basically just that:  “The fact that, under Governor Rauner, the state allowed its bill backlog to grow to a point where we incurred nearly two decades worth of late payment interest penalties in just over two years is asinine,” Mendoza said.

It’s bunk. Baloney. Nonsense. It didn’t matter whether a budget was in place.

During the impasse, tax revenue came in and bills were incurred just as they did when there was a budget. Bills went unpaid because we were spending more than we were taking in. It’s that simple. We spent everything we had and more, just as we did before the impasse, and just as we are doing today. The backlog was as high as $9 billion in January 2013, long before the impasse started.

But didn’t the backlog drop dramatically after the budget was passed last July — from $16.7 billion to about $8 billion today? Yes, but that’s because we moved bills to a different credit card. Through a bond sale shortly after the budget was passed (and some resulting reimbursements from the federal government) the state raised $8.8 billion, which was applied entirely against the unpaid bills. There is nothing to show for any budget impact on the backlog. 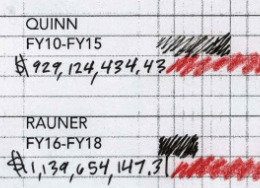 Also, Mendoza’s own numbers don’t really support her blame-Rauner theme. On the right is a graphic from her report, which she didn’t discuss. It shows that late penalties in the Quinn years weren’t that much lower than during Rauner’s term. Remember that Democrats had super majorities in both houses of the General Assembly during those Quinn years.

Susana Mendoza is charismatic, articulate and a bundle of energy. She’s also a superb spin artist, as this chapter shows. Much of the press, like WTTW as shown in that headline, bought the spin.

It’s part of a theme clearly central to Illinois Democrats this election: Most of our problems were caused by the budget impasse, and Governor Rauner is entirely to blame for the impasse.

The second part of that theme is just as silly. The Democrat controlled General Assembly obviously shares blame. Ominously, it looks like they’re prepared to double down by ensuring another impasse. They’ve made no semblance of a counter offer to the budget Rauner proposed, but they’ll no doubt be blaming an impasse on Rauner.

They’ll probably get away with it. In the meantime, the real problem, which is deficit spending, goes ignored.

-Mark Glennon is founder and Executive Editor of Wirepoints.

I think the 18 year graph is incriminating unto itself. It shows our lowest late fees were incurred at our lowest state income tax rate of 3%.About 80% of the 1998-2015 pie chart is 2011-15, a period in which 4 of those 5 years had a state income tax rate of 5%. And it looks like over that 18 year period, 30% was in 2013 alone. By then, we were 2 years into the tax hike that was supposed to pay down bills. What’s the deal? I bet you could overlay those charts with the Edgar Ramp payment plan and… Read more »

I agree that the biggest issue is the deficit spending. I also agree that Dems have full ownership of that problem during Quinn. I don’t agree that the number are equivalent or that “late penalties in the Quinn years weren’t that much lower than during Rauner’s term.” Rauners late fees in his first 2 years are 33% higher than Quinn’s over 5 years.

Keep in mind that the temporary tax increase was in place from 2010 to 1/1/15 producing $5M per year in revenue that ended over the course of the first part of 2016. Both Dems and Rauner didn’t try to extend it.

This fiasco should be called “Revengers, the Age of ULTRON (unfunded liabilities, the reality of the numbers). The revenger is the numbers that can’t be tweaked or cooked anymore, although Mendoza and her cohorts must be trying like crazy to move numbers around on Excel spreadsheets to make them look better.

“The Democrat controlled General Assembly obviously shares blame. Ominously, it looks like they’re prepared to double down by ensuring another impasse. They’ve made no semblance of a counter offer to the budget Rauner proposed, but they’ll no doubt be blaming an impasse on Rauner.” This is because they know the voters of Illinois are too stupid to figure out the truth. This is why Pritzker is guaranteed to win the governorship. If I didn’t have a business here I would be fascinated watching the super majority democrats and governor trip over themselves in their anti-business legislative attempts to show the… Read more »

I don’t live in Illinois, but have deep family roots in the State. I remain friends with many in the State, including many who have fled the South suburbs. I don’t want to be insensitive. But I welcome the likely election of Pritzker, because his election will significantly accelerate the capital and people and business exodus from Illinois. And the faster Illinois gets to financial Armageddon the better shot of a recovery of some kind. I recognize that this will cause real pain for some, but the problems are as systemic as those we saw in the mortgage backed securities… Read more »

This 1% per month fees dates back to the early 80’s when the prime rate was 18%. This law was never adjusted to to reflect ongoing or current interest rates. The rate today should be approx 4%/yr not 12% after a 90 day waiting period. This would have saved taxpayers at least a billion. But what’s a billion among friends. I have been lobbying my local reps here in Rockford for many years now but it never gets acted on or sees the light of day in Springfield. Pushed aside like many good pieces of legislation like term limits -pension… Read more »

You are 100% right. As you know, the businesses aren’t actually waiting for anything. They get paid by an intermediary, who is essentially a bondholder, but making 12% from the state.

The smart money knows where to graft, and this is where it is. There are too many legislators making money off this, as you say, and it will never change until it collapses.

May 24, 2020
The Illinois General Assembly has finally passed an emergency budget for 2021  Tax revenues have taken a severe hit due to the impact of the shutdown in response to COVID-19, yet that hasn’t stopped lawmakers’ spending priorities. The state will spend a record $42.9 billion while bringing in just $36.8 billion.
View Comments (18) | Add Comment