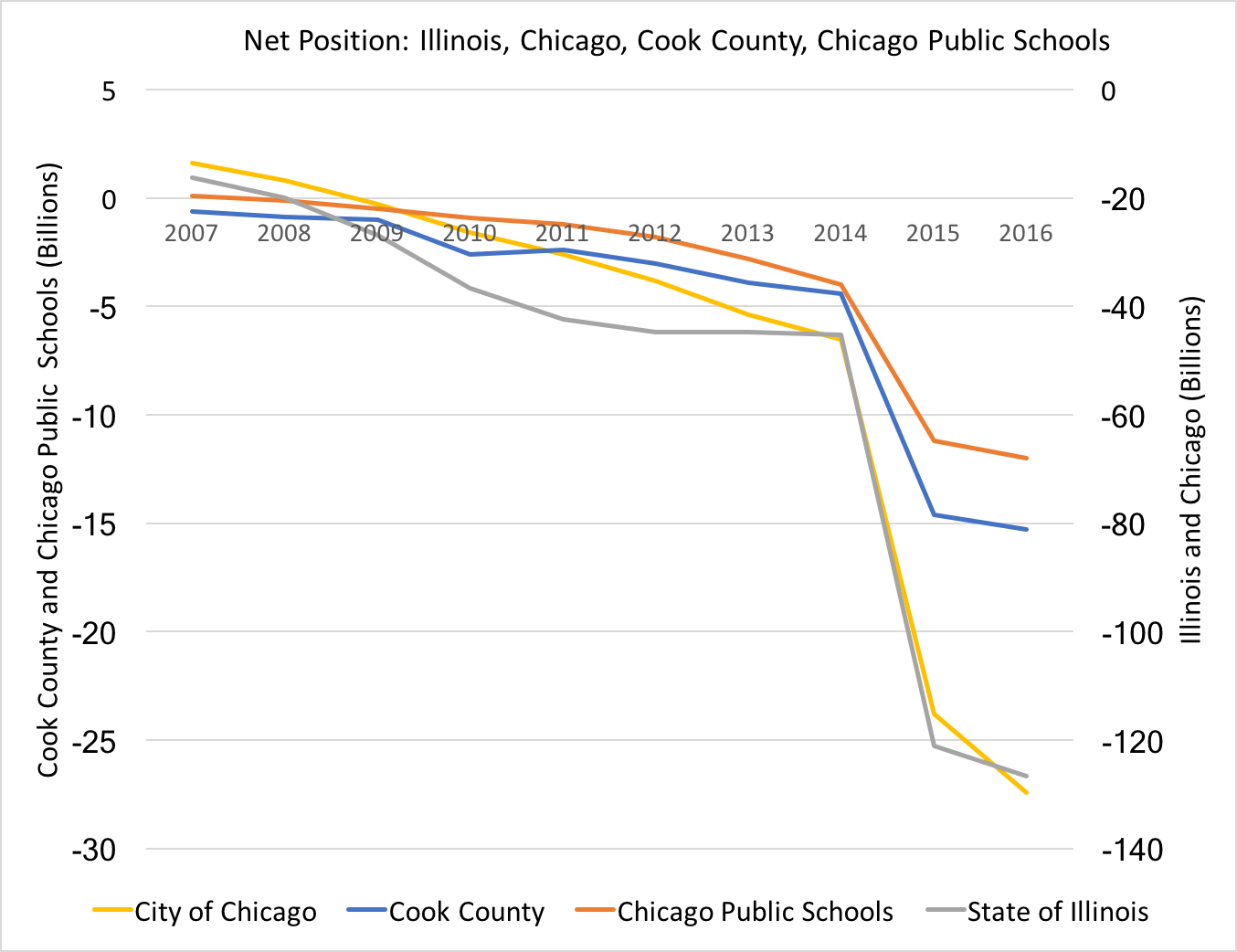 “Net position” is the government accounting term used for a balance sheet snapshot.

The chart shows net positions, in billions, for each of the last ten year ends, taken from the most recent CAFR, the Comprehensive Annual Financial Report, for Illinois, the City of Chicago (which are plotted on the right axis) and for Chicago’s two largest overlapping units of government, Cook County and the Chicago Public School District (which are plotted on the left).

However, that doesn’t mean those losses should be disregarded. New assumptions and standards represent an admission that prior ones weren’t fairly presenting financial condition. Had the new standards been in place earlier, the losses would only have been pushed back into earlier years.

Aside from the terrifying trend, the chart also exposes the silliness of “balanced budget” claims. All these units of government, to my knowledge, operated under budgets they claimed were balanced in each of these years (except the State of Illinois for 2016, during which it had no budget).

I asked Bill Bergman of Truth in Accounting for his reaction to the chart:

It’s fun, or sad and scary, or all of the above, to consider what this means for a citizen of the City of Chicago.  That person is not only a citizen of the City of Chicago, but is also impacted by the financials of the Chicago Public Schools, Cook County, and the State of Illinois.   Adding things up, back in 2007, he was being told that things were basically flat.  The latest aggregate net position came to over $250 billion — negative.  That’s a lot of dough.

Importantly, he added, “The accounting changes aren’t over.  We have yet to recognize retiree health care and other retirement benefits on the balance sheet, for example. We have a lot of ditch-digging ahead of us.”

Here’s a promise: The trend will continue. Recent tax increases will have little impact. Only drastic policy reversals, which aren’t in the cards with this General Assembly, would turn this around.

We’re in free fall and the general public is completely ignorant of the magnitude of the problem. My little hometown rag, “The Pantagraph”, breathlessly reported yesterday that Rauner opposes SB1 because he’s against more funding for poor Chicago schools (typical AP story….repubs bad, dems good). Step up Bruce! Scream it from the rooftops! Educate and inform the electorate. What do you have to lose???

I love this comment! I feel precisely the same way!

I love that comment, too. Illinois remains the State of Denial. Calling it like it is, ugly as it is, has been our central mission on this site. Hopefully, Rauner’s new communications team will do the same.

I apologize, I cannot figure out where to properly message you regarding the Politifact/BGA story; I read your comments on BGA. Have you contacted anyone, personally, from BGA or with Politifact about these serious omissions? It is absolutely infuriating.

Waste of time. Last time I contacted them about a clear error in a story about pensions they ignored it. I did write an earlier story myself about the bill and I will again. The earlier story is linked here. https://wirepoints.org/the-education-funding-bill-is-a-monstrosity-of-unknown-proportions-wirepoints-original/ The school funding bill is exceptionally complex and the the BGA clearly did not fully cover the whole story and chose, instead, to spin it against Rauner, which that particular author has a history of doing.

I have previously read what you published, and I thank you. I puruse your site daily and I appreciate having found it. I became interested in school funding issues in 2011, as my property taxes kept climbing (D128). I have become fascinated by the level of corruption and collusion in Illinois finances (I am a transplant). It seems to me, the media, due to time constraints or with intent, do a poor job reporting these battles in Springield and what they mean in the short and long term for taxpayers. More importantly, I believe Rauner has done a poor job… Read more »

Thank you. Hopefully, Rauner’s new communications people will fix what was horrible there. As for the press, they are a key part of our problem, now on full display with the school funding battle. Contradictions abound and many things are unanswered, but that doesn’t stop them from spewing.

So how does this end? 1. No change, keep raising taxes, death spiral, societal breakdown, riots. 2. No change, get bailed out by Federal Govt. to the chagrin of states like Texas, Florida, ect. 3. Dramatic pro growth changes like tax freezes, reductions in govt. spending, change pensions to 401ks, right to work state legislation (essentially a Red State). 4. Federal Government to approve BK for States to avoid death spiral and societal breakdown, get a fresh start. 5. Pass Illinois Constitutional Convention shifting burden to munis which can declare BK, get a fresh start. 6. No Change, some munis… Read more »

Riots are not a true option, so forget anything that involves that. Police powers could be used if anything close to riots were brewing. The pensions will collapse, and then they will be lowered, period.

Riots are not a true option. If anything even gets close to that, then police powers would have to be used to lower the pensions for the greater good. The pensions are toast one way or another. Math and reality will win. Reality says riots will not be allowed to happen over pensions. The pensions will have to be lowered when they collapse.

May 24, 2020
The Illinois General Assembly has finally passed an emergency budget for 2021  Tax revenues have taken a severe hit due to the impact of the shutdown in response to COVID-19, yet that hasn’t stopped lawmakers’ spending priorities. The state will spend a record $42.9 billion while bringing in just $36.8 billion.
View Comments (8) | Add Comment