“Did you look at your water bill yet?” A reader in Lake Forest, Illinois told us he got a call from his neighbor asking that, and sent along his bill, an excerpt from which is below. It turns out plenty of homeowners in Lake Forest were angered to see a new charge for police and fire pensions on their water/sewer/refuse bills, according to a resident we talked to. 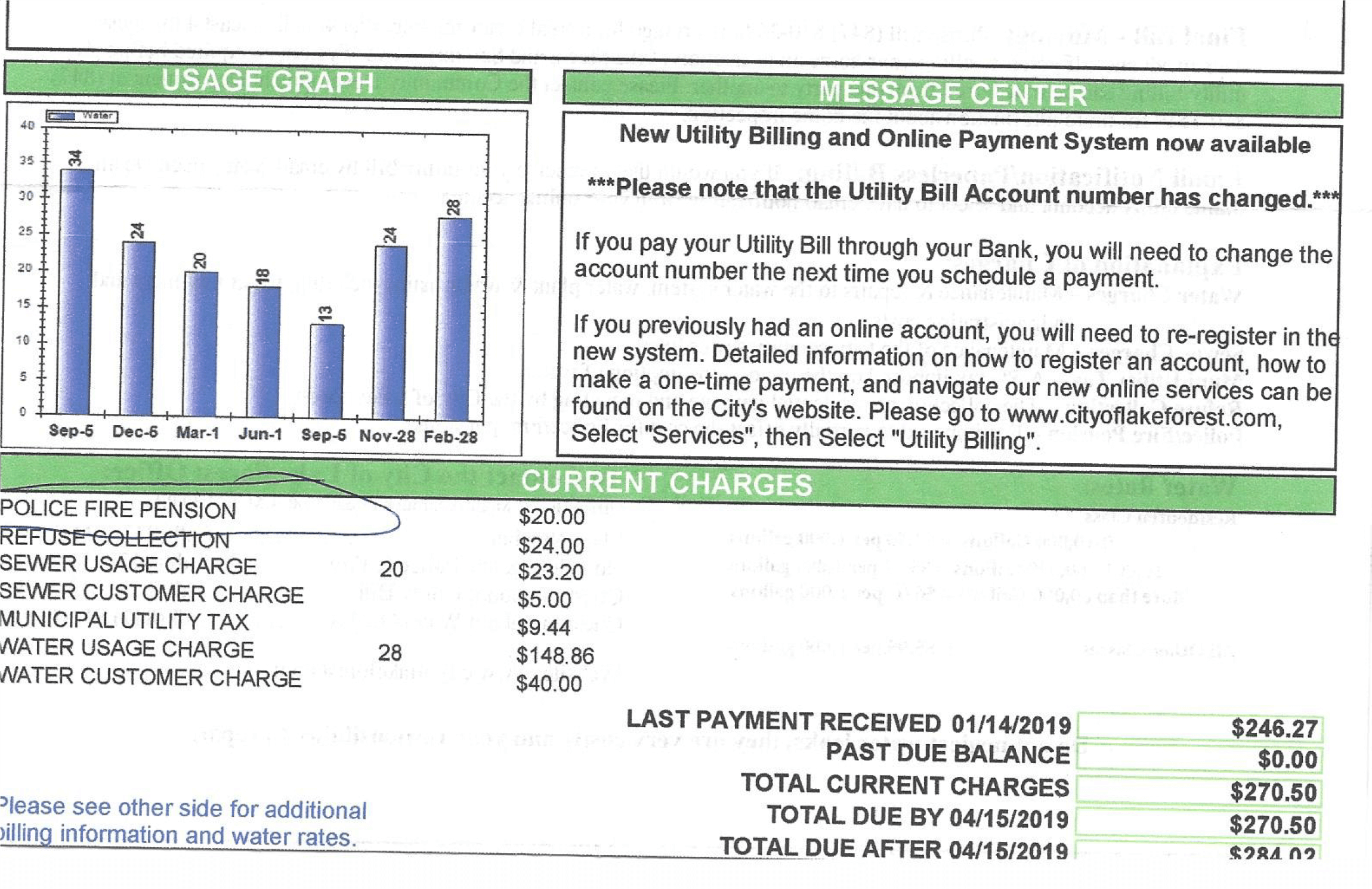 It’s certainly not that $20 will break the budget for folks in Lake Forest, which is among Illinois’ richest communities. It’s partly the lack of reporting and transparency on the new charge and the process behind its assessment that has them upset. So far, we’ve been unable to find anything in the public record on it. Rather than go through the procedures for adding more to its property tax bills, Lake Forest apparently just added a pension charge to utility bills.

The only thing comparable we’ve seen in Illinois is a “public safety pension fee” Danville added to its sewer and garbage collection fees, though they did so very openly.

Lake Forest’s police and firefighter pensions are 54% and 72% funded, respectively, according to the most recent state data (from 2016). Their combined unfunded liability is about $37 million.

Lake Forest’s approach raises other questions beyond the process by which it was implemented. It apparently will amount to a flat $80 per year. Is that per water meter, per property or what? What about apartment and condominiums? Commercial properties?

Lake Forest is the kind of place where plenty of residents already have second or third homes in other states. It’s no accident to see many Florida license plates there in the summer. Many have already changed residences and moved their registrations.

It’s not about $20 per quarter or even the process behind it. It’s about a signal — another signal to residents that “they’re coming for your money,” as Warren Buffett recently said about Illinois and other states with severe pension crises.

UPDATE: As indicated in comments below and from another note on Facebook, it appears this charge has been in place for at least a couple years, starting at a lesser amount.

Gentlemen- In my last post, I made mention of the Lake Forest Pension Subcommittee, of which I am a member. For the benefit of our residents, the committee recently composed a deep dive explanation of our public pensions to help our residents better understand the world of public employee pensions that are funded by the taxes paid by Lake Forest residents and how we plan our future through a very long lens of a decade or more. We then released the piece through all available communications channels, including the media, which picked it up as the Patch story below. I… Read more »

Gentlemen- I am an Alderman for the city of Lake Forest as well as a member of the pension sub-committee. I find your article dated 3/25/19 (https://wirepoints.org/pension-charge-added-to-lake-forest-utility-bills-quicktake/ ) to be wildly inaccurate and sensationalist. If you were unable to find anything in the public record on this, I must say you didn’t look very hard. The information you failed to find is easily accessible at http://www.cityoflakeforest.com. The genesis of the public safety pension fee in fact goes back to 2016 and was vetted at no less than 7 different council and committee meetings, all open to the public. For your… Read more »

Tim – Any reason why the city would double this fee in one year? Looks like the city was discussing doubling the fee just six months after the initial rollout.

If you read through all my comments, mainly the second one, we changed the way we fund our public safety pensions to smooth the payments now and well into the future. That resulted in higher current payments such that the $10 fee was inadequate.

Ready to move to Indiana yet?

Wiscy and Michigan both have socialist governors too, Indiana is the safest bet, followed by Iowa and Missouri.

The Blue Locust are moving to all surrounding states, so even the reddest Red State is not safe forever.

I’m looking at Tennessee or Florida after a stint overseas. If you want a shock, go online and compare TN real estate taxes to IL.

1
bob out of here
Reply to  DantheMan

Part of that is due to the fact schools are funded at the state level in Tennessee, rather than at the local level via property taxes. Sales tax is close to Chicago levels, and food is taxed at 7.X% depending on which county you live in. The grass is greener, but not as green as it first appears.

Interesting that the garbage fee is less than half of what we pay a few towns south of LF.

1) The public safety pension fee has been in place since May 2017 and started out $10 per quarter for residential accounts and $35 per quarter for all other accounts: https://www.cityoflakeforest.com/assets/1/7/Lake_Forest_Utility_Bill_Changes_Effective_May_1.pdf

It might have been earlier than indicated because this report doesn’t have the amount shaded. It would be interesting to see how the doubling of this fee was communicated. A bit concerning to double a fee after only one year.

Thanks. Updated the article to reflect that.

No worries. In re-reading my post, I came off blunt, which wasn’t my intent. I’m genuinely interested in the communication (or lack thereof) implementing then doubling the rate. I think I think it sheds light on the life cycle of new fees. Maybe it speaks to the hubris of city officials in doubling them.

Blunt is fine. My sources there obviously had it partially wrong (though I did accurately write what they told me).

Very sneaky of Lake Forest. When real estate shopping, almost everyone asks about real estate taxes, not so much utility bills. I guess that will change as shoppers eventually wise up to the new tax tricks. Eventually, Zillow might start to show these “unusual taxes”. You can only hide the truth for so long.

How many reasons do IL residents need to move out of state? This one should make even some of the die-hard residents move.

1
DantheMan
Reply to  world with end

Illinois residents favorite movie quote…. “Thankyou sir. May I have another?”

May 29, 2020
"You've got one million Illinoisans unemployed, nobody knows what's happening with the economy, we're only now starting to open up. And yet the government passed a record spending budget – the biggest ever – with no cuts, no furloughs, no kind of savings whatsoever to give relief to Illinoisans that have to pay for that government."
View Comments (7) | Add Comment