I was recently invited to speak on a panel in Schaumburg on the topic of pensions. Skyrocketing pension costs are pushing property taxes higher and higher and suburban residents want to know what’s driving those increases. My handout is attached here.

The answer, in large part, is that government worker salaries and benefits have become increasingly unaffordable for the residents that pay for them. For example:

To be clear, workers who receive these benefits have done nothing wrong. They’ve benefited from favorable labor laws and lucrative contracts bargained for by their unions. If anyone is at fault, it’s the government officials who made promises they can’t keep and doled out benefits that taxpayers can’t afford.

Those benefits are driving up property taxes for suburban homeowners to some of the highest levels in both the state and in the nation. 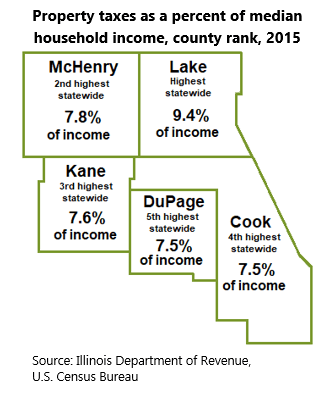 The Schaumburg area contributes to the overall 7,000 local governments in Illinois – the most in the nation.

Those local governments, from the school district to the village itself, have a large number of administrators and staff that earn significant compensation. Nearly 80 percent of full-time Schaumburg workers receive more than $100,000 in total annual compensation, according to the village’s compensation database. 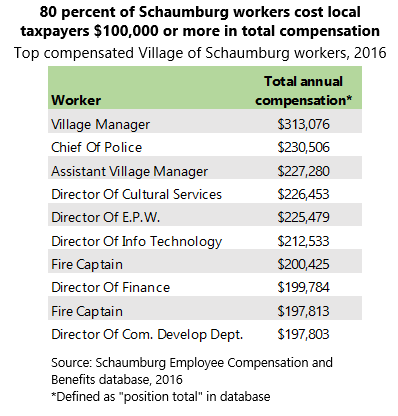 The six-figure annual compensation that many administrators and workers receive not only increase annual expenses for local governments, but directly contribute to the growing costs of pensions.

High salaries, coupled with generous pension rules, have boosted the retirement costs for local communities, in many cases far beyond what taxpayers can afford.

For example, Mohsin Dada is a former assistant superintendent of Schaumburg CCSD 54 who retired in 2011 at the age of 59. According to FOIA data received from TRS, he received a starting annual pension of $237,000 that year and can expect approximately $6.8 million in total benefits over the course of his retirement. Much of that is thanks to the compounded COLA that will increase his pension benefit by 3 percent each year going forward. 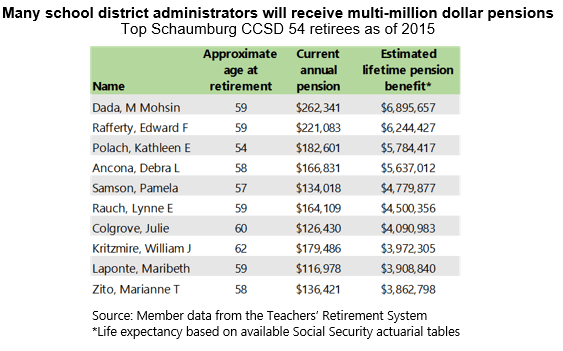 And in this case, Dada’s cost to taxpayers doesn’t end with just his teacher pension. According to the Chicago Tribune: “Dada is now a chief financial officer in North Shore School District 112, earning more than $200,000 and contributing to another, non-educator pension system.”

But it’s not just the top administrators of CCSD 54 who will receive millions in pension benefits.

The average recently retired career Schaumburg teacher, retired in 2013 or later with 30 years or more of service, received a starting pension of $88,000 and will get more than $2.8 million over the course of his or her retirement.

In contrast, the average Social Security benefit for retirees in Schaumburg is less than $19,000 annually. And the maximum benefit a retiree at full retirement age can receive nationally totals just $32,200.

The retirement security of Schaumburg’s police and firefighters is increasingly at risk: the funded ratio for their pensions is hovering at around just 65 percent. That’s despite the fact that local taxpayers have poured more and more money into an increasingly indebted system. 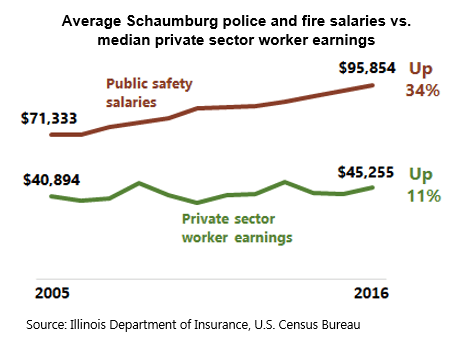 And with there now being more pension beneficiaries than active police and fire workers – there are now 10 pensioners for every 9 actives – the costs to taxpayers will only go up.

The property tax crisis in Schaumburg and nearby suburbs will continue to worsen until cities get their costs under control.

To help make that happen, the state must pass collective bargaining reforms that give local governments the power to negotiate better contracts for their taxpayers. It also means getting pension costs under control by having cities move away from pensions and towards 401(k)-style plans.

But while the above solutions will help manage ongoing costs for stable cities like Schaumburg, they’ll do nothing to reduce municipalities’ massive local pension debts. And it’s that debt that’s sinking many Illinois communities.

But the only effective long-term solution for cities struggling under an impossible load of pension debt is municipal bankruptcy. For many cities, reducing debts and reorganizing liabilities under federal bankruptcy is the best way to make themselves viable for residents again. For cities like Harvey or East St. Louis, it’s the only option. Illinois’ state legislature must authorize municipal bankruptcy for those cities so their residents can get the relief they need.

Without these reforms, expect Illinois’ dysfunction to only worsen.

We need radical change. This has to stop and be repealed. These individuals care nothing for the tax payer. Needed are new responsible politicians. Like Jeanne Ives

What were the proposed solutions at the Schaumburg Township Republican breakfast panel by the IEA and TRS?

And their alleged reasons for the current predicament?

Mike, what was amazing is that the union-based panelists admitted that benefits have been too rich for too long. There was uniform agreement on that. However, tax hikes continue to be the primary solution for them.

More broadly, the reforms discussed there included changing the pension protection clause in the constitution, shifting pension costs to local governments, and the use of bankruptcy protection as a means for cities and the state to reorganize their debts and get their obligations under control.

How does this happen? Don’t “Elected Officials” want to cut their own pay/pensions and reduce the budgets of their little empires. Let me guess, Democrats/Unions/Mafia/Thugs control most of local governments in Cook County.

Ted, I wish my town’s police and fire plans were as well funded as Schaumburg’s. Our police and fire plans are funded at 44% in the aggregate and for every two active workers we have three persons collecting benefits. But somehow the severity of the situation is lost on some local elected officials. One in particular, who works in the financial services field and holds an Ivy League degree, has a two-stage litmus test that goes like this: 1) Have we contributed everything the pension boards have requested? 2) Have we ever failed to mail out the pension checks? If… Read more »