Gov. J.B. Pritzker wants you to think Illinois doesn’t tax or spend enough. “A fair tax system will allow us to eliminate the structural deficit that has plagued our state for nearly two decades,” the governor said in his first budget address.

But there’s plenty of data which shows Illinoisans are far from undertaxed. On the contrary, residents face one of the highest combined state/local tax burdens in the country. High taxes is one of the reasons why Illinois is losing more people than every other state in the country, bar New York.

Yet the low-tax myth is consistently repeated by proponents of the progressive tax, especially Ralph Martire, head of the union-backed CTBA. Illinois is a “relatively low tax” state he says, with “one of the 10 lowest combined state and local tax burdens.”

That claim is contradicted by analyses from a Chicago Fed economist to the Tax Foundation to personal-finance firm WalletHub. All show Illinois to be a high tax state once all state and local taxes are added up.

Start with the recent study by the Federal Reserve Bank of Chicago economist Leslie McGranahan. She tracked revenues and expenses for the 50 states since 1960 and found that Illinois had “a relatively larger role of local governments in total state and local finances (and a) higher retiree compensation compared with current worker compensation among its government employees.”

According to her analysis, Illinois has consistently ranked near the top of all states for state and local tax revenues per capita – tracking closely with the 80th percentile (the country’s top 10 states). Illinoisans have been paying more in total taxes than residents in most other states for decades. 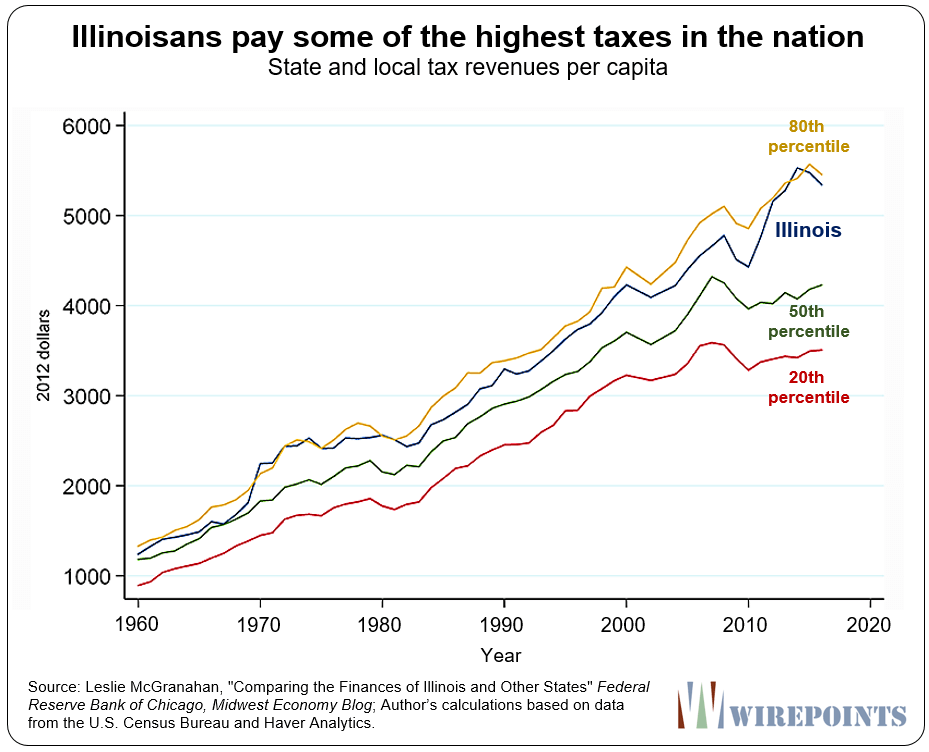 McGranahan also found that “Illinois has relatively high local property taxes” – which matches recent data from the nonpartisan Tax Foundation. The foundation said Illinoisans paid the 2nd-highest effective property taxes in the nation in 2017, double the rates that residents in neighboring Missouri, Indiana and Kentucky pay.

Those high property taxes contribute significantly to Illinoisans’ overall state/local tax burden. The Tax Foundation found Illinois had the 5th-highest combined tax burden in 2012, which serves as a good proxy for 2019 due to the similar income tax rate in place back then (5 percent in 2012 vs. 4.95 percent in 2019).

According to their report, Illinois has the 1st, 3rd or 9th-highest state and local taxes in the nation, depending on the methodology used. 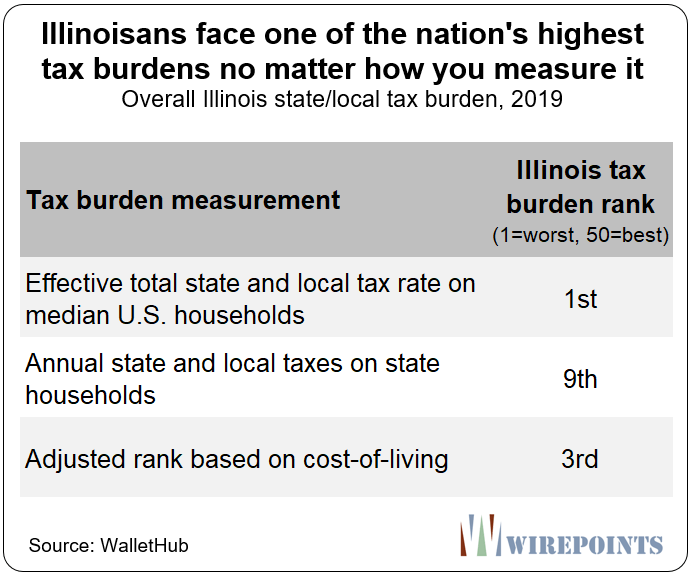 Illinois has already lost a net 1.5 million residents to domestic out-migration since 2000. Telling those who remain that they don’t pay enough in taxes – especially when they already pay some of the highest rates in the country – is a sure way to drive even more people out of Illinois. It doesn’t matter if they are rich or poor.

Losing more people will turbocharge the negative spiral Illinois is in. Already, fewer residents has resulted in a bigger burden on those who remain, lower home values and a worsening business climate. The progressive tax is no solution. It will only make things worse.

Cannot move life resident. However we are so close to Indiana we shop,buy gas,use,internet when possible. We tried it the other way. the politicians just keep on raising taxes. As a downstate resident enough is enough. School teachers in Chicago area retire at twice or more than we do. we cannot help what the cost of living there is. We are expected to pay the same taxes with no where near the income.

The Democrat party is trying to erase you and deny your existence. Downstate lives don’t matter.

Actually you could move. You just choose not too.
The alternative is watch your home become worthless in Illinois & enjoy having your family’s wealth wiped out.

6
Bob out of here
Reply to  Indy

The loss of hime value is one of the most pernicious effects of rising tax burdens. Your home is never going to be worth more than it is now w/o tax reform. Who’d want to buy it?

Indy is right Joe, you can move assuming you’re not on your deathbed. If you think things are bad now, …… . Some would argue that the moral thing to do is move. By not even considering leaving the state, your tax dollars will always be there to support the progressive/socialist agenda. Do you believe in open borders, sanctuary cities, forced taxpayer funded abortion, that white males are all racist, ……………….?

BUT ILLINOIS IS A LOW TAX STATE, RIGHT?

Illinois actually IS a low tax state – in terms of its debt and spending. If taxes were increased enough to balance the budget and start paying down the State’s bills and debts, even Democrats would be weeping and ready to revolt.

Illinois is a high-tax state
By John Klingner

Researchers at Wallethub compared state and local tax rates in the 50 states and the District of Columbia against national medians to find out which state gives taxpayers a bigger break. Despite having no vehicle tax, Illinois still ranked at the bottom of the list with the highest state and local taxes in the country. In fact, the Illinois tax rate is 38.51 percent higher than the national average of 10.76 percent.

meanwhile Zorn says it’s all a lie, we are not a high tax state, according to Illinois itself through it’s “Commission on Government Forecasting and Accountability”…. uh huh, the commission is led by State Senator Heather Steans who herself owns a $4M condo in Lincoln Park.

Pritzker says that Illinois is a low tax state? Wow. Talk about “Don’t piss on me and tell me that it’s raining.”

Further proof, the Democrats, their mafia and union bosses will go down the “Scorched Earth Death Spiral” path before cutting benefits or filing for BK. Of course, the people will still vote for them since the Republicans are suppose to be racist.

“Yet the low-tax myth…” I understand your desire not to use loaded language, but this not a myth. It’s a lie repeated by politicians. No one actually believes these lies. If you want to do truthful reporting, then call it what it is. The only people who subscribe to this lie are politicians and those with an agenda. Common people, whom I discuss finances with every day as part of my job, all know this is a lie. No one has ever said to me – “yeah, taxes in Illinois are low”. Not once, ever. They’ve all been across state… Read more »

“Our state doesn’t tax enough. Now excuse me while I call my plumber about those toilets.” You can’t make this up, folks.