I would like you to think of where we were seven years ago, almost to the day, when I gave my first budget address. The City of Chicago’s fiscal crisis, brewing for years, had reached a boiling point.

Thus began Mayor Rahm Emanuel’s final budget address delivered today to Chicago’s City Council. He went on detailing where things stood at the time. So far, so good — he indeed inherited a crisis.

But the message for the remaining fifty minutes was basically “mission accomplished” — bragging — with no indication whatsoever that the city continues to plunge deeper into the abyss — at about the same rate as when he started:

I said we could start shaping our future or let our future shape us. That we would show the world that no matter how tough times got, we Chicagoans were tougher….

We traded gimmicks and financial games for true and honest accounting….

We rejected the false choice of slashing government, regard less of its effect on residents, or raising citywide taxes without real structural reforms to accompany them.

His claimed list of accomplishments goes on in detail. Yes, he did well with certain things — it’s not all as silly as what’s quoted above. Downtown, which glistens, remains attractive to corporate headquarters. The tech community is thriving. Tourists still come. Some reduction in healthcare cost was achieved.

But the central reality remains that Chicago sinks further into insolvency by roughly a billion dollars each year, as it has throughout Emanuel’s term.

His claims about reducing the city’s structural budget deficit are meaningless nonsense because budgets are nothing more than short term, nonbinding, cash spending plans that ignore growing liabilities. (Why is there a structural deficit at all when the city has statutory balanced budget requirement?)

It’s that growth in debt, including unfunded pension liabilities, where the skeletons get buried. You can see it all in this chart showing a comparison of the phony budget numbers to actual results as shown on the city’s audited financial statements during Emanuel’s term: 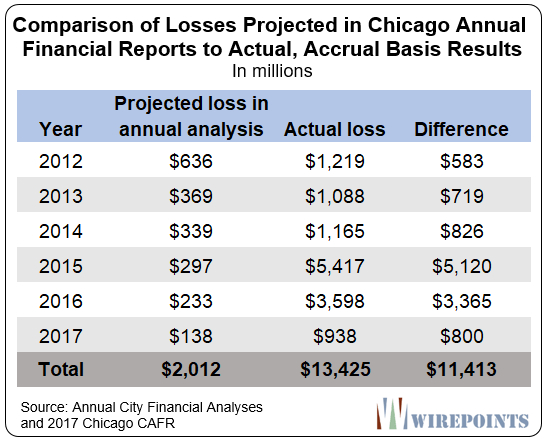 Missing from his speech is any meaningful description of the challenges his successor will face in attempting to truly solve the city’s crisis, beyond one obligatory line — “by no means is our work finished.” Even that was preceded by saying, “Getting the city back on track has not been a walk in the park.”

Population has shrunk for three years running. Moody’s rates Chicago’s bonds and junk and the school system’s bonds as deep junk. No mention of that, and not a word about pension reform.

No, Chicago is not back on track. Chicago is deeper in the hole than when Emanuel took office and sinking at about the same rate.

Through this speech and so many others Emanuel has understated the city’s problems and exaggerated his progress, committing perhaps his biggest sin. He has failed to condition voters to how drastically things need to change. On behalf of his successor, whom I pity, I would say this: Thanks for nothing.