Home appreciation around Chicago is lagging behind national averages. How much is that costing homeowners? Recently released data suggests roughly $12.3 billion per year is being forfeited by Cook County homeowners alone. Here are the numbers:

Start with the total market value of all homes in Cook County (excluding apartments). The most recently available estimate of that total is $348 billion as of 2013. That’s according to a study recently released by the Civic Federation for Cook County only. 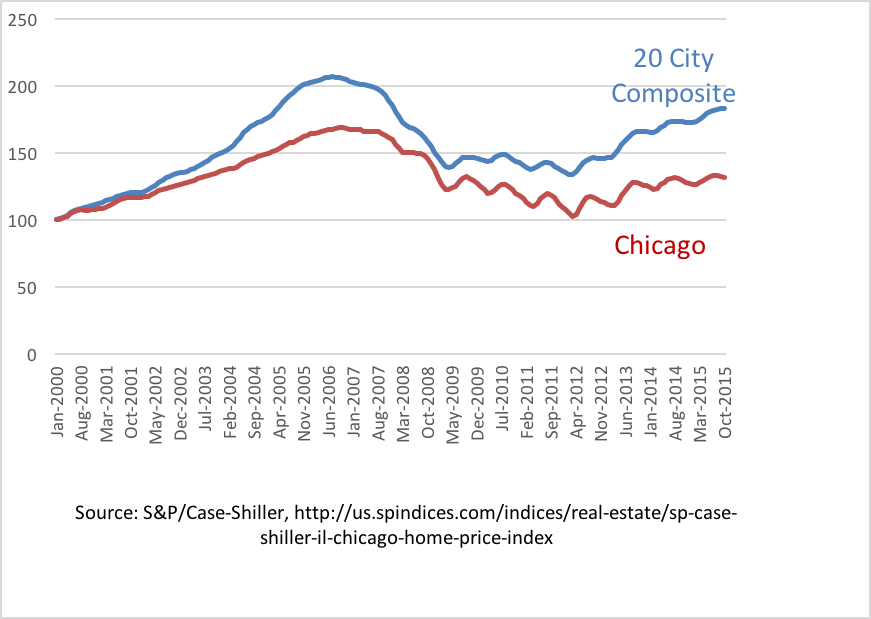 Now, how are homes appreciating in Cook County compared to national averages? S&P’s Case-Shiller Index is the most widely respected source on that. The chart on the right compares its most recent Chicago area home price index to its composite index for the top 20 metro areas in the country since 2000.

From October 2013 to October this year the 20-city average grew by 10.2% and Chicago’s grew by 3.1%. The difference of about 7.1% would have meant $24.6 billion more in appreciation for Cook County homeowners over those two years. They’ve lost out on over $12 billion per year, in other words, had homes done as well here as elsewhere.

That’s a rough estimate because the Case-Shiller Chicago Index averages collar county prices in with Cook County’s, but the point is clear that the numbers are huge. A similar story is playing out in most counties around Illinois. The negative wealth effect is certainly massive.

The flip side is that suppressed prices help keep the area inexpensive, a genuine competitive advantage.

But that would be little comfort to working class families who have actually suffered depreciation, which is the saddest part of the story. Most home appreciation has been in relatively prosperous areas in and around Chicago, but depreciation has hit those who can least afford it. See our recent story about the collapse of Chicago’s south suburbs for examples. For working class families who predominate in most of those suburbs, home equity is often the most significant asset they have, and it’s being destroyed.

I would just like to add a point about real estate in Chicago, and it concerns me. As a downtown resident, I do a lot of walking around. On my journeys, I have noticed the exponential growth of undergraduate students. Many of these students are attending high-priced, low-post graduate job prospect universities, i.e., Columbia, Robert Morris, Roosevelt, East West, SAIC. Recently, I have come to the conclusion that there is a large real estate bubble happening downtown, fueled by student loans, and it is going unrecognized. Yesterday, this article in the Tribune confirmed, for me, my theory: http://www.chicagotribune.com/classified/realestate/ct-mre-0103-student-apartments-20151229-story.html The only… Read more »

I look at real estate all the time. I just cannot bring myself to buy anything in the state of Illinois. Houses in decent neighborhoods have property tax bills of 12000 plus. Farms in Illinois have much larger tax burdens than farms in Indiana, Michigan or Wisconsin.

Been trying to sell a lot for the last 3 years. No one want s to build when the zoning laws dictate huge houses and the high taxes that come with them. Why is the appreciated value a plus for home owners?

When more people want to or do leave the State than come here, you’d think at some point it would affect home prices…pretty ugly.

Leaving the State: The Case-Shiller index represents changes in home prices. The state of the housing market is better represented when the CS index is corrected for interest rates, meaning a changing mortgage payment index. This type of analysis helps to separate the changes in the housing market from changes in interest rates. However, to further clarify the Illinois housing market, a payment index needs to be further corrected for property taxes since taxes are integral to a homeowner’s payment. There lies Illinois housing appreciation problem. The remaining index is now indicative of secondary effects, like potential buyers leaving the… Read more »

Would love to hear what kind of numbers you can come up with. I’m not exactly a math whiz, but common sense says if property taxes go up, people that want to buy have less money for the purchase of the property. I contacted a couple of realty groups prior to the tax increase in the city, but nobody had any links to studies that showed the correlation between property taxes and home prices. It doesn’t take a rocket scientist to figure out if your property taxes double your house won’t be worth more to a prospective buyer. Given the… Read more »

Back in late 2012 when the CS index was going positive and everyone was excited, I put together this attached chart. It basically was saying that homeowners purchase on cash flow (how much they can afford) and the payment index was still negative and people were only willing to have a lower payments.

Here’s a worksheet that will allow you to correct the CS index for interest rates, property taxes, income growth and market demands.

November 24, 2020
The strategy of shutting much of the state down – from lockdowns to school closings – has done far more harm than good, in part because it’s taken health officials’ eyes off of the elderly and the infirm.
View Comments (6) | Add Comment