In private, few Illinoisans of any ideology would disagree that House Speaker Michael Madigan is at the core of most everything rotten in Illinois. Yet voters and the press forget that the Speaker is elected anew by House members after their own elections, which are coming again in November.

Will you vote to re-elect Michael Madigan as Speaker of the House? That question may seem partisan and pointless but it’s not. It’s the first question every House candidate should be asked. Yes or no.

The reason to ask anyway is to elevate the issue of Madigan’s choke hold on the state, and to determine if maybe, just maybe, there’s at least one Democrat prepared to stand up to him at long last.

The question is rarely asked of House candidates. If you do ask any Democrat, expect to see them squirm, but demand an answer. Do not let them weasel out as my state rep, Robyn Gabel (D-Evanston), did two years ago when she was asked. “Depends on who is running,” she said. Cowardice and dishonesty are crammed into that answer.

All but a few of the Democrats who re-elect Madigan as Speaker will be powerless for another two years. Like Ms. Gabel, they will vote as Madigan orders on major issues and Madigan will let them dabble with silly things he doesn’t care about, like a commission looking into wind turbines on Lake Michigan, which Ms. Gabel has championed.

If you don’t already know what causes Democrats to continuously re-elect Mike Madigan, here’s just one anecdote, as told by the Tribune a couple years ago. A woman decided to make a primary challenge against another Democrat supported by Mike Madigan. One of Madigan’s goons showed up at the challenger’s office and said “You aren’t going to like me.” After a few insults, he asked if he could have his picture taken with the challenger. “I keep pictures of all the people we beat,” he told her.

But maybe somebody is is out there with her courage and ready to say, “enough.”

The roll call vote of House members from the last time they elected Mike Madigan as Speaker is below. Look it over just as a reminder of perhaps the biggest reason why so much has gone wrong in Illinois. 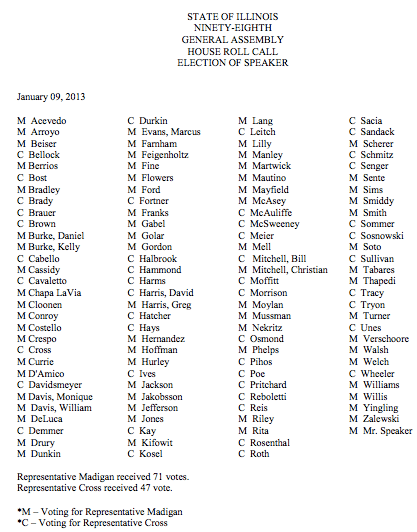 Black Lives Matter Vs. What Matters To Blacks – Quicktake

October 30, 2020
BLM is a poor label for the movement, which should distance itself from BLM the organization because the organization does not represent the views of any race.
View Comments (8) | Add Comment

October 29, 2020
While Chicagoans share many concerns over the city’s policing practices, 79% want the police to spend the same amount of time or more in their neighborhoods. That’s one of the key findings of a new Wirepoints/Real Clear Opinion Research poll that looked at a range of attitudes in Chicago on policing, race and Mayor Lori Lightfoot’s performance.
View Comments (21) | Add Comment

October 29, 2020
The Biden family's influence peddling may end up ranking among America's biggest political scandals, but the blackout on coverage of it is already the media's biggest. The Illinois press is part of it.
View Comments (61) | Add Comment

October 27, 2020
It's beggar-thy-neighbor policy at its stupidest. Instead of banning it, the state participates in it through its EDGE program.
View Comments (11) | Add Comment