The answers to those questions and many more should be readily available to all Illinoisans, especially as the economy begins to gradually open up and people make new decisions about what lifestyle risks to take. Illinoisans have a right to this information and the state should make such science and data public. But it doesn’t.

A comorbidity report – which highlights which deaths were accompanied by a pre-existing condition – is one of the key pieces of data still missing from Illinois’ daily COVID-19 update. That should change immediately.

Whether or not somebody has an underlying chronic condition seems to be the single biggest determinant of whether that person will be hospitalized or die from COVID-19. That’s according to the CDC, which says 90 percent of all virus hospitalizations had pre-existing conditions. Other state and local data put the percentage of deaths accompanied by pre-existing conditions even higher. So you’d think with more than 3,200 deaths in Illinois, the state’s Department of Public Health would publish the information on how many of those deaths had underlying causes. But it doesn’t.

We do know that the virus hits the elderly the hardest and that there’s a high correlation between age and pre-existing conditions. That’s intuitively obvious. But by not providing the data directly to the public, Illinois officials leave many, many questions unanswered.

Start with Illinois’ most vulnerable demographic – those over 60. Over 86 percent of Illinois’ 3,241 deaths were in the over-60 age group. 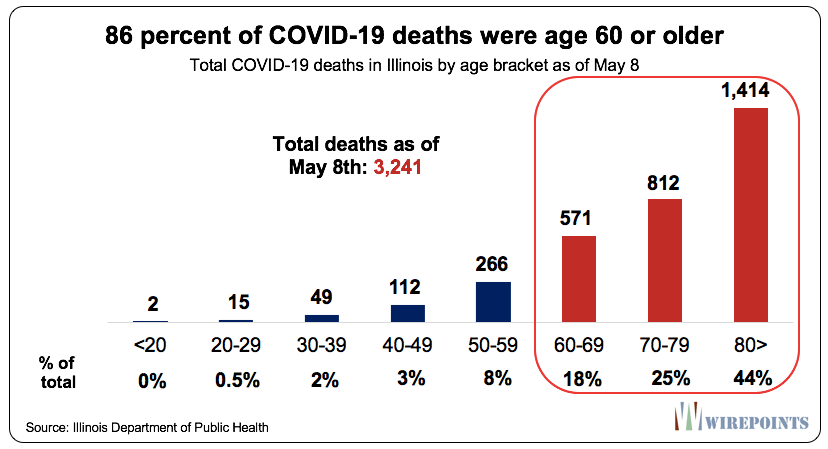 We also know that blacks have been particularly hard hit by the disease. Blacks make up about a third of all COVID-19 deaths in Illinois, though they are just 15 percent of the state population. Same critical questions. Are these deaths mostly due to underlying causes? Are most healthy blacks with no pre-existing conditions less vulnerable? Who, exactly, is dying? Gov. J.B. Pritzker and Illinois’ health officials should provide that information to people who otherwise are left to wonder and fear.

And let’s ask those same questions about the state’s younger deaths. About 180 Illinoisans under the age of 50 have died of COVID-19, including just 15 Illinoisans aged 20 to 29. Underlying causes? Healthy? Knowing that makes a big difference, especially since the under-50 population makes up an overwhelming amount of the workforce. Who’s most at risk and who isn’t? Much of that could be potentially answered by a comorbidity report.

Think we don’t have such data?

States and cities around the country report comorbidity data frequently, some daily, as part of their efforts to educate the public and be transparent about the disease. A good example of that reporting comes from New York. Its daily data page reports that of the state’s 21,045 deaths as of May 6, almost 90 percent had at least one comorbidity. Note the detail it provides, though it could provide much more, particularly by race.

Louisiana also publishes weekly comorbidity data on its public health website. Recent data from the Louisiana Department of Health “shows that only three percent of people who have died in Louisiana had no underlying health conditions.” 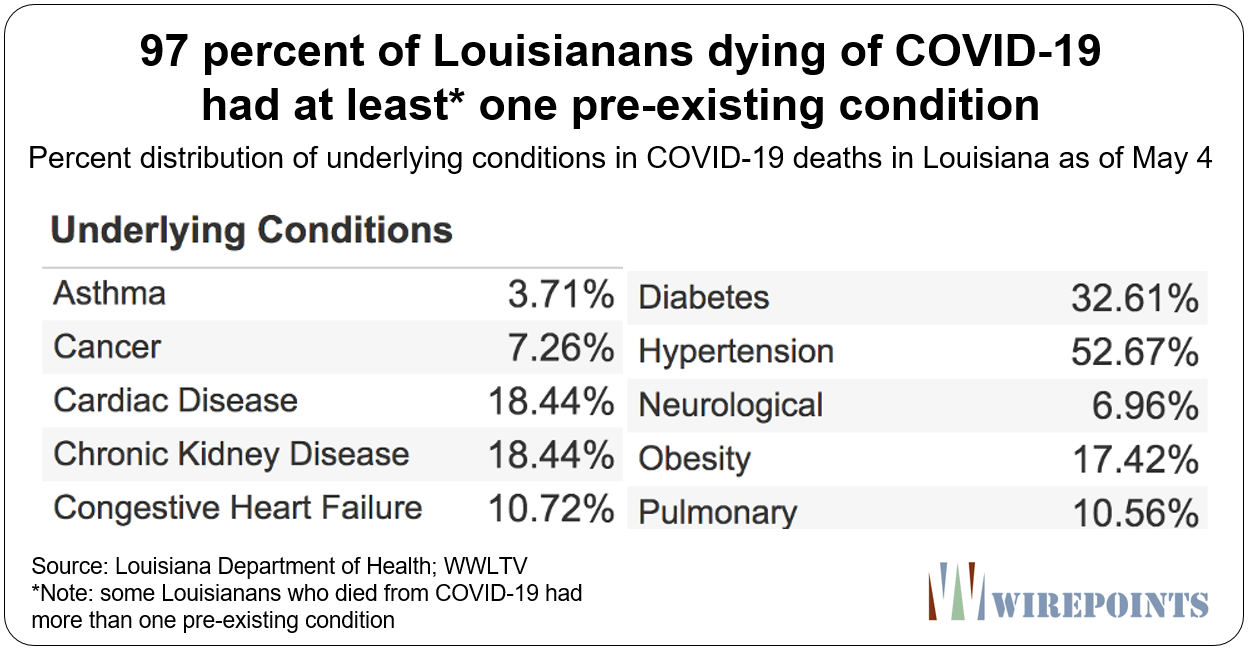 We only get a hint of what’s going on in Illinois from one Chicago number. The city reports that 94 percent of Chicagoans who died from COVID-19 suffered a comorbidity. In all, of the 1,160 COVID-19 deaths in Chicago with a known medical history, 1,090 had underlying conditions. 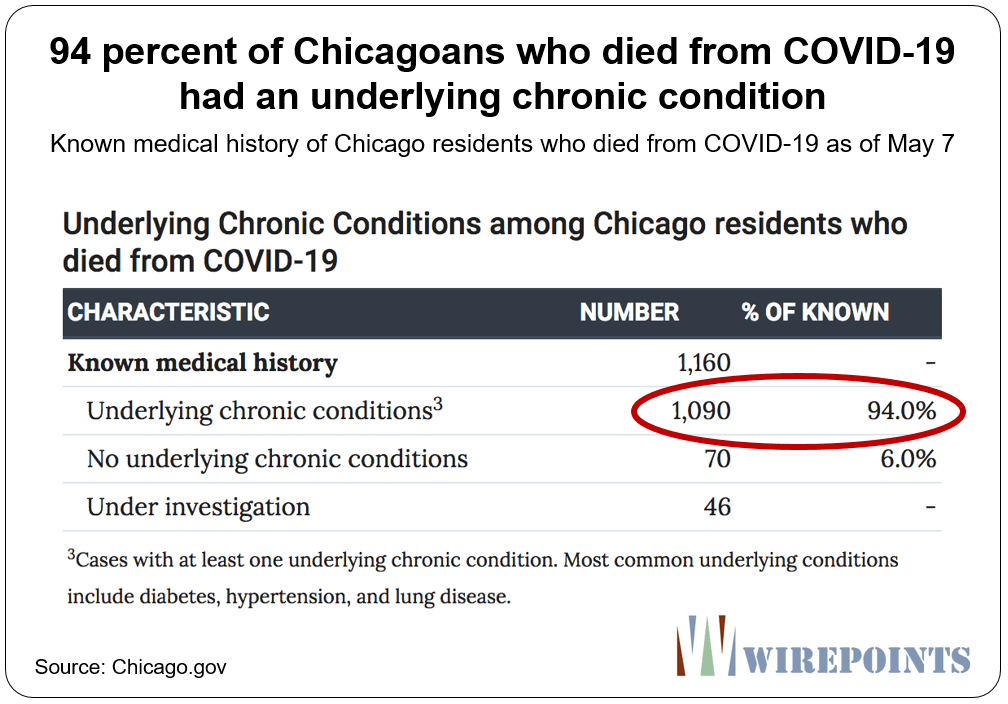 Chicago’s report is limited in that it doesn’t break down the underlying conditions. But it’s still better than what we’re getting from the state.

It’s a big failure for Gov. Pritzker to not publish the science and data he says he’s using to make health and economic decisions. Without that information, residents continue to be in a fog about what’s really going and just how much risk they individually face.

*(An unrelated but equally important question is, how many people died from a pre-existing condition but were tagged as a COVID-19 death because they had the virus, too. But that’s the subject for a different piece.)

Science demands that data on underlying conditions be collected and released. This isn’t happening because Illinois is ruled by an anti-science dictator

I think you’ll find that the patterns fit pretty well.

I just did a quick calculation for age 80+

Can’t hold ’em “down on the farm” is they know the truth. Control…at any cost…is their mantra.

What percentage of chicagoans have at least one of these conditions? That helps to compare those who die to the population as a whole.

We can’t make this political or else half the population will not even read an article. If people are going to continue to trust the leaders and follow guidelines two things must happen. One is we need accurate and complete information so that people can evaluate and project their own risk exposure. This article lays out much of that.
The other need is that the leaders must make the people believe they are accessing and evaluating our feedback and modifying their stance based on risk management and not on politics.

This is all politics. Republicans generally want to accept the risk, prepare for it, and try to continue on with life. Democrats want to shut down the state and keep it closed forever. Jabba’s plan to keep malls closed for months and months, possibly years, on end, is completely absurd, and its’ looking more and more like he wants to destroy the state’s economy to get a bailout, and then impose top down control on everything. I’m not a conspiracy theorist by any stretch, but his response to the ‘science and data’ he claims he is using looks an awful… Read more »

Fred, everything in Illinois is politics, all the time. If you think these people suddenly escape their cynical thought process for a health crisis, you have not met these people.

They would politicize a nuclear wipeout of the state.

They live on it, they feed on it, and they’re in charge. They will never let their guard down.

The truth is that Democrats don’t trust people with this information. Most Democrats I’ve seen and known are control freaks. They want to control everything about your life and its conditions. Why? Because they arrogantly think you are a rube, and that they know what’s best for you. So when information has the potential to be used “the wrong way” (according to them), they would prefer to stifle it. They don’t want you reaching independent conclusions or thinking that invalidates theirs. Remember, they want you to obey, and that’s harder to do when you are armed with data to rebut… Read more »

What’s the matter, Democrats? Don’t like reading the truth? Provide a competent rebuttal — nothing is stopping you. I like to engage, and so do the others here.

I would prefer that all Democrats here vote my comment down. I’m curious how many of you are reading these posts.

It would please me to know that you have finally been exposed to what regular working people really think of you and your policies, versus what you think of yourselves.

If not just obesity, it’s also obesity related health issues: hypertension, renal disease, diabetes. All of this economic disaster is so Robert & George can get their big gulps, and the rest of us go into poverty. Complete nonsense. I’m at the point now of saying that the obese are own their own. Really, I don’t care any more. The fat in society have had six weeks to lose some weight. They better start losing weight even faster these summer months because it’s literally life or death for them. The rest of us will get coronavirus, and if we get… Read more »

People are reported as dying “with” Covid, not “from” Covid-19

Don’t confuse them with facts, and Bayesian conditional probability

We’d be in “phase 5” If this weren’t an election year with some important ballot measures like progressive taxes to be voted on.

Providing full and complete Wuhan Virus data is not useful to Mike Madigan (remember that Pritzker is simply Madigan’s ventriloquists dummy). Just like his fellow dictators in Communist China, Madigan wants to manipulate and control the information to serve only him and his putrid political goals. For King Madigan, the taxpaying chumbolones should just shut up and hand over their money.

The majority of those who have passed since the beginning of this more than likely had one or more extenuating health issue. But scarf queen stated that even if they haven’t been tested and they seemed like they had the symptoms (of which there are many and not exclusively to the coronavirus), she said to list it as covid. There have been sites that state that this is what was done in Italy. They have gone back and found out that of the people who passed since the start of this epidemic that probably 3/4th of them were not due… Read more »

Now she’s whining that she can’t trust the “cooked” CDC numbers anymore. Even though she’s been doing that since the beginning and requiring them to report COVID-19 as a primary cause of death no matter what underlying health issue may be present.

The state could release the ‘body mass idex’ #s for all the victims….sure gov-fat boy would love that

I’m honestly shocked that all-you-can-eat buffets were not opened throughout the state in this last round of Wuhan virus state controls. JB must certainly have an aching need for this type of food service.