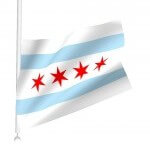 Only one thing can be said to support the Sun-Times call this week for Chicago to add a fifth star to its flag to represent Millennium Park. It’s that the way those stars are drawn, if you hang the flag upside down, which is an internationally recognized sign of distress, the flag still looks the same.

Like the pols who built the park, the Sun-Times ignores its staggering cost and looks only at its virtues. Sure, it’s a magnificent asset for Chicago, but should it have been built at far less cost? The Sun-Times shrugs off in three sentences the catalog of horrors that went into it its construction. “Fifteen years ago, no one would have predicted the park’s massive success,” says the Sun-Times. Actually, everybody would have predicted at least what we got had we known how much it was going to cost.

A Tribune story this week details that catalog of graft, cost overruns, bribes, lies, incompetence and sweetheart deals that turned what was supposed to be a $150 million project with no cost to taxpayers into a $490 million one costing taxpayers $95 million — and the park still doesn’t pay for itself, as promised. The reputational cost is just as ugly. “The Chicago Way” has recognized meaning throughout America now, thanks, in part, to how Mayor Daley built that park.

Enjoy the park, but read that Tribune story, too.

Chicago home prices at the bottom of the barrel nationally – Wirepoints

July 2, 2020
The short-term data for Chicago home prices is bleak, and the longer-term picture captures just how badly the Windy City area has done since the new Millennium.
View Comments (11) | Add Comment

July 1, 2020
It’s not often that we’re on the same page with Tom Tresser of CivicLab and Ben Joravsky of the Chicago Reader. But on the central problem with tax increment financing in Chicago – their abysmal lack of transparency -- we’re on common ground, along with most everybody else.
View Comments (16) | Add Comment

June 30, 2020
The state is drowning in public pension debt and anyone living here will be forced to pay that debt down over the next two to three decades. For many considering a move, that’d be reason enough to avoid this state.
View Comments (25) | Add Comment