The Daily Herald editorial board says they are all for local control and an empowered electorate. Until, that is, the electorate does something the paper doesn’t like, such as daring to call for lower property taxes.

Take the case of Lisle, Illinois. Residents there are pushing for a referendum to lower school property taxes by 10 percent. They’re hoping to use a new law that lets residents seek property tax relief if their school district spends more than what the state says is an “adequate” amount on education. Lisle is eligible because the district spends 44 percent above what the state labels as “adequate.”

Yet in a recent editorial, the Daily Herald editors criticized the referendum effort, calling the ability to request tax relief a “loophole” in the law. They say school districts like Lisle CUSD 202 are “vulnerable” to tax-cutting referendums, as if they’re some drastic attempt by residents to harm their communities.

In fact, the editors went so far as to say: “We’ve always been in favor of democracy and empowering the electorate, but in this case a referendum would be counterproductive.”

The Daily Herald might still favor democracy if it actually focused on what’s happening on the ground in communities across Illinois and Lisle, in particular.

Since the Great Recession, property values in Lisle’s school district have fallen 13 percent while property taxes have grown nearly 20 percent. 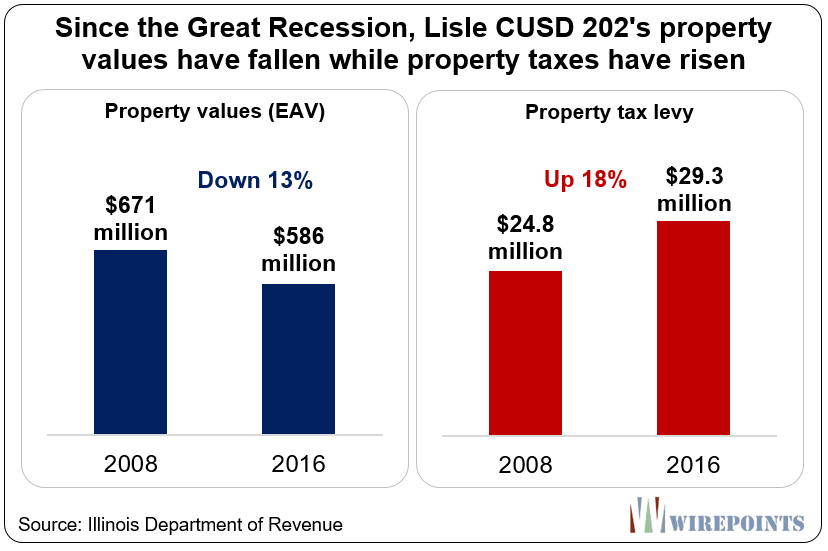 The end result is an overall effective property tax burden in Lisle that exceeds 2.3 percent, nearly triple what the average resident in Indiana pays. Lisle residents are looking for a little relief. So are all Illinoisans, who, on average, pay the nation’s highest property taxes.

The Herald says it’s concerned that any cut in Lisle’s taxes could hurt the quality of education in the district.

But as Lisle residents could tell you, a vote to reduce property taxes isn’t about hurting classroom spending. It’s about making communities affordable and cutting the fat in Illinois’ education bureaucracy. And there’s plenty of bureaucratic fat to cut in Lisle – a fact the Daily Herald conveniently ignores in its critique.

Residents in Lisle suffer from the same problem that’s affecting people all across the state: local government costs are out-of-line with what residents can afford.

In Lisle 202’s case, the combination of a shrinking student base and ever-larger property tax levies has driven per student spending up nearly 5 percent per year since 2000.

In 2000, per student spending was just over $10,000. Since then, Lisle 202 has lost nearly 20 percent of its total student population and has doubled its property taxes.

A lot of that tax money has made its way into the school district’s administration. All of the district’s top ten administrators make more than $130,000 in total compensation a year. 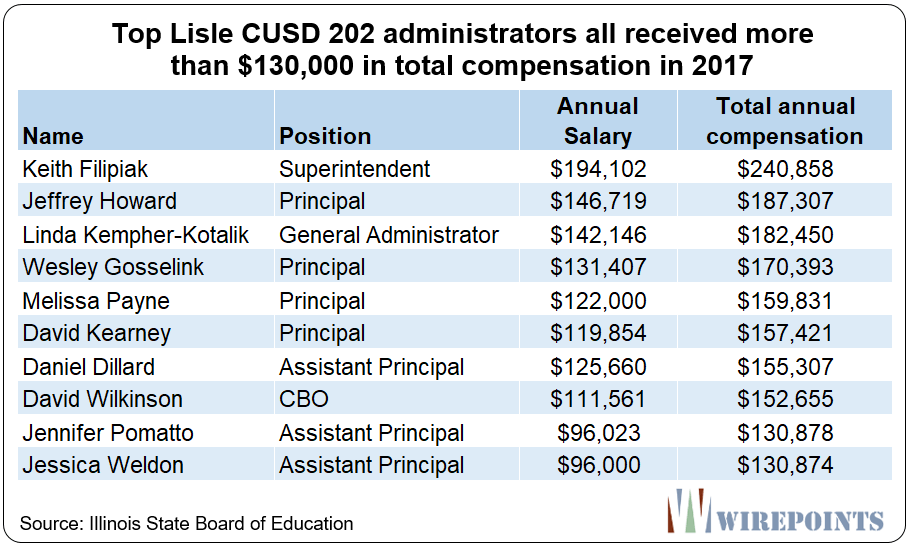 And across the district, over a third of all employees make over $100,000 in total compensation.

On top of that, Lisle 202 workers receive other lucrative benefits. Teachers have the entirety of their required employee pension contributions paid for, or “picked up” by the school district. Over 80 percent of their health insurance premiums are paid for. And they’re allowed to accumulate enough unused sick leave to boost their pension benefits by up to two years. All those benefits and perks could be pared down to give Lisle taxpayers some relief.

Those generous salaries and perks also create generous pension benefits, the costs of which are borne by taxpayers across the state.

The average career Lisle 202 employee retires at the age of 58 with a final average salary of $116,000. They receive a starting annual pension of $84,000 and will collect about $2.6 million in total during their retirement.

And top retirees can expect to receive anywhere from $3 to $6 million in pension benefits over the course of their retirement. 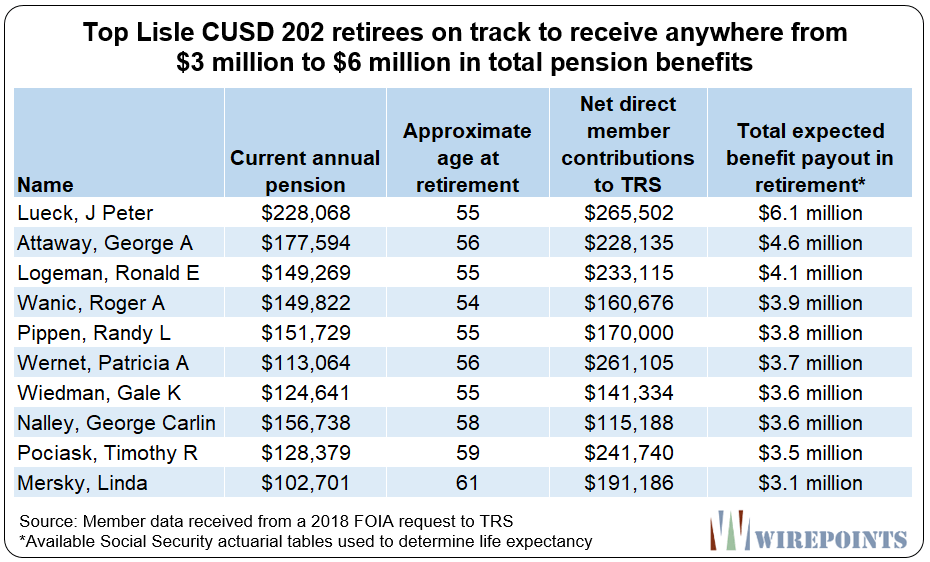 In the end, all these costs – salaries, perks and pensions – play a role in driving up Lisle property taxes. Lisle residents are not wrong in trying to lessen their burden.

The Daily Herald has no business lecturing residents that want a referendum to lower their out-of-control property taxes. The new law finally gives residents across Illinois – from Byron to Erie to Graymont – a tool to help bring their burdens down to a level they can afford, and yet the Daily Herald opposes it.

If the editorial board really wants more education dollars for classrooms, it would be better off promoting laws that end excessive administrative pay and perks, consolidate inefficient and overlapping school districts and enact comprehensive pension reform. Those are the things Illinois needs to both improve education and lower property taxes.

Wirepoints has covered all those issues in detail in “Administrators over kids: Seven ways Illinois’ education bureaucracy siphons money from classrooms.”

In the meantime, Lisle residents looking to lower their property tax burdens don’t need roadblocks from the media – the very people who should support a more engaged citizenry.

The Daily Herald is a liberal rag that is highly pro-government and government intervention; they always see government as the solution to everything.

The average number of years worked, which is less than the average years of service, for TRS (teachers and administrators) would also be eye opening.

35 years of service is required to achieve full retirement benefits for Tier 1 pensions (those who began their career on or after January 1, 2011).

The Daily Herald did not back up their conclusion with a reference to any detailed analysis.

That is because none exists.

They are basically saying, no amount of money is too much,

You are so right and we failed to call them out on that. Not one single fact by them, which breaks the rule for any editorial or opinion piece. Horrible editorial full of rhetoric. Thanks, Mike.

September 22, 2020
Mark was on with with Dan Proft and Amy Jacobson discussing Wirepoints' new report on the need for comprehensive pension reform, the push for a progressive tax and the potential for a federal bailout for irresponsible states like Illinois.
View Comments (3) | Add Comment

September 22, 2020
Wirepoints’ plan immediately cuts the state’s official unfunded pension and retiree health liabilities by over $70 billion, dropping debts to $120 billion from $192 billion. That reduction saves the state an average of $5 billion a year in retirement costs and reduces retirement costs as a share of the state’s budget to 17 percent from 26 percent.
View Comments (3) | Add Comment