One graphic perfectly captures the absurdity of Illinois pensions over the past three decades.

Alito didn’t use the graphic below, but he could have because it makes his point.

In 1987, pension promises made to active workers and retirees in the state’s five state-run pension plans totaled just $18 billion. By 2016, they had ballooned to $208 billion.

Contrast that to the state’s budget (general fund revenues) which was up just 236 percent over the same time period. Or household incomes, which were up just 127 percent. Or inflation, up just 111 percent.

Promised pension benefits have blown past any ability of the state, the economy or taxpayers to pay for them. 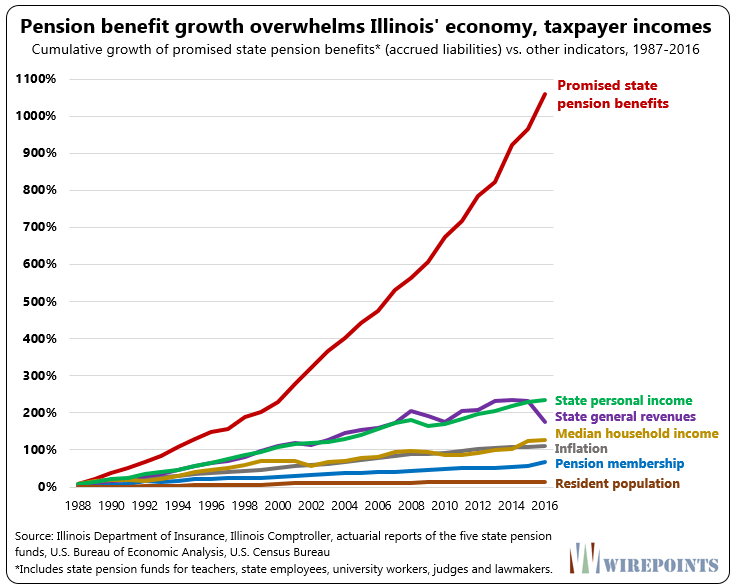 Wirepoints released a report on these booming benefits earlier this year, and while it received strong coverage online nationally, Illinois’ traditional media didn’t want to touch it. The findings interfere with the narrative that’s repeatedly promoted by public sector unions and politicians – that the crisis is all the taxpayers’ fault for failing to put in enough money towards pensions.

Overpromising is the real culprit of the pension crisis. Freezing and reversing that growth in promised benefits is the fair, and only, way to fix things.

The above graphic gives taxpayers every right to demand concessions from their public servants. The Janus ruling will hopefully give them more power to demand them.

And union members have a strong incentive to come to the bargaining table. After all, it’s their retirements that are teetering on the edge of insolvency in a state just one notch from junk status.

But If the unions won’t deal, Illinois should go ahead and freeze salaries, cut the subjects of collective bargaining, move to defined contribution plans, reduce headcounts and work with the feds on a form of state bankruptcy. With the constitution currently preventing any changes to pension benefits, those are the only levers taxpayers have to save this state from collapse.

Please stop writing the phrase “one notch from junk status”. Moodys will ensure that it never goes to junk. Every step taken by goverent in Illinois that further screw s over the taxpayers, is REWARDED promptly by moodys with a lower risk rating. As long as politicians keep screwing us, those bond ratings will be kept above junk. The day taxes in Illinois become fair, is when it goes to junk. A junk status is a good indication, not a bad one. because it’s the only indication where we know the taxpayers are no longer being sucked dry to keep… Read more »

Your article is wrongly focused on an effect, rather than a cause. The primary cause of the budget deficit is interest obligations on state bonds that are held almost exclusively by private bankers. Illinois should pull all its funds out of Wall Street, establish its own Bank of Illinois and begin to replace private bank bond holdings with reasonable financing and infrastructure growth, like the Bank of North Dakota, a state institution that has no budget problems. The problem has always been the same: bloodsucking usury.

Nonsense. Put up your numbers.

Ah, but your graph IS wrong. Your premise is wrong, and your conclusion is wrong. “A dramatic rise in pension benefits – not funding shortfalls – caused Illinois’ state pension crisis” “The report proved a lack of dollars wasn’t the issue.” Wrong, wrong, wrong. A three-fer. That climbing red line is an eye opener, but it is a red herring. —————————- If you are comparing annual values such as personal income, state revenues, or median household income, the ONLY valid pension data for comparison would be total annual benefits paid (for a pay as you go plan) or the normal… Read more »

Stephen, all I can say is you’re mistaken. FYI, annual pension payouts to members in TRS alone have grown nearly 1300 percent since 1987. In 1987, TRS paid out $428 million in benefits. In 2016, it paid out $5.9 billion. Even after you adjust for membership, that means pensions have risen multiple times faster than Illinois’ economy or taxpayers ability to pay.

All I can say is I disagree.

“One graphic perfectly captures the absurdity of Illinois pensions over the past three decades.” I had some trouble understanding your perfect graph when it was first published (June 27, 2018) If I may humbly suggest one additional factor in your chart, that being the actual benefits paid out in 2016. (I believe that was $18.6 billion in 2016.) Suggest a dashed red line. All the other data in your graph is annual figures… State personal income State general revenues Median household income Inflation Pension membership Resident population If the actual annual pensions paid out in 2016 were $18.6 billion, I… Read more »

Oh, i see, this is just another union bashing exercise, from the far right misanthropes.

So, we should be bashing the taxpayers then, right?

Based on your smarmy, condescending reply, I don’t think you would be ready for it, or understand it.
But I’m sure you have some idea, based on my previous comment.

Who cares what some foreign **** thinks? Don’t encourage the anti-American troll.

Anybody who has ever belonged to a public sector union and been a part of how they work should be able to sense that bargaining with a liberal government is like shooting fish in a barrel and the barrel is going to run out of fish. The Founding Fathers erroneously imagined that America would always be basically White, Anglo-Saxon and Protestant. They plainly stated that without a common moral code, the Republic would not stand. Had that remained so, the country would have succeeded. With the Protestant work ethic and strict practice of group morals in the community, unions and… Read more »

OK guys, clean it up. Try to keep the comments connected to the article, please.

Why are you making this call now? Why didn’t you step in earlier, when snapperhead made his disgusting and off topic comments?

I’ve deleted some very off-topic and harsh comments, including polite responses thereto by some of you regulars, towards the end of keeping this comment section as good as it has been. We will be laying out some further guidelines.

Did we ever establish Peter’s utopia? Australia, amirite?

Nixit, we’ve decided to limit comments to things topical, so we’ve taken down that thread. Will put up guidelines soon.

You hear it over and over: “illinois teachers don’t get social security” bla bla bla

Ok Teach, you want social security (in a pigs eye they do) consider it done!

Because if we calculated your benefits on the same basis as social security will ours, the pension crisis and the state’s finances would be completely fixed!

It is worth mentioning that Illinois teachers don’t get Social Security, and taxpayer contributions to the future retirements of recently hired and future teachers are pretty close to ZERO. That entire increase in pension costs is for older generations who promised themselves things and refused to pay for them. “Overpromising is the real culprit of the pension crisis.” Which generations benefitted? “Illinois should go ahead and freeze salaries, cut the subjects of collective bargaining, move to defined contribution plans, reduce headcounts.” Which generations would be harmed? “With the constitution currently preventing any changes to pension benefits.” Conveniently, with no one… Read more »

Illinois teachers would never trade their pensions for social security; it’s a bogus argument. The average s.s. check is about 1300-1400 dollars a month which is about a fourth of what the lavish union checks are. Some teachers receive in excess of $100,000 a year in pension payments and some even get as much as $140,000+. It depends on how they personally rigged the system.

Plus they receive these whopper pensions 5-10 years earlier than the age 67 for full SS benefits.

I think you are avoiding my point. Teachers hired in recent years, and future teachers, don’t get pensions anything like that. The big benefits went to those in Arizona, or about to go there.

Maybe non-public sector non-Generation Greed members should look to them as possible allies, instead of alternative victims.

If they get any type of defined benefit pension or healthcare it is to much. I have no objection to a defined contribution plan that matches the average employer contribution of private sector plans. Healthcare benefits in retirement should be group plan access only , retiree pays 100% of the cost.

With all sincerity I am still a bit lost as to why the average citizen should care if the state collapses? I really am missing what in Illinois is worth preserving or caring about. Realistically, it seems, the entire country would be better off if IL simply reverted to fertile farmland. As someone born and raised in IL, I became a consummate road warrior,traveling throughout this great nation on business almost every week for decades. I would leave home on Sunday and usually return Thursday or Friday. When I was on the road, I can;t ever, once longing to be… Read more »

Short answer: The downstate core of conservative voters like myself who did not vote for, and do not deserve, the misery being inflicted on them by the corrupt Chicago machine. Illinois is a deep red state outside Chicago and our values and heritage should be preserved.

Good think the suburbs and downstate areas have their own state and local pension systems separate from the city of Chicago. You’ve got no problems, right?

I am not from Chicago or a suburb. That being stated, I am curious if you would mind fleshing out what aspects of heritage you wish to preserve. I am, in part, a cultural Anthropologist by training so your comment greatly interests me.

My sentiments are with you but I think that a Greek style meltdown (which is coming) and the anarchy which could obtain will have impacts beyond Illinois, particularly in the financial markets. 2008 taught us the inter-connected nature of various entities in our economy. Of course, when it comes to absurd debt, that is an intended feature, not a by product, of the system put in place by the kleptocrats who run Illinois.

September 29, 2020
Ted was on Univision warning Illinoisans about the negative impacts of tax hikes like the progressive income tax. He warned that giving billions more to the most corrupt politicians in the nation would only make things worse.
View Comments (2) | Add Comment