You’d think that principle might be now be obvious, given how the terms racist and racism are used as often as they are. Maybe you’ve been hoping that racism’s most genuine enemies are concerned that overusing the term is causing real examples to be overlooked. 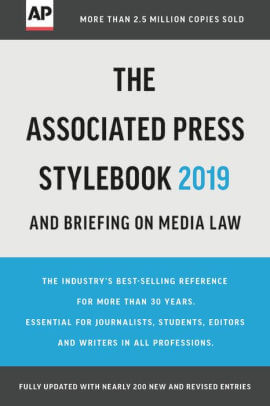 Instead, reporters now have the green light to use those labels far more often, as many of them will see things. In fact, some will feel obligated to do so, as they are interpreting new guidelines  from the Associated Press. Those new guidelines are in the A.P.’s revised Stylebook, which is about more than style. It’s about politically correct language, and it’s the definitive source. We know it’s the definitive source not just because many reporters obey it but because, well, the A.P. says so.

It’s is a particularly bad development for places like Chicago that sit on perpetual racial powder kegs.

This is about separating factual reporting from opinion. Separately labeling commentary and opinion supposedly is a core ethical obligation in journalism, but the A.P.’s new guidelines undoubtedly will be accepted by many as permission to throw away any pretense about that.

Under the new guidelines, reporters should forget what it calls euphemisms like racially charged, racially divisive and racially tinged.

Instead, just call those things racist or racism, say the guidelines. At least that’s how many reporters will interpret them.

Some news sources already seem elated, welcoming the guidelines as authorization to report racism as fact in news stories:

Trump is undoubtedly who they’re most giddy about since they can now just report he’s a racist whenever he trolls on racial topics or goes over the top, as he often does

But this will go far beyond Trump. Think about the countless stories where those so-called euphemisms – or something still weaker — were appropriate but should have been replaced, according to the A.P., by racism reported as fact. Some examples:

Hillary Clinton made what Fox News called a racially tinged joke. Fox should have called it racist? John McCain’s comparison of Barack Obama to young, white celebrities was racially tinged, according to the New York Times. No, that was racism, they apparently should have written.

Illinois offers a good example of the inflammatory impact the new A.P. standards could have. A black legislator has a bill pending to mandate minority representation on boards of directors of public companies in Illinois. Last week, an opponent in the legislature criticized the bill with language that undoubtedly could be described by those euphemisms the A.P. now dislikes. The black sponsor said he was offended and the critic has now apologized.

Should the criticisms of the bill have been labeled racist in the news stories about it? Opinions may vary, but the A.P.’s guidelines clearly would encourage a news source to report the opposition as racist.

A hotter example of how the guidelines may be abused came up in a Twitter skirmish I had recently with Dan Mihalopoulos, a reporter at Chicago’s NPR station. He wrote it’s “Already time to implement the new AP policy on calling a racist a racist,” referring to a news story about Pat Buchanan saying “we haven’t fully assimilated African-American citizens.”

The underlying story did it right, as I see things. it simply reported what Buchanan said. The story was by a source that’s left-leaning – Mediaite.

Instead of just reporting what Buchanan said, Mihalopoulos apparently thinks the story should have said racist or racism, per the A.P. policy.

I tweeted back: “Ridiculous. Instead of reporting what somebody said, you’re saying to report a subjective, highly charged characterization of what they said using a term defined very differently by different people.”

Mihalopoulos entirely missed that point, resorting instead to trying to link Buchanan’s views to mine. That’s hardly relevant, nor accurate, since I don’t share Buchanan’s views. He answered, “You think anybody needs you or Pat Buchanan to tell them how to assimilate? Including those whose ancestors were brought here forcibly as slaves? Assimilate to what? And you will reform media with such bias!” He proceeded to block me.

If Mihalopoulos wants to write an opinion piece saying Buchanan or his words were racist, great. But labeling things that way in a news story about what was said would violate the basic, ethical duty to separate reporting from opinion.

What’s fact is that racism now has vastly different meanings to different people. The new left’s version is about systemic, ubiquitous, implicit bias, and conformity to what many of us see as politically correct rules of language police like the A.P. To me and many others, it’s about judging on color instead of character and violating what Chief Justice Roberts wrote: “The way to stop discrimination on the basis of race is to stop discriminating on the basis of race.”

Other people — good, reasonable people — may have other definitions, so it would be fine to see opinion columns branding Buchanan or his comments as racist or not racist.

But this is about reporting news.

That’s one obvious problem with the A.P.’s new guideline. Despite being fighting words to many, racist and racism are exceptionally controversial in meaning. The country is already torn apart over this. Why use those terms except where there’s some consensus on what they mean?

There’s certainly no shortage of examples where there should be consensus. To take just one, consider the conduct reported at Chicago’s Water Management Department. A white worker urinating in the cup of a black co-worker, crosses in front of the lockers of complaining African American employees, copies of Mein Compf placed on the desks of black co-workers and more.

I doubt many Chicagoans know that story, except black Chicagoans who are probably all too familiar with it. Why? Isn’t it partly because stories like that are lost in the fog? That’s the biggest problem with the A.P.’s new guidelines. The fog of stories about racism will thicken as reporters report it as fact where they, subjectively, see it. The public will become further desensitized.

If you carefully parse through the A.P.’s new guidelines, you can make a case that it actually calls for use of racism and racist only in limited circumstances. Racism, it says, “is a doctrine asserting racial differences in character, intelligence, etc., and the superiority of one race over another, or racial discrimination or feelings of hatred or bigotry toward people of another race.”  [Emphasis added.] And the guidelines say not to use the word unless it really fits. That would be a fine interpretation.

But look through the whole thing and you’ll see it’s filled with weaselly contradictions that reporters so inclined will cite as their go-ahead for labeling more conduct as racist. Euphemism has insulting connotations. Users of the terms the A.P. calls euphemisms are cowards, the standards imply. And there’s this silliness, which is impractical for reporters with deadlines: “[D]ecisions should include discussion with colleagues and/or others from diverse backgrounds and perspectives.”

In short, many reporters will interpret the guidelines as this simple headline put it: “Reporters Urged to Use 2 Words They Often Avoid.”

Count on seeing racism reported as fact more often. It certainly will include the A.P. itself, which already is no exemplar of objective reporting. It will include other reporters who obey its rules, which apparently will include Mihalopoulos, whose NPR station is already among the most biased news sources in Illinois.

Their stories probably will be infused with the usual pretense of racial togetherness and understanding.

The opposite will result.

Welcome to Orwell-land where words don’t mean what they are supposed to mean. Cookie-cutter leftist journalism infects news like some social, cultural virus which reminds one of the “invasion of the body snatchers”.

The press reports on the new racist Associated Press Stylebook 2019.

Yep, the word has lost all meaning. High-Horse Syndrome continues to rage within the left-wing echo chamber. This will only have the opposite effect, pushing moderate/centrist whites to the right, or staying home on poll day.

Disclosure: I say this as a right-leaning centrist, not as a republican or conservative.