The first major poll in Illinois on Democratic presidential candidates came out last week from the Paul Simon Public Policy Institute. It shows Sen. Bernie Sanders with ahead with 22% of likely Democratic voters followed by Michael Bloomberg with 17%. Details are below.

However, the poll was taken from February 10 through 17, before Bloomberg’s disastrous debate performance on the 18th.

Here’s a simple question that would tell us so much about Illinois lawmakers and candidates if asked by reporters, editorial boards and voters: Will you support Bernie Sanders if he is the Democratic nominee for president? 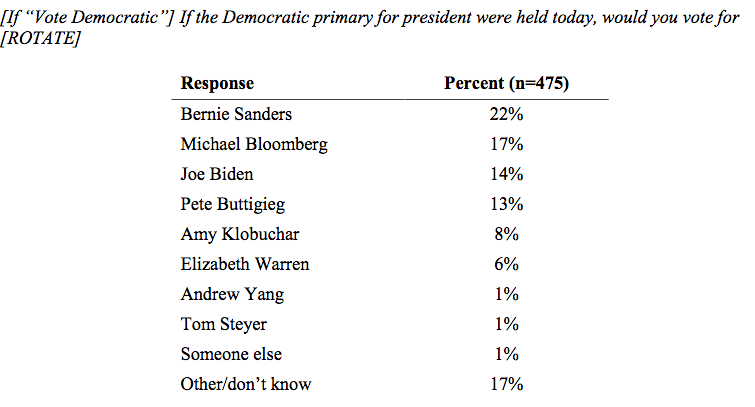 Whom will Wirepoints readers living in Cook County and Illinois’s 3rd congressional district district vote for? You’re all pulling a D ballot in the primaries, no? If there are no meaningful R’s running in your district, pull a Democrat ballot. Otherwise you risk of being stuck with Foxx and Newman. You can always leave the presidential ballot blank. Or have some fun and write-in Todd Stroger Jr.

Remember when the public sector unions dumped big bucks behind Dillard in the Republican Gubernatorial primaries in 2014 then doing the same for Quinn in the general? Payback time.

More is the best D candidate for State’s attorney. “Q: If you are a challenger, in what way has the current board or officeholder failed the community (or district or constituency) A: The people of Cook County have lacked legal representation and leadership in the criminal justice system for too long. Kim Foxx talks about progressive reform as a matter of social, not actual justice. She boasts about emptying the jails and not charging offenders as solutions to past injustice. Foxx won’t charge retail theft; repeat gun offenders and carjackers are back on the street with astonishing regularity; and drug… Read more »

this is just a massive YIKES! What is wrong with people!

With the sort of low information voters this state has, is it really any wonder? A fat, male version of Paris Hilton rode “orange man bad” all the way to the governor’s mansion just two years ago, after all. As an aside, I work with a Bernie supporter, and the sheer lack of knowledge of how anything in the world works that she displays is depressing. What’s even more depressing is the number of others just like her.

it’s more than just a lack of knowledge, it’s more a ‘fill in the blank’. Bernie purposely is vague for his ideas and costs so that his supports can leave it up to themselves to describe the details, which is how we get his supporters suggesting gulags for conservatives.

Illinois is hopeless and determined to self destruct. Each day brings more proof. Let the liberals have their lawless, broke, socialist leaning midwestern state. Wash it’s awful stench away in a state that still values honesty, freedom, and God.

The uninformed fools . If you talked to one of them,They don,t comprehend He will get the homeless in your back yard,tax you to 80% percent.They want your guns and love the invading hordes from mexico.Be defenseless for Berny, We left the burning dumpster fire for a free AMERICAN state.Just being there to take care of sbusiness a few days this year you can feel the evil and of all the murder of babies the dems love,like wild savages when their latest kill the kids law was made into law, for our convince.Dems love baby killing.A dem from southern illinois… Read more »

My gut feeling is that Illinois will be in play if Bernie is the ballot in November. It will be very close. Only the truly naive and foolish will vote for Bernie. Of the libs I know, only one has actually told me that he will vote for ‘ANYONE other than Trump”. The suburban crazy harpies will likely vote the same. The other libs I know are basically NeverBerners. The more middle of the Democrats not looking for revolution, but merely changes around the edges, which probably describes 75% of the party in the general. They might just leave the… Read more »

Thanks for posting that, Bernie has 24% of the vote in IL in the 270 to win 2/21 poll. That the 25% of the party that is socialist; the remaining moderate 75% isn’t voting for Bernie and might even be NeverBerners.

October 25, 2020
Jefferson's views about cities were not embraced by the nation for 230 years, but that may be changing. Most of his other views were held sacred, but that, sadly, is also changing. Time will soon tell which ones prevail.
View Comments (3) | Add Comment

October 22, 2020
Illinois' wealthy don’t need defending. They know how to take care of themselves just fine. But don’t assume that a tax hike on them will be a free lunch for the rest of us. If too many wealthy leave, our reform-shunning legislature will only have one place to make up for the loss in tax revenues: Illinois' middle-income earners.
View Comments (16) | Add Comment