Supporters of the effort to attract Amazon’s second headquarters to Chicago should pay attention to a recent credit rating decision by Moody’s Investors Services.

The agency recently downgraded Wisconsin’s Racine County over its plan to issue debt as part of its scheme to offer Foxconn financial incentives to support the company’s $10 billion investment in Wisconsin. Moody’s cited the county’s increased overlapping debt burden as a result of the debt issuances.

The downgrade decision matters because Moody’s knows a thing or two about the overlapping debt that Chicagoans face. Moodys has already rated the city of Chicago and CPS debt as junk.

More debt to fund Amazon’s investment would only make things worse for the Windy City and its residents.

Overlapping local government debt for Chicagoans – that from the city, its sister governments and the city’s proportional share of Cook County debts – now totals $71 billion. 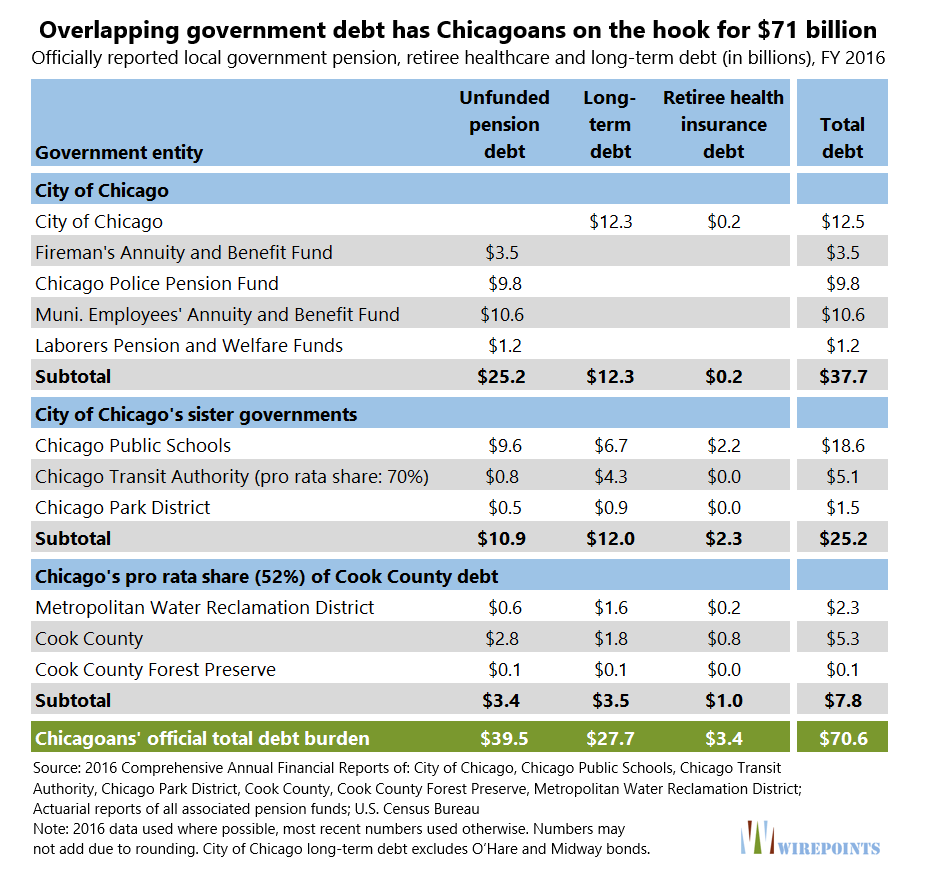 Collectively, that means each of 1.05 million Chicago households will have to hand over, on average, more than $67,000 in future taxes and fees to pay down the debt. Under more realistic budgeting requirements from the Governmental Accounting Standards Board (GASB), that amount grows to $82,000 per household.

Don’t think those additional taxpayer funds will go toward new roads, better schools or safer streets. The majority will go to pay for services provided long ago and toward the city’s old debts.

No room for downgrades

Moody’s downgraded Racine County’s rating by one notch to Aa2 from Aa1, still well within the investment grade range. According to Moody’s:

“The rating action came as Racine County expects to sell $79.2 million of taxable bond anticipation notes to finance land purchases for the project.

Mount Pleasant, the site of the plant, also plans to sell up to $113 million of bonds for Foxconn, in a move that will increase the county’s overlapping debt burden.

According to Crain’s, included in Illinois’ offer to Amazon “…is more than $400 million in infrastructure spending by the state and city for the eight city and two suburban sites offered, some of which are undeveloped and need things such as sewers and roads and others that would need new Chicago Transit Authority and/or Metra stops.”

It’s not clear if and how much debt the city or Cook County might incur to prepare any infrastructure for Amazon. But what is clear is that Chicago has no more room for additional credit downgrades.

Apologists for Chicago borrowing may argue that the rating agencies will value the benefits of Amazon over the negatives of any debt.

But the downgrade of Racine County serves as a point of caution. The county is investment grade and Foxconn is committed to bringing jobs and long-term growth. And yet, Moody’s still made the decision to downgrade.

Chicago, Cook County and Illinois are in a much deeper hole than any place in Wisconsin.

It is too easy to indebt taxpayers for deals of this magnitude.

They should be subject to voter referendum.

Side story I just saw on Karl Denninger’s market-ticker.org (He ran a tech co in Chicago 15 yrs ago, since then has lived in panhandle of FL) ” Then there’s Chicago and Goldman’s latest fraud, and what a doozey that one is.  The City, which incidentally is basically bankrupt and has insane pension liabilities, created a “new” corporation, assigned it alleged “preference” for sales tax revenues, and then had it issue bonds in order to game the ratings.  The result?  A “AAA” rated bond issue for a bankrupt municipality.  May I remind you that if you tried this you’d be tossed in prison for 30… Read more »

Agreed, but Wisconsin has the luxury of having all kinds of tax revenue floating around. Would be better to lower everyone’s taxes, but this is a sort-of measured risk, especially when compared to Illinois’ last ditch gamble.