If you want to understand the depth of Illinois’ pension crisis, you’ll need to know a few numbers to see just how deep that crisis truly is.

These few numbers can also explain why the state urgently needs to amend its constitutional pension protection clause and begin preparing for some measure of bankruptcy.

Without those changes, it’s highly unlikely Illinois will be able to dig itself out of the hole it’s in.

Let’s start with the rosy scenario.

The first number you’ll need to know is $550 billion.

That’s the total amount state workers are owed in pension benefits over the next 30 years. In other words, that’s the amount taxpayers are on the hook for in future pension checks the state should have on hand – right now – to pay out those already earned benefits in the future. 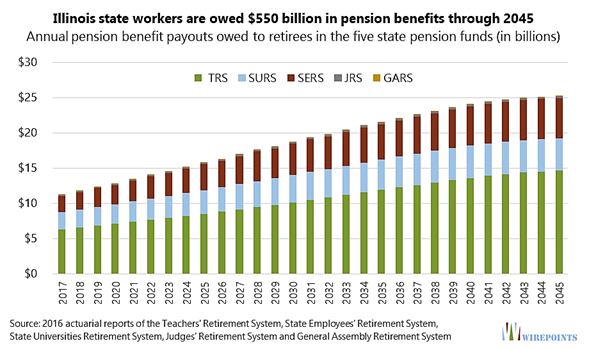 That number captures all the things that go into calculating a state worker’s pension, from the number of years worked to three-percent compounded cost-of-living adjustments to a worker’s final salary.

The second number you need to know is $208 billion. That’s the amount actuaries say the state should have on hand – right now – to pay out those already earned benefits in the future.

If invested properly, the $208 billion is supposed to grow enough over time to cover the cost of the $550 billion owed to pensioners.

The problem is, the state doesn’t have that $208 billion on hand. Instead, the five state pension funds collectively have only $78 billion set aside.

That means the state’s pension funds are officially short $130 billion, which is the third number you should know.

That pension shortfall is wreaking havoc on the state’s budget. Skyrocketing pension costs are eating into funding for core services like education, social services and health care. 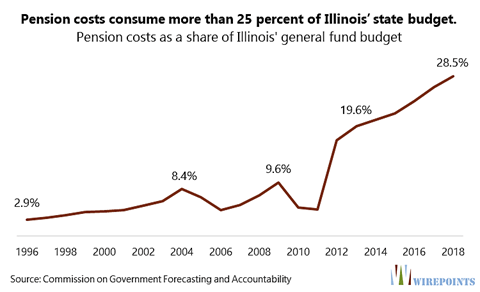 By comparison, pension costs on average only consume 4 percent of the budgets in other states across the nation.

But numbers for the state, and for Illinoisans, get much worse when there’s a more true accounting of what taxpayers are really on the hook for.

Some institutions like Moody’s Investors Service believe the actuarial assumptions used to reach the $130 billion pension debt figure are far too rosy.

Moody’s believes the state pension funds are overly optimistic in their investment assumptions. If the state’s investment expectations don’t pan out as planned over the next three decades, the pension shortfall will be much larger. 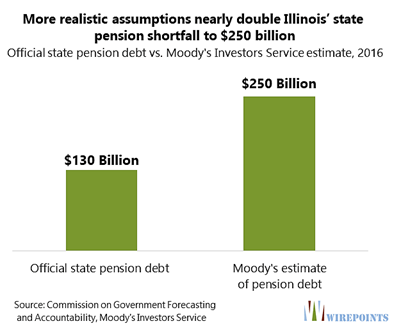 The fifth number you should know is the total pension shortfall of Illinois’ many local governments that residents are also on the hook for. That includes pensions for municipal workers, police officers and firefighters in Chicago and across the state. More than 600 different pension funds manage those workers retirement obligations.

In total, Illinoisans are on the hook for another $57 billion in local pension fund shortfalls.

Illinoisans are also stuck with an obligation that’s rarely talked about but equally problematic: health insurance for retired public-sector workers. For example, the state offers free health insurance to retirees in exchange for just 20 years of service.

The state actuaries say the state of Illinois should have $57 billion set aside today in order to meet those obligations for state workers, teachers and college employees.

Unfortunately, the state has nothing set aside to pay for those benefits. Zero. That means the state’s yearly retiree health insurance obligations are on a pay-as-you-go basis, which puts an even greater strain on the budget.

Add up all the shortfalls related to public sector retirement benefits across all governments and you get a grand total of anywhere between $270 billion and $400 billion (depending on assumptions). 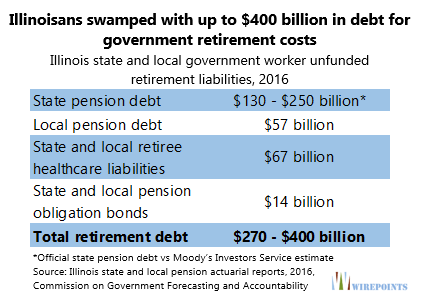 That’s some $56,000 to $85,000 of debt for each and every household in Illinois. And those estimates ignore the impact of an inevitable recession and/or a stock market correction that would make things far worse.

Anyway you look at it, those numbers are too devastating for taxpayers to afford and too overwhelming for lawmakers to tackle on a piecemeal basis.

Illinois lawmakers have a choice. They can continue to do nothing and watch the state’s finances and its tax base deteriorate until the state becomes insolvent.

Or it can pave the way for constitutional changes to pensions and a path to the reorganization of the state’s debts. Wiping the slate clean, done in conjunction with major spending reforms, means Illinois could get back on a path to prosperity.

One path requires hard decisions now, but it’s far better than the alternative.

According to the first chart in this article, the annual amount of benefit payments will approximately double over the next 28 years, which represents a compound annual growth rate of less than 3%. This is considerably less than the expected rate of growth in nominal GDP, and even this low growth rate will decrease further beyond 2045 due to the less generous benefits provided to new employees hired after 2011 under tier 2. Where’s the crisis? And if these projections are indicative of a crisis, then what about Social Security, which has a lower funded ratio, and probably an even… Read more »

There was a time that Wall Street would not bailout cities and states “lending” them money in the form of more loans and municipal bonding until they got their respective houses in order. They did that to NYC in the 70’s when it was on the brink of insolvency. That no longer applies as WS speculators are willing to take the risk of default on the high interest rates charged. Until or unless we return to saner policies IL will be allowed to dig an even deeper hole. Cripes, Moody’s just gave the Tiny Dancer of Chicago a triple A… Read more »

Vote Up0Vote Down
T B

Move everyone to Social Security

The last negotiation session between the Governor and democrats to address the pension problem was fruitless. The democrats wanted nothing to do in turns of changing the pension system. They only wanted to TAX and TAX more. The system will not be fixed short of knowing that the democrats have run out of ways to TAX. The state will eventually file for bankruptcy and that will be it. And everyone knows it!!

Isn’t it time for the Federal Government to pass a law giving the states the option to reform their pension obligations without the restrictions imposed by their state constitutions? Seems this should have been done years ago.

Frank, the Congress has expressed no appetite for bailouts. This likely crosses party lines; even democrat Senators and Representatives from well-funded blue states should be disinclined to spend federal tax dollars on the underfunded plans.

Vote Up0Vote Down
Bob Out of Here

That’s not a bailout. You won’t get anywhere asking states that have positive cash flows to help IL out. But I don’t see why they’d object to letting the state void its pension debts.

Isn’t it time for the Federal Government to step in and provide Illinois and other states the option to reform their pension obligations without the restrictions imposed by state constitutions?

what happens when anyone that is left in the state just doesn’t pay? civil disobedience.

Just speculating, but IMO the Illinois political forces will savage the taxpayers severely. No consideration for the civilians. Prepare accordingly.

Ted, what happens if the Dems continue to make things worse each year by keeping the status quo? That is, does even more creditiors/pensioners get wiped out than if they restructured today?

Each day this problem goes unaddressed only deepens the pain to come, for both pensioners and taxpayers.

The taxpayer pain has limits, people can cut their losses and leave.

Doug. You are right. Not only does the economy get hurt by the status quo, but also the tax base. People and companies are leaving, making the situation worse for those who stay. I’m the end, it’s a death spiral. Here are the outmigration since 2000. They are ugly.