The Illinois Senate Wednesday passed a package of tax bills tweaking Governor Pritzker’s graduated tax proposal. They already bumped the rates up a bit from Pritzker’s proposal, but what’s more notable is the shamelessness of the gimmickry they added.

For starters, they must have figured that, since they were already playing the $.95 pricing psychology, they might as well make it $.99. They raised the top income tax rate to 7.99% from Pritzker’s 7.95%. For single filers, the new maximum rate rate would kick in at $750,000 and apply to all income. That’s $250,000 lower than under Prtizker’s plan. For joint filers, that top rate would kick in at $1 million, as in the governor’s plan, and again covers all income.

The corporate tax rate would be raised to 7.99%, a bit higher than Pritzker’s 7.95%. The current rate is 7% but corporations also pay a replacement tax that makes the top corporate rate 10.49% under the Senate plan.

The big sweetener trumpeted by Senate proponents, which they added, is a property tax freeze. Property taxes, they know, are what make Illinoisans most livid.

But the freeze is phony:

•  First, the freeze applies only to school property taxes. While schools represent the bulk of those bills, left out are all the other items you see on your property tax bill, including those for your city or town, park district, county and more.

•  Second, it’s entirely contingent on the state living up to funding promises under the new school funding formula and for “mandated categoricals.” But that will never happen because the cost would be impossibly huge. The funding formula was designed that way so that schools could perpetually claim underfunding. Meeting this condition required to trigger the freeze would take an additional $650 million each year for ten years.The Center for Tax and Budget Accountability, which was given a central role drafting the new formula and is very friendly towards bill supporters, says we are already over $7 billion short of full funding under that formula. In other words, the condition needed to trigger the freeze almost certainly wouldn’t be met, and if it did it would be at the mercy of each year’s budget.

•  Third, the freeze would still allow for increases to pay pensions and debt service.

The Senate legislation, like Pritzker’s proposal, includes repeal of the estate tax. But that’s long overdue and nobody in either party could seriously defend keeping it. Estate taxes at the state level are irrational, driving out the wealthy who can flee, leaving only large farmers and others with real ties to the state to pay it. Revenue is minimal — less than one percent of the budget — about $300 million.

But that didn’t stop the likes of Senate President John Cullerton from trying to spin things his way. He reportedly laughed out loud at Republicans who all voted against the repeal of the estate tax. In truth, those opponents were voting against the whole package, all of which is contingent on the other pieces. Naturally, a voice in the press friendly to Cullerton, Politico, went along with Cullerton’s spin, calling it “role reversal.” 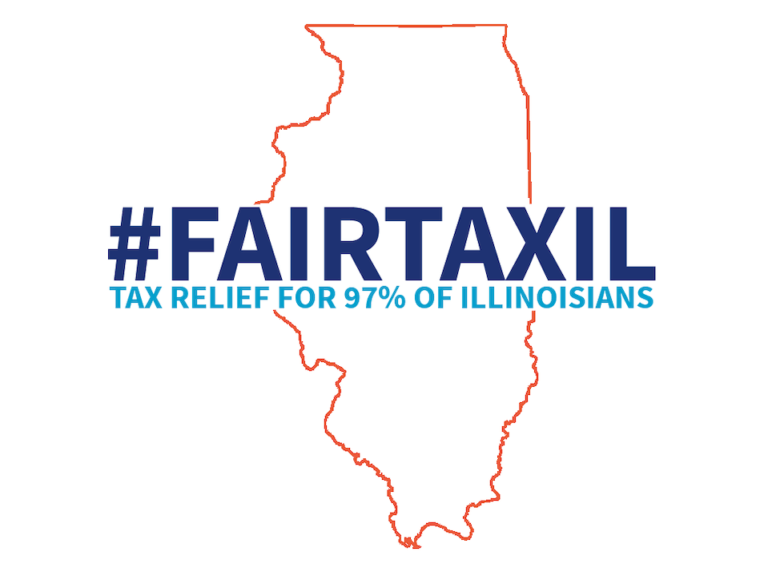 The primary argument made by graduated income tax supporters remains fairness – making the rich pay more and giving the rest a break. However, the tax relief for the middle class is paltry. For every $1 of tax relief that will be spread among the bottom 97%, $21 of tax increase will be paid by the top 3%. Those are Pritzker’s own numbers.

So, why not just call this for what it really is – a tax hike on the wealthy? Many Illinoisans may be fine with that.

But we think most Illinoisans will figure this out for themselves, and it won’t take long. They will see this as yet another tax increase with no reforms. They will see quickly that it accomplished little, leaving our fiscal crisis out of control, and they will know they are in line for the next tax hit. They will watch this tax increase backfire in the long run by driving more taxpayers off.

Only a long list of drastic reforms like we’ve long advocated here will restore the confidence essential to stabilizing Illinois.

*Mark Glennon is Founder of Wirepoints.

I would suggest that the arguments need to be simplified if you want voters to pay attention. A fine article, but above the average voters understanding or interest. And voters are the problem, as they keep electing these idiots.

Can someone explain something to me ? How is it that tax increases can be allowed without voter approval ? Seems like they never do what they are sent down there to do. Its always their own agenda. And a Democratic confiscatory agenda at that. Never a peep about austerity or real fixes.

Perhaps a bigger question is incurring debt without approval. That was supposed to be covered by a 3/5 voting requirement in legislature for all bond issues and by the balanced budget requirement. They skirted that for pensions and healthcare, running up roughly 5X more debt there than bonds issued.

when taxpayers finally are imbued with the courage to starting whipping back, instead of allowing the unrelenting whipping they will simply reduce the amount they pay. All it will take, and I say all, as if it is simple, is because it is. Just a grassroots movement that has some agreed upon amount, such as, “We will give you” the same amount as 2000, or 1994, whatever is agreed. When the people have had enough, as we have, grassroots as enormous power. It is like that dimdem, from Alabama, who said yesterday about abortion, kill’em now or kill’em later (wow)-our… Read more »

My concern is if the voters do not approve the graduated tax what is the Democrats Plan B. There is ALWAYS a plan B.. Would it be a 1% tax on all property? Taxing private retirement plans to pay for the public pensions? Raising taxes on high cholesterol levels and BP? How many taxes could then be implemented without voter approval? Remember in the Addams Family Values movie “Be afraid, be very afraid”

Madigan needs to get out.

won’t make any difference at this point.

3
The problem is corruption in Illinois as part of i

The problem is corruption in Illinois as part of it there’s no consequences to the people who create the corruption to term limits no benefits that need to help happen with all politicians.

1) Exempting pensions and debt service from the property tax freeze is a huge red flag, especially if/when the state shifts pension costs to the school districts.
2) The tax brackets in the original proposal applied to both married and single filers. Folks complained that penalized joint filers, but instead of doubling those brackets for joint filers (like changing the 7.75% bracket from $250-500K to $500-1,000K), they lowered the single filers bracket thresholds. In other words, single filers in the higher brackets will now pay more instead of joint filers paying less.

Good examples, nixit. The problem is that our legislature does not fear their voters. After watching the catastrophe that was the last four years–where they obstructed everything Rauner tried to do–they were probably shocked that the voters simply turned around and gave them all supermajorities in both chambers and threw out the governor. “Wow” they said, “we can pretty much do anything around here, as long as we blame the other side.” And that is exactly what is happening. That’s why John Cullerton is openly laughing. They know that their voters are deeply partisan to the democrat party, or have… Read more »

Exactly. It’s like they said, “Oh, there’s a penalty for being married? We’ll just raise the tax on single folks to make it even. Problem solved.”