“We’ve reached a critical juncture for our own state finances,” said Governor JB Pritzker said in September about the state’s finances.

Say, haven’t we heard that “critical juncture” thing before?

Why, yes, you have (if you’ve been a Wirepoints reader).

In 2014, S&P, which rates the state’s credit, said Illinois was at a critical juncture.

This was our comment at the time: “‘Critical Juncture’? Hell, we were at that 15 years ago. That’s the same vacuous phrase Quinn used in his State of the State address two years ago.”

But Governor Pat Quinn at least stated the alternatives correctly in that State-of-the-State speech. Fix pensions or else, he said:

This is a choice about whether we will make the tough decisions necessary to balance our budget by reforming our public pension systems or whether we will let our jobs, our safety and our schools be squeezed out by skyrocketing pension costs.

Backwards we’ve gone since then. No pension reform, and Pritzker refuses even to discuss it.

The result? Since Quinn said that the state’s unfunded pension liability has jumped about 40%. Thanks largely to pension problems, the state hasn’t truly balanced its budget since 2001. We’ve been ranked the least tax-friendly state in the U.S., had straight years of population loss, etc.

Will we once again ignore our latest critical juncture or paper it over with cosmetics and can-kicks? Maybe, and deeper into the abyss we will go.

This article was updated to correct the first paragraph which earlier said that Pritzker’s comments were on Wednesday, not earlier.

Well, since we are getting all retro here today, I reminisce about my favorite state mascot, Squeezy the Pension Python.

I believe that he ate Oblivious the Ostrich, but I’ve not since seen any further advancement of Squeezy’s cause.

If nothing, I wonder if Pritzker has been near Squeezy’s tank lately. 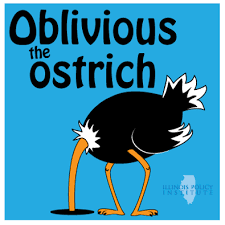 You will never get pension reform with the current Illinois GOP leadership. They are just as beholden to the state employee franchise as the Dems.

Seriously wonder if GOP would even want to be in charge at this point. Wouldn’t they be better off waiting until everything hits rock bottom and public is begging for an alternative to the Dems? Best strategy for now is sit back and wait.

Pritzker and Madigan’s arrogance has prevented even modest efforts to mitigate the fiscal problems outside of raising taxes.

When it comes to Illinois, you can’t fix stupid and corrupt.

Of course, “deeper into the abyss we will go”. The group that led us to this point are still in charge.

Freddy – good article indeed. The crew over at Capitol Fax, however, would take one look at its author and dismiss the article because of its author – never mind how persuasive or accurate Shuster’s points happen to be. I just told my brother, a leading Phd economist and investor, about Capitol Fax and its merry crew of commenters. Needless to say, my brother’s take on public finance is deep, and let’s say, quite a bit more compelling than that Oswego guy. I warned him to be very subtle in his comments, because his typical speak to reality (he is… Read more »

Had lunch with a gentlemen who is expert at municipal finances. He worked for JP in NYC, then SF. Says IL only has a couple of days of cash. Chicago is slightly better off, and has assets it can sell. The state however, is gone.

One African American who won’t be featured in revised 1619 history classes is Kevin Orr, who managed the Detroit bankruptcy. 2014 was indeed a critical juncture year because that’s when GASB68 started requiring states, cities and schools to report their unfunded pensions on balance sheets. Their response was to keep driving toward the cliff.

Life has a funny way of repeating itself.

ABOUT US
© Wirepoints Corp. 2012 - 2020. All rights reserved.
Contact us: admin@wirepoints.org
FOLLOW US
wpDiscuz
13
0
Would love your thoughts, please comment.x
()
x
| Reply