Illinois is now being inundated with ads, social media and op-eds urging a yes vote for the Fair Tax by making the following claim over and over again:

“If Illinois passes the Fair Tax 97% of Illinoisans will pay the same or less in taxes. Only people making above $250,000 will pay more.”

No. There is nothing about rates in what you will vote on. Springfield would be free to increase rates at any time on any income group if the measure passes.

Decide what you want about the “Fair Tax” ballot initiative in November’s election, but is it too much to ask for an honest debate?

The ballot initiative only asks whether the Illinois General Assembly and governor should get unrestricted authority to set different rates for different income groups. Today, a single rate is required for all taxpayers.

Springfield has already set what would be the initial rates at the levels claimed above, but if Illinois votes yes Springfield would be free to change those rates on day one and as often as it wants, for as many different income groups as it wants.

One example of the deceitful ads is linked here. It’s being run by the Vote Yes For Fairness committee, into which Governor JB Pritzker has already poured over $56 million. Similar claims are appearing constantly.

It’s particularly maddening to see the deceitful claim made in a mailing sent by the state itself, at taxpayer expense, apparently to all voters, from the Secretary of State. It contains arguments for and against the proposal including a rebuttal about the rates, but the arguments in favor repeat the misleading claim twice. The relevant pages are reproduced below.

Wirepoints will continue to publish both sides of the debate, but make no mistake: A yes vote would not assure the rates being claimed. 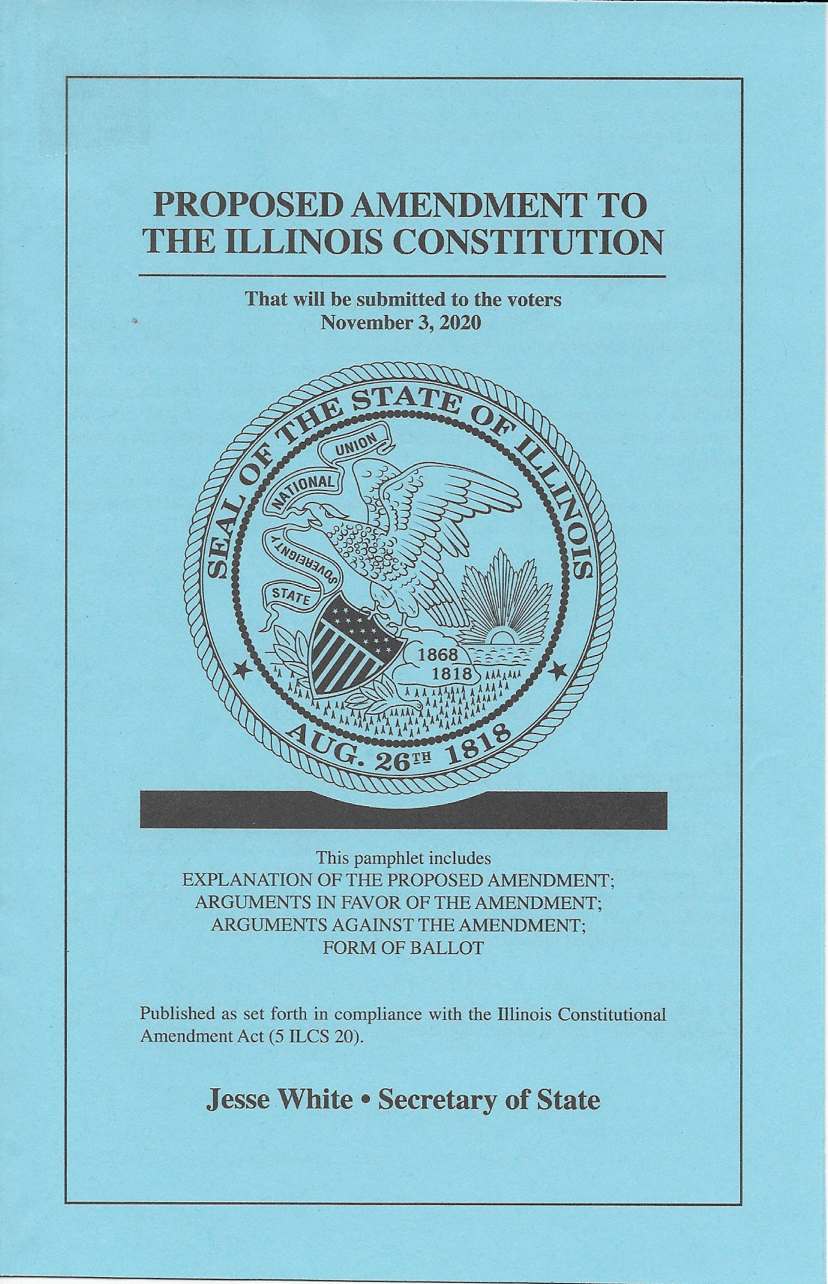 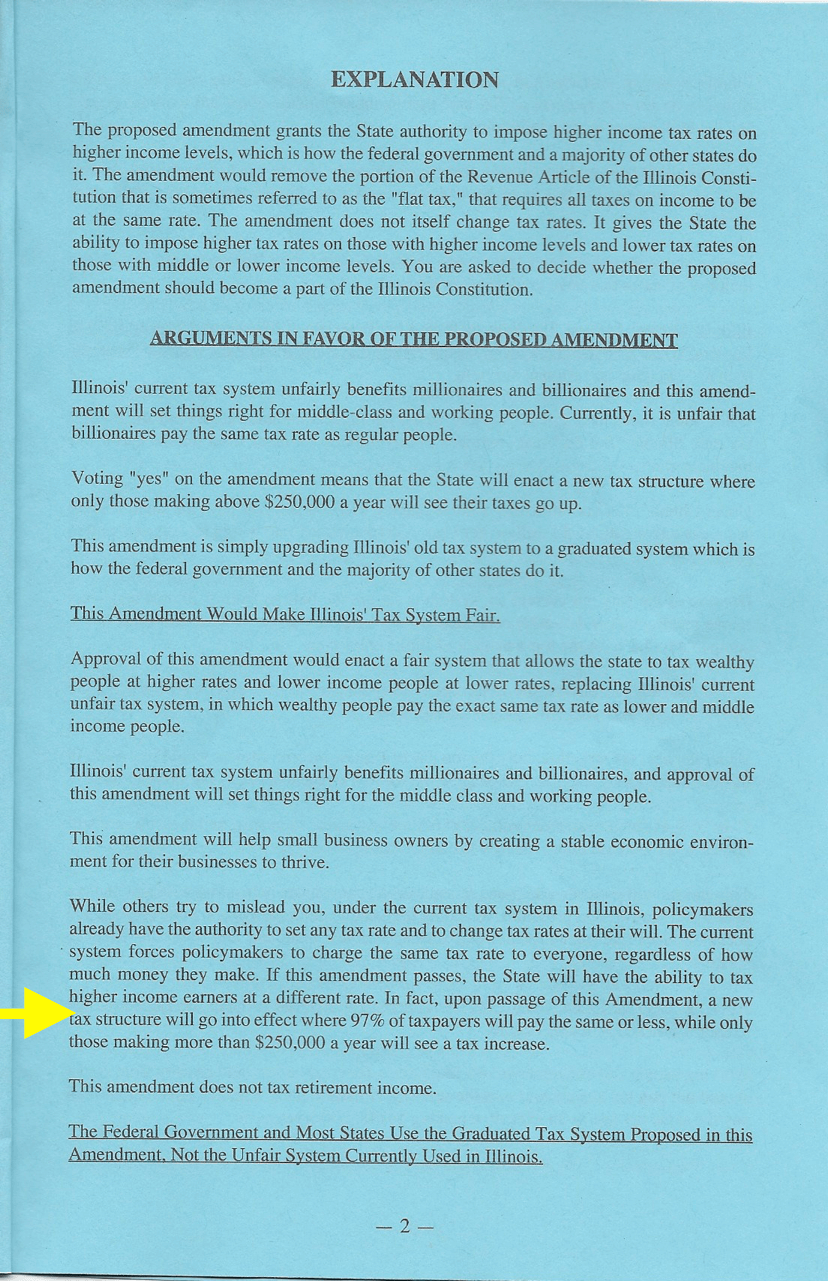 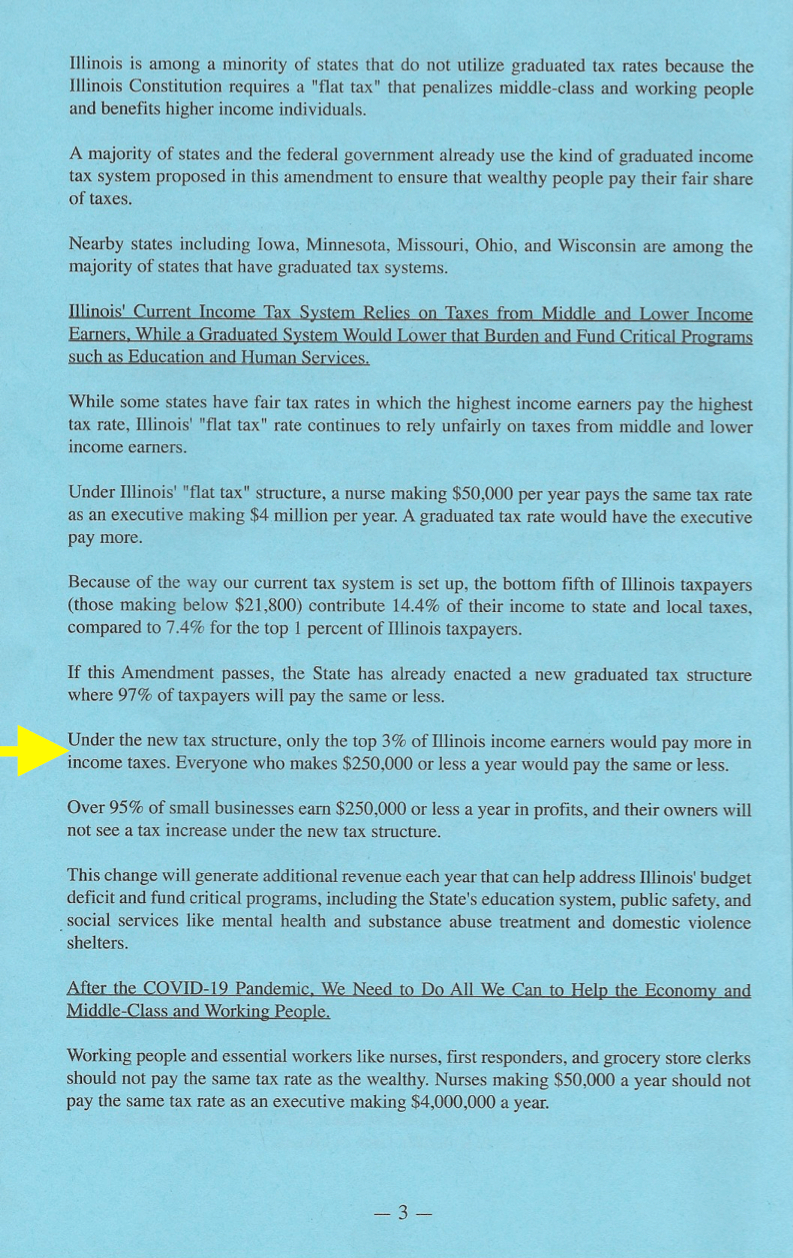 For reference there are 18 billionaires in Illinois. 6 of them are Pritzker’s. We lost one: Bruce Rauner now lives in Florida. There are 280,265 millionaire households in IL. That’s one out of every 18 households. You don’t need a large taxable income to be a millionaire.

Illinois’ income tax was 0% until 1969, then it was implemented at 2.5%. IL spends all it can get and more. Funny how we can vote on tax “reform” and not on pension reform and term limits.

Do Not Tax the HUGE PENSIONS of Cops, teachers and Firemen. They are my hero’s.
They have figured out how to steal money from the unborn children of Illinois.

I just can’t get over the claim our flat rate tax system isn’t “fair.” It was fair until they (the politicians) drove our economy into the ground. Now they’re desperate for money so they label this grab for money from higher earning taxpayers “fair.” Higher income earners already pay their fair share with a flat tax. Don’t these foolish (or crooked) politicians realize how much more in taxes wealthy people already pay? By all means, now let’s drive them from the state so we get no tax money from them at all.

Agree. All of the articles supporting the flat tax conveniently disregard our property taxes, sales taxes, and other ridiculous grabs of money in licensing fees, tolls, and the like. Way past time to start making constitutional amendments on pension reform and term limits. Amazing how union membership has dwindled nationwide, but somehow still rules Illinois. Pritzker really thinks Illinoisans are that dumb, and until voters REALLY demand change and vote these clowns out of office, Illinois residents will continue to complain about taxes and see companies leave the state. The lockdown proved alot of companies don’t have to be in… Read more »

If it was really a fair tax proposal the Democrats would not be pushing for it so hard.

“Fair,” like beauty, is in the eye of the beholder. Most who likes progressive taxation do so because they want someone else to pay government’s bills and do so at a higher rate than they do. The wealthy by definition have more money, certainly more discretionary money and ought to pay more taxes, they argue. “It’s only fair.” But, if you look it as a wealthier person is apt to do you see it very differently, basically “adding insult to injury.” Even with a flat tax the wealthier person pays more for many (most?) government services. In the local area… Read more »

Someone has to pay for Million Dollar Pensions.
Screw the Illinois Taxpayers say teachers, cops and firemen, I moving to Florida to live in a luxury home.

I also believe that the “Fair Tax Proposal” is anything but fair. Misuse of taxpayer funds at the politicians hands has led us to this dilemma in Illinois. Many other states are not far behind but before we give Illinois politicians one more way to extract money from hard working Illinoisans I believe they need to clean up there act and manage the state within the money that Illinois receives. Who remembers “Better our schools using lottery money”, and then although monies were put into the school funding our dishonest politicians removed monies that were already going to the schools… Read more »

The proposed constitutional amendment opens the door to tax retirement income. Now it is politically unwise to propose to tax retirement income at the 4.95% rate. With the “fair tax,” retirement income could initially be taxed at a much lower rate, which could then be increased over time. Note that there are presently nine states that have no income tax, nine states have a flat income tax, and 32 have a variable rate income tax. Also note that the proposed “fair tax” rates apply to the total income, they are not bracketed like the federal rates and there is no… Read more »

You should vote no. I left IL in May but I still have families there.

Vote NO !!! Nothing “fair”about Illinois politicians.

Considering that the person pushing for this is the same one that used the law to reduce the amount of property tax he paid. I wouldn’t trust that he wants something to make him pay more in taxes.
If the legislature really wants to increase the amount of money received from Income Taxes, get rid of all the tax dodges, loopholes on income, and other ways the rich hide their income.

Like Pritzkers, who have their money in the Bahamas and Texas.

I’m surprised this hasn’t gotten more play. I thought the wording that there can only be “one tax on income” was removed either from the legislation or constitutional amendment. This is a pretty big deal.

The “Progressive Tax”, tax the rich ploy is a flat out lie and a purposeful distraction. That language is not in the IL constitutional amendment. Pritzker and the Democrats are pushing this fairy tale because who doesn’t want to tax the rich? Who doesn’t want someone else to pay their taxes for them? But that is NOT the amendment. So, right from the start IL Democrats are lying to you. How can you trust them beyond that? They will also be able to tax your income multiple times. For instance lets say you have rental properties in Chicago. You could… Read more »

Please vote No on this “fair” tax. It’s only fair to the politicians who created it. The wording in the tax allows them to increase the rates without any further voting. Even on the lower middle class. VOTE NO.

We already have a progressive tax on homes but not income. The more your home is worth the more you pay in tax’s for the exact same services in your area as someone with a lower price home or property. Same police/schools/parks/fire/etc but at a higher cost. Last I checked there is no net worth or asset in Illinois yet most people’s largest asset is their home. Many questions. How many people lost their homes due to the the inability to pay property tax’s? What happened to the property task force? Did they disband but they are still getting paid?… Read more »

Jb thinks he’s buying reelection and possibly election to higher national office with his $56 mil backing of fair tax ( who knows if its from his families tax free off-shore account’s?), its chump change for him. While conveniently the public sect unions have not put a $dime$ towards fair tax campaign but will be by far main beneficiaries of increased tax revenue, instead they fund all the “friends of madigan” campain funds with union dues–they’re all the same ‘where’s mine’ people. Low, moderate, middle, upper income–it dosen’t matter, your just pawns to be used & lied to by the… Read more »

JB will move to his farm in Racine after he makes Illinois even more unaffordable and vacation in lake geneva. He wasn’t willing to pay Chicago real estate so he protested and saved $100000s. He also hides his wealth overseas and blames it on his dad. Judt trust us one more time. Sure!

The world lives successfully ONLY on TRUST. Why would we trust Illinois politicians with a long history of criminal behavior and a governor with a history of tax cheating? The fiscal mess this state is in is living proof our “legislators” are incompetent, they are simply politicians collecting a paycheck. NO NO NO NO NO on changing our tax

If Putz wants it, it can NOT be good for our state or whats left of us!
A CONSTITUTIONAL AMENDMENT SHOULD NOT BE PUSHED THROUGH !!

And once they change the Illinois Constitution to allow this we will NEVER be able to repeal it.
DO NOT TRUST ANY OF THESE POLITICIANS OR THE CHICAGO MACHINE. THEY WILL SCREW US ALL AGAIN!!!?!

Jabba has been pushing for this the whole time.
NO NO NO is what should be voted.

Who authored the pro/con arguments that appear on this SOS doc? Wish they gave us a crack at it.

Good question. Nixit, I reached out to the Secretary of State’s press guy on that question. The General Assembly, he said, authored it. I don’t regard them, even those who oppose the referendum, as representative of taxpayer interests.

Nixit, I reached out to the Secretary of State’s press guy on that question. The General Assembly, he said, authored it. I don’t regard them, even those who oppose the referendum, as representative of taxpayer interests.

As it is clearly one-sided, there should be some kind of bi-partisan review rule on such documents. As Mark noted, it’s terrifyingly deceptive in the pander-like written persuasion tactics such as omission, assumption, loaded terminology and general pushing/twisting of “preferred” concepts. Glaringly so if one knows how to spot these.

All you had to say was that JB spent money on it. I would not believe him if he said the sky is blue. 2 no votes here.

The “Fair Tax” does not include the repeal of any loopholes. There is not any legislation proposed by the Pritzker administration for ethics reform, reducing the bureaucracy and properly funding public pensions. The 3% raise public pensioners enjoy is unsustainable. The 7,000 taxing bodies in Illinois are unaffordable. The 850 School districts in Illinois need to be reduced . The University pension system is also unaffordable and needs reform. JB has yet to address these issues as if the “fair Tax” will cure all of Illinois financial troubles.

September 27, 2020
Mark was on with Mike Flannery of Fox 32 Chicago last week discussing why reforms are needed in Illinois, not a progressive income tax.
View Comments (2) | Add Comment

ABOUT US
© Wirepoints Corp. 2012 - 2020. All rights reserved.
Contact us: admin@wirepoints.org
FOLLOW US
wpDiscuz
32
0
Would love your thoughts, please comment.x
()
x
| Reply