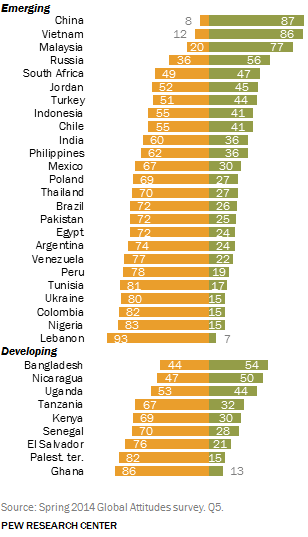 Recent polling says only about 15 % of Illinoisans think the state is “going in the right direction.”

Think about that as you look at the polling for countries on the right, recently done by Pew Research Center.  It’s about as bad as Ukraine, Nigeria and the Palestinian Territory, and worse than Egypt and others. The olive color on the right shows the percentage who said they are satisfied with the way things are going in their nation.

Sadder still, in those places at least they are willing to fight for change, however wrongheaded some of them may be on the ends for which they fight and on violence as their means. Here in Illinois, we’re almost certain again to reelect a House and Senate headed by Mike Madigan and John Cullerton, and roughly 40% of Illinois voters say they will vote for Pat Quinn.

There’s no fight in so many Illinoisans, preferring, instead, to perpetuate the inexcusable.

My generation, baby boomers, stands to be the first to leave Illinois in worse shape than it inherited.  A once-in-a-generation moment of responsibility is upon us all, regardless of party or ideology. The prospect of a failed state is here and only one thing will change that course — fighting to defeat, at the polls, those who have brought us here and who will effect no change.

Stand up and fight.

September 18, 2020
“Other states were prepared for a rainy day and we weren’t. Pritzker has to look at payroll because that’s the biggest part of the expense. The bottom line is that with unemployment so high, with the economy struggling, he’s got to make government more efficient and less costly for the taxpayers.”
View Comments (7) | Add Comment

September 17, 2020
It’s not cases that matter, but hospitalizations and deaths. That’s important because there’s been no real increase in hospitalizations or deaths for three whole months. Cases have tripled since their lows on June 18, yet the average daily death rate has actually fallen from 50 then, to about 19 today.
View Comments (13) | Add Comment