Industries across Illinois have suffered catastrophic job losses due to the state shutdown and COVID-19. Sectors including leisure and hospitality, business services and transportation have all experienced job losses in excess of 100,000 positions.

A key element of Gov. J.B. Pritzker’s initial lockdown strategy in early March was to select which industries were “essential” versus those which would have to shut down. Two months and more than 800,000 lost jobs later, we now know who the biggest losers and winners are.

Workers in Illinois’ leisure and hospitality industry have been the state’s hardest hit according to April data from Illinois’ Department of Employment Security (IDES). The sector has slashed 320,000 jobs, or 52 percent of its workforce, compared to a year ago. “Other services” are down 20 percent, while construction jobs have fallen by 13 percent.

In all, 13 percent of Illinois’ private sector, nonfarm jobs have disappeared. “Decimated” – derived from a Latin term meaning one in ten – is thus an understatement of private sector job losses. The losses will only get worse when May numbers are reported.

State government jobs, meanwhile, are down just 2 percent compared to April 2019. That’s a loss of 3,000 positions. 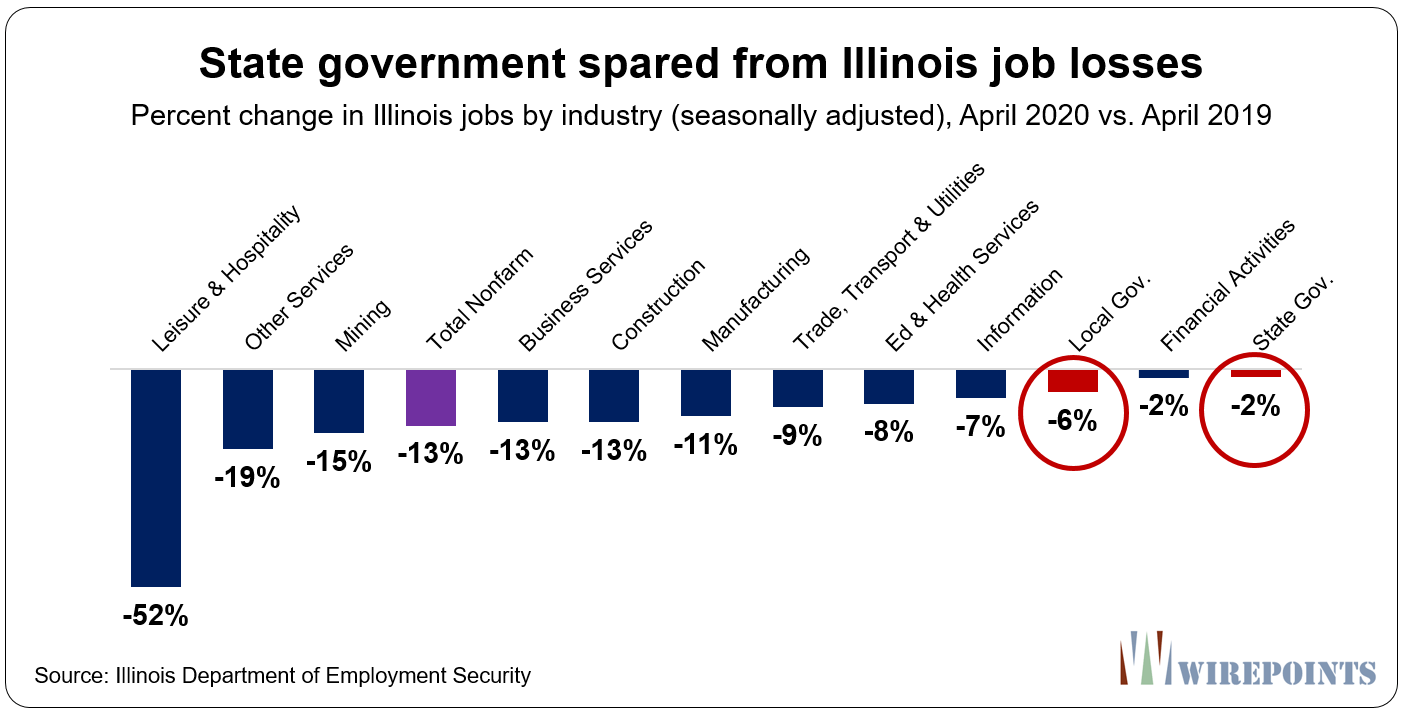 It seems like only municipalities in suburban and downstate Illinois have done any cuts at all. Even so, local government jobs are only down about 6 percent.

It’s clear from the numbers that the public sector is not going through downsizing like the private sector is. Not that government positions should be cut for cutting’s sake. Many of those jobs – police, fire, public health, etc. – are essential to protecting Illinoisans.

The real problem is that the private sector, the one that’s taken all the hits, has to keep paying for the public sector whose jobs and benefits have been protected. Gov. J.B. Pritzker refuses to consider layoffs, furloughs or pay cuts to state workers. Ditto for Chicago Mayor Lori Lightfoot and Cook County President Toni Preckwinkle.

But Illinois’ leaders aren’t just protecting workers from cuts. They’re actually growing public sector pay and benefits in the midst of the worst economic downturn since the Great Depression.

Chicago’s Mayor Lori Lightfoot has been quietly finalizing the $1.5 billion, five-year contract she negotiated with the CTU, which she calls the “most generous” ever granted to the union. CPS employees will see five-year raises of anywhere from 24 to 50 percent, depending on the job.

And at the state level, thousands of AFSCME employees, who are already some of the nation’s highest paid state workers, are scheduled to receive automatic raises in July. They’ll get step increases plus cost-of-living raises worth an additional $260 million as part of the state’s record-spending 2021 budget. Lawmakers passed the budget with a $6 billion deficit with the hope the hole will be filled by federal aid.

Those actions just add insult to injury for the millions of Illinoisans impacted by the shutdown. 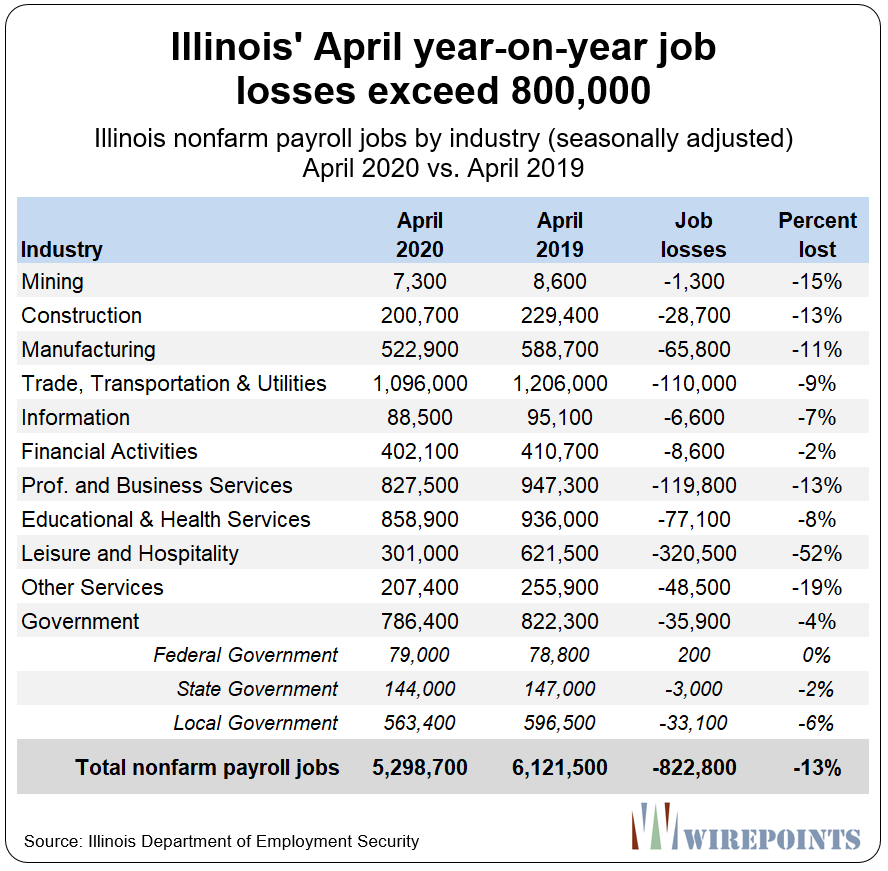 The most frightening issue for the private sector is that 40 percent of lost jobs may never come back. “Our best guess is something like 60 percent of the employment reduction is going to be temporary, and 40 percent is going to be permanent” said Nicholas Bloom, an economics professor at Stanford University and one of the co-authors of a recent study.

The fundamental problem in Illinois has long been that we do not have the jobs and growth to pay for the public sector we created and the promises we have made to it.

Now that shortfall will be even more extreme.

-1
Deep in the Heart

Ted and John are kind to simply call them “promises” without mentioning the union thugs bribery to secure those promised lavish six pensions with annual raises.

The old Chicago adage went that each government job was worth six votes. That is why they are still getting full pay. Like any poorly run organization, even one by the government, eventually financial reality will catch up with them.

Some of these so called essential workers are also getting hazardous duty pay for hours even worked at home.

One of the most serious underlying problems is the fact that afscme employees don’t add tax money to the system, they only recycle tax money provided by outside resources such as myself and all non governmental employees whom they are driving out of existence in this state. They’re killing the golden goose, government employees used to work for us true taxpayers but now we are working for them!

You do not work for them, You are Enslaved by Them. Screw Lincoln, bring back slavery.

Nothing to worry about here folks, no government or union jobs were hurt during the making of this pandemic.
Only self-employed business owners were decimated, who needed them anyhow.

I am a disabled white senior citizen who is a victim of disability discrimination by high ranking members of the city of Chicago who filed a false police report against me intended to harass and intimidate me. The detective actually came to my home unannounced and my place of business. The boa still is investigating. I wrote to the Illinois Department of human rights and their spokesperson, who is in the state payroll, refused to respond to my question stating that he is not able to respond to emails and has limited access. I also wrote to Pritzker press secretary,… Read more »

Nothing will come of it. They are free to screw you over. Shot unarmed Black Men, anything they want to do.

The best thing you can do is MOVE to Florida and enjoy the good life. No Income Taxes and lots of Opportunity.

The shooting of all these unarmed black men is fantasy and is not supported by fact. Brown, Trayvon, Garner got exactly what they deserved. Hands up don’t shoot is a lie and never happened.

The five time felon in MN wasn’t killed by the police officer, the official autopsy said it was intoxicants, stress from the arrest and pre-existing heart disease that all played a factor in his untimely death. It seems clear from the video that the officer used excessive force for no good reason. And he should be fired and punished accordingly. And it’s going to take a lot of science and lawyering to determine to what degree the officer’s excessive force played in bringing about the guy’s death. Maybe 33%, may 99%, let’s do an investigation. But it’s a stretch to… Read more »

The states hiring down at ides with still +540 ides- afscme essential worker heros working from home doing who knows what? And from a couple days ago in one of jbs daily covid spin/breifing, he said the afscme essential heros will be allowed to work from home indefinitely….doing who knows what? No way for public to know how productive any those stay at home heros are, especially w bill passes to block foia’s being answered in timely manner

Heroes my ass, how does Pritzker come up with this crap, heroes my daughter f/f paramedic, my son usaf active duty, youngest gal r/n these are my heroes.

Yet again we can see who truly matters to Illinois government. And if you’re in the private sector, that ain’t you.

Government employees get a raise, Pensions went up 3% annually. They do not pay any State Income taxes on their pensions.

The greed of the cops, teachers and firemen has destroyed the quality of life for the honest hard working taxpayer.

Lots of other states have much more opportunity than Illinois.

The sooner you Kiss Illinois good bye the sooner your life will be on the road to prosperity.

I’m a firm believer in markets and incentives. The reason the politicians running this state don’t respond to articles like this or the reality of our situation is because they are the closest to the market for votes from public sector employees. They have the best information on what works to get votes. If they were told that beating black cats would win votes, JB would be out there beating the s**t out of a black cat at his next press conference. They’ve looked at the numbers, and they know that the winning bet is on the public sector employees… Read more »