Spending more on education is always a political winner. It’s why former Gov. Bruce Rauner boosted state spending on education year after year despite the two-year budget impasse and his dire warnings of the state’s collapsing finances.

Now, it’s the Pritzker administration’s turn to spend more. The Illinois State Board of Education has released its recommended 2021 budget and it wants to increase state appropriations to education by another $760 million, an 8.6 percent increase. That’s on top of the current year’s 6 percent increase and 2019’s 5 percent jump.*

What Illinoisans may not know, however, is that before Rauner even spent a dime, Illinois was already spending more federal, state and local dollars on a per student basis than any other state in the Midwest – and far more than its neighbors.

According to the U.S. Census Bureau’s latest nationwide numbers, Illinois spent a total of $15,337 per student on education in 2017. That’s $5,000 more per student – or 53 percent more – than Indiana spends in total and $3,300 more than Wisconsin, its closest-spending neighbor. It was also 26 percent more than the national average. 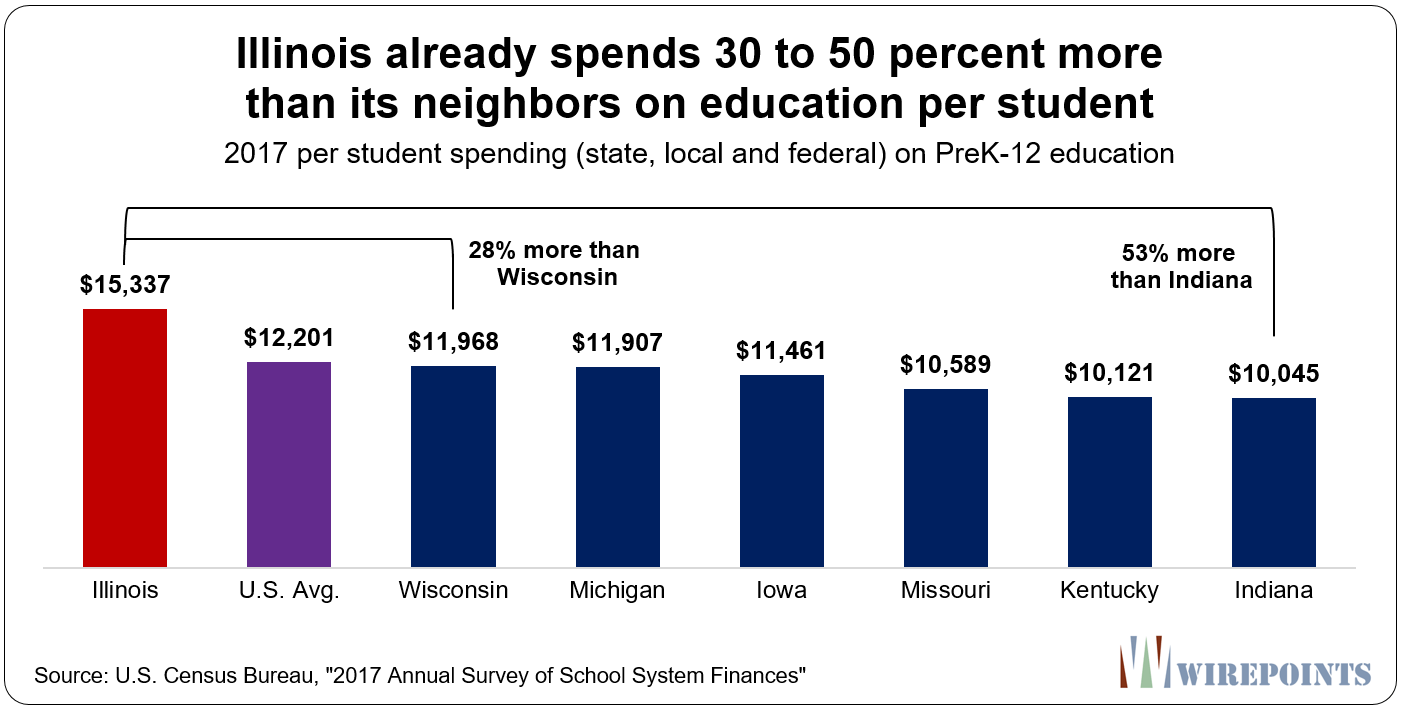 That spending disparity has likely only grown three years and billions in additional spending later.

Illinois’ National Assessment of Educational Progress (NAEP) scores for math and reading have remained essentially flat over the decade, even as total per student spending has grown by over 40 percent. 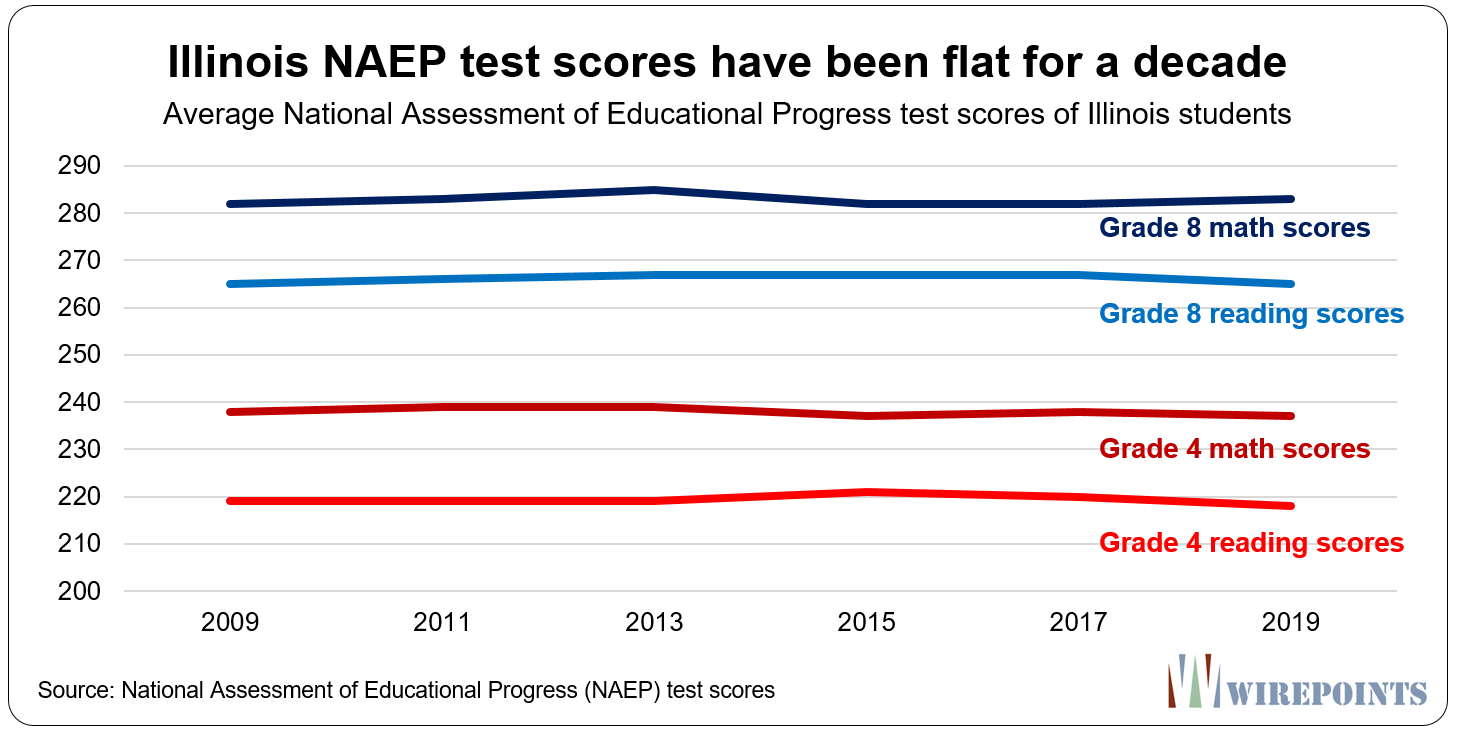 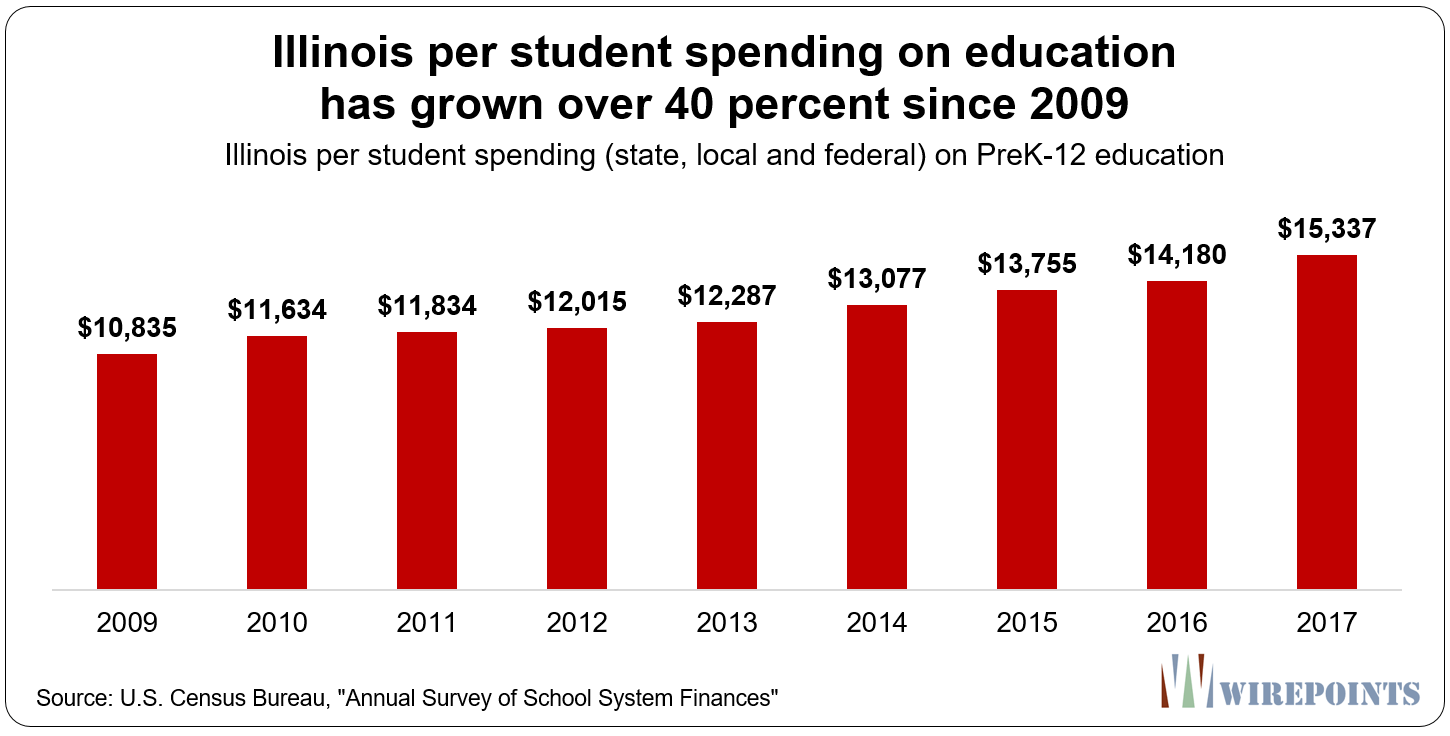 And it’s not as if Illinois scores have plateaued – that all that spending is simply maintaining high test scores that its neighbors haven’t matched.

Quite the opposite, in fact.

Illinois’ NAEP scores are mostly lower when compared to its neighbors. Indiana spends far less than Illinois does, but Indiana’s results are far better across the board. Ditto for Wisconsin. Missouri, Iowa and Kentucky have also largely outperformed Illinois. 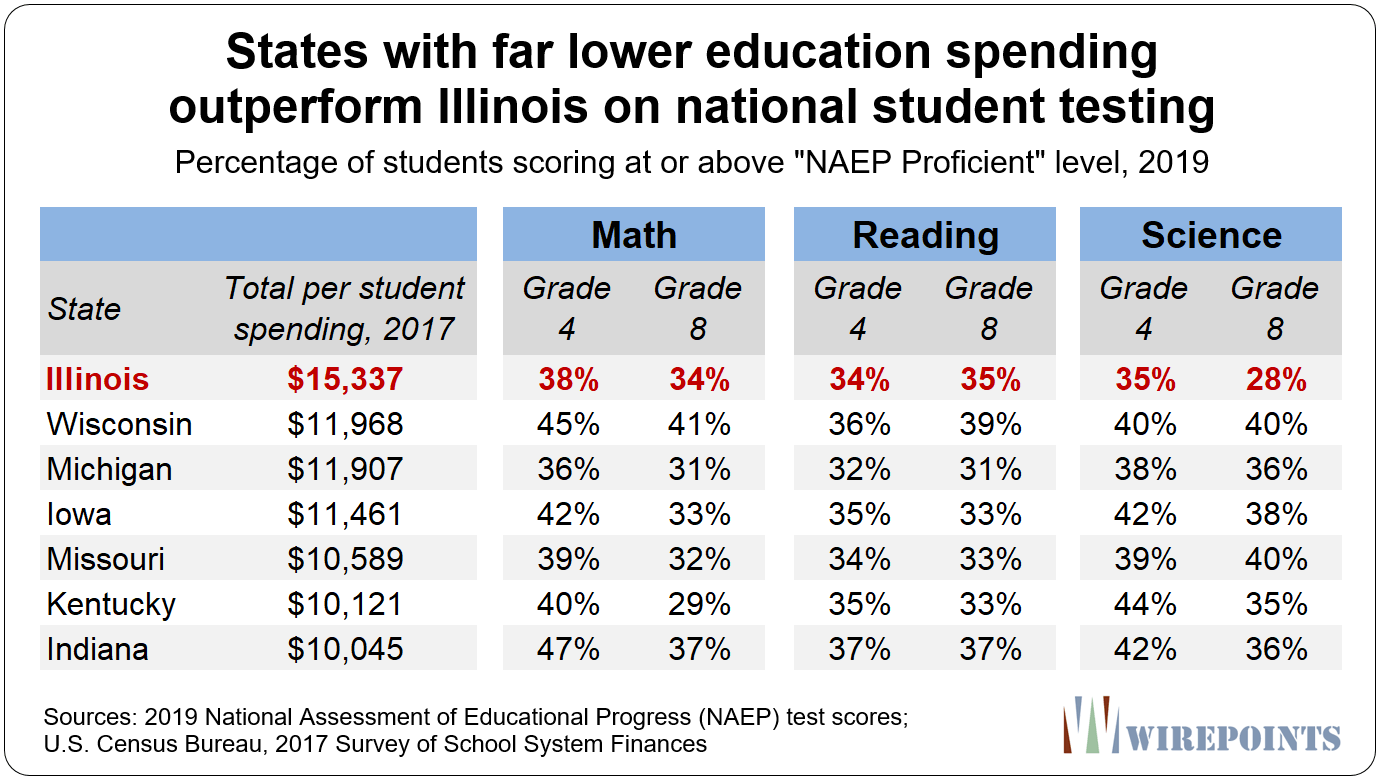 In a nutshell: Illinois spends far more than its neighbors on education and yet its politicians are committed to spending hundreds of millions of dollars more every year. All to achieve student outcomes that haven’t improved in a decade and are, in most cases, worse than in neighboring states.

That’s actually unsurprising, as research has shown for decades that there is little correlation between spending and improved educational outcomes.

But even if there is correlation, as some studies have recently suggested (and still others question), Illinois will still have a hard time improving outcomes. That’s because the state misspends billions in education dollars year after year on its bloated education bureaucracy.

Illinois has far too many school districts, too much executive pay and too many administrators draining money that should be going to classrooms. Too much is also going toward retirements, benefit-boosting perks and the state’s regressive pension funding scheme.

We lay all that out in Administrators over kids: Seven ways Illinois’ education bureaucracy siphons money from classrooms.

Eric Hanushek of the Hoover Institution has written extensively on the issue of poor spending. His research finds that states can’t “just drop in a pile of money and expect good performance to come out,” and that: “We really cannot get around the necessity of focusing on how money is spent on schools.”

That’s as true for Illinois as it is for any state.

Rather than squeeze billions more out of Illinoisans with a progressive tax hike, lawmakers should reform the bloated system already in place: Consolidate school districts, cut back on perks that nobody in the private sector gets, and reform pensions – starting with a pension amendment to the state’s constitution.

A bureaucratic rollback and pension reform is what Illinois needs to redirect billions of dollars back to the classrooms that need it most.

Read more about the need for education reform in Illinois:

Right. Because the public education system in Illinois is not about educating children but about employing “Teachers” and paying them exorbitant sums, pensions and benefits in exchange for teachers unions “contributing” millions of dollars (bribes) to their criminal co-conspirator Democrat politicians and providing boots-on-the ground at election time. The Democrat politicians repay their criminal co-conspirators with shorter workdays, more pay, no merit measurements and more lucrative pensions and then hand the bill to the hardworking beleaguered taxpayers. Rinse. Lather. Repeat. Until teachers unions like CTU and IFT are made illegal in Illinois, education and the taxpayers will ALWAYS be in… Read more »

Check out John Stossel “Stupid in America 5-6-12 (that’s the air date) on youtube about 40 minutes long. He has a few different segments on public education.

The Reason you feel like you are being SCREWED, is because you are.
Call a mover ASAP. Get out of Illinois and let the greedy teachers pay the taxes.
80 and sunny in South Florida, Zero Income Taxes. Some great schools, much better quality of life.

I’d be very interested in knowing what the money is being spent ON. And how teachers are rated. Also, are minority ESL students nursed along in their native languages, or are they immersed in English from day 1 ? And if the latter, are there skilled teachers for doing so?

Ted & John—fantastic writing. Dumb question, what % of Illinois $15,337 per student spending figure goes to pension & OPEB payments? Any way to compare what % other neighboring states contribute to pensions &OPEB payments? And I assume if full accrual /actuarial based payments and/ or astronomical debt were figured for Illinois pensions & OPEB’s the per student $ figure would be thru the roof/ in outer space, especially when compared to Wisconsin’s 100% fully funded benefits for example.

They hope that the kids do not get educated. If they get educated the first thing they do is MOVE OUT OF ILLINOIS as fast as they can. Only a U-Haul will solve your problems. Best day of you life is when you get the heck out of there.

Everybody gets an A nowadays also has a lot to do with it. Dumbing down curriculums too. Indoctrination of students into identity politics is the priority.

Thank the liberal teachers for that.

Hard to believe, but Illinois spends more per student than California.

Most if not all school districts are top heavy in administration. In Rockford Dist 205 there are about 4,700 employees full and part time and less than 2,000 teachers. Which means 2,700 have nothing to do with any classroom instruction. School consolidation at least on the administrative side should be a priority. There are 11 districts in Winnebago county each with supers/assistant supers/purchasing/legal council/etc and over 868 state wide. In comparison there are approx 65 unit dist’s in Florida each comprising of 40,000 students. Total school budget in Illinois from all sources mainly local taxpayers is approx $28-$30 Billion or… Read more »

One issue underlying Illinois’s abysmal performance, compared to our neighbors, is that Illinois schools have been minority-majority with hispanics representing at least 25%, if not more, of all school aged children for almost a decade. Unfortunately, it’s no secret that the minority-minority student population is mostly poor, with 54% of the state’s elementary school students classified as ‘low income’. They also have other educational issues with 14% of the state’s students having an IEP. A student population comprising of low income minority students with IEPs is going to perform poorly under any metric. And they do perform abysmally, with less… Read more »

Debtsor – your explication will end up 5 years from now with a statement that “you were mire right than you could have predicted”. Demographics matter.

There is a collateral question amidst this data, and amidst debtsor’s excellent comment. What would the population of Chicago be today without illegal immigration? My guess (just a guess) is that it would around 800,000 people less. I worked in a union in Chicago in the summers in the late 70’s, in one of those businesses that used to proliferate in Chicago but no longer exist (the business, owned by Pritzker, moved to non-union Memphis). With the loss of the industrial base, citizens left over the years, replaced by immigrants, a portion of which are not documented. This post is… Read more »

“These are problems that have been in the making for decades, and there is no easy way out, unfortunately.”

Well, based on the article, it would appear that more money isn’t the answer, yet that is the liberal solution….as it always is, unfortunately.

Excellent piece – Wirepoints does it again!

This article is a good example of why I contend Illinois is simply immoral, or if you prefer, evil. Here we clearly see the state completely fail yet again. This isn’t an accident. It’s by design. Illinois steals from children. If you reside in this state, you are forced against your will to support this policy. After all, you are forced to pay your taxes. Still, let’s be brutally honest. The taxpayers are not totally exonerated. Until enough say, “No more. I will leave rather than let my dollars be complicit in this immorality”, there isn’t much reason to expect… Read more »

Bingo. Thats why everyone who chooses to live in Illinois needs to be ridiculed, berated and suffer.
Nobody is forced to remain in Illinois.

I don’t know Evan. It was easier for me to leave than most, and it was a tough decision. I think I’ll simply applaud those that do leave and hope others follow.

Illinois isn’t Syria, or Flint, MI. My home has retained its value, and there are no cannabis dispensaries or abortion clinics in my town. My taxes are relatively lower than surrounding communities and because of hyper local funding of schools, my neighborhood’s schools are excellent. Leaving today would just merely be replicating my lifestyle in a slightly lower tax environment. The tax savings for my family doesn’t yet justify moving. But if I ever became disabled, or had to retire early, or the economy did collapse so much that there was little work available for professionals, I would leave on… Read more »

Its only tough to the stubborn and those who don’t know better. Hence why pressure needs to be applied.
When you get to the Illinois state line you will notice the lack of a concrete wall or armed national guard forcing you to remain in that corrupt deplorable state.