If only Illinois had extended the temporary income tax increase we’d be in good shape. It pretty much took care of the state’s backlog of unpaid bills, but we let it expire so the backlog is up to almost $13 billion.

That’s a common narrative repeated time after time in similar forms by many Illinois politicians and journalists.

It’s wrong. It piles one myth on top of another.

First, the bill backlog really didn’t improve much with the temporary tax increase and had already resumed its climb when the increase ended.

The second myth is that the size of the pile of bills reflects how well the state is doing. People seem to assume, or say outright, that unpaid bills are a proxy for the state’s financial condition. They’re not. Sure, the backlog is part of our problem, but taken by itself it means almost nothing.

Let’s look at some numbers. On the right is a chart of the bill backlog while the temporary tax increase was in effect, January 1, 2011 through December 30, 2014. During that period the backlog increased for a while and ended up dropping not much — from $7.9 billion to $6.6 billion.

As you can see, the backlog was also increasing again before the higher taxes expired. The tax increase obviously didn’t eliminate the backlog, which was the primary case made to the public for the tax increase.

But looking at the backlog alone doesn’t make sense anyway.  Think of the unpaid bills as the state’s payables account and remember that the state has hundreds of other accounts. Any one account can worsen or improve while the others go in a different direction along with the net of all of them together. 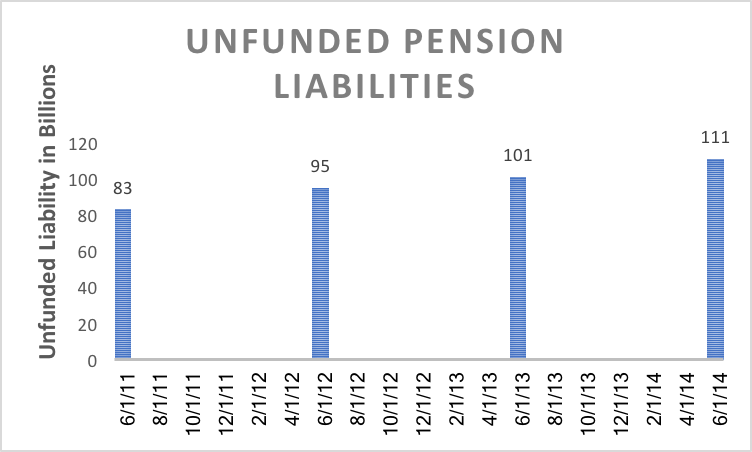 For Illinois that’s especially true because losses just get stuffed into other forms of debt, particularly pension debt because we underfund them badly year in and year out. On the left is the total unfunded liability of the state’s pensions during the temporary tax increase. Up, up, up.

Or maybe you’d prefer to look at the state’s financial statements which aggregate and offset all its accounts to come up with the state’s Net Position. You really shouldn’t trust government accounting, but if you did that you’d find that Net Position worsened from -$42 billion to -$121 billion from June 30, 2011 to June 30, 2014.

Supposedly, the length of time those back bills were outstanding shortened during the temporary tax increase, though I can’t find data supporting that. If that were true in some meaningful way, you’d expect the state would have saved money on late fees, but that wasn’t the case. As you can see in five columns in the the chart on the right, late fees spiked way up from 2011 to 2013 and still ended up higher at the end of the tax period than at the beginning.

So where did the temporary tax money go, which totaled over $20 billion during its four years? Former Comptroller Judy Topinka said in 2012 that it wasn’t going towards the bill backlog. “Not a lick. Nothing. And it was sold on the basis that it was going to pay off our debt. It all went into either Medicaid or pensions,” she said.

That’s not really true, either, since money is fungible — most of it goes into one pot and you can’t really say where it went.

But what’s clear is the temporary tax money didn’t solve much. The bill backlog continued, the pension crisis worsened and the state’s overall position kept deteriorating.

Remember that next time you hear a politician or journalist singing the praises of the temporary tax increase.

So looks like Mr. Lundy has declined to express his disagreements with this article on this page. Too bad.

Typical. Spew out falsehoods then run away.

Interesting how the bill backlog spikes every December. Is that odd considering the fiscal year ends June 30?

Funny how the backlog hit its lowest level 4 months prior to election time, as if Quinn finally remembered what the tax hike was for 6 months before it was set to expire.