Nearly 7.5 million people moved from one state to another in 2018, boosting the economies of some states while straining the finances of others.

The winners of the battle for people and their incomes included states like South Carolina, Arizona, Texas and Florida. Those findings are based on a Wirepoints’ analysis of the latest 2018 domestic migration data provided by the Internal Revenue Service.

The stakes are large. A growing population for the winners means an increasing tax base, economic growth and investment. And as baby boomers age and pressure to fund pensions increases, a growing workforce is a windfall.

On the other end of the competition are states that have become perennial losers. Connecticut, New Jersey, Illinois and New York have experienced some of the nation’s biggest drain of people and their money. 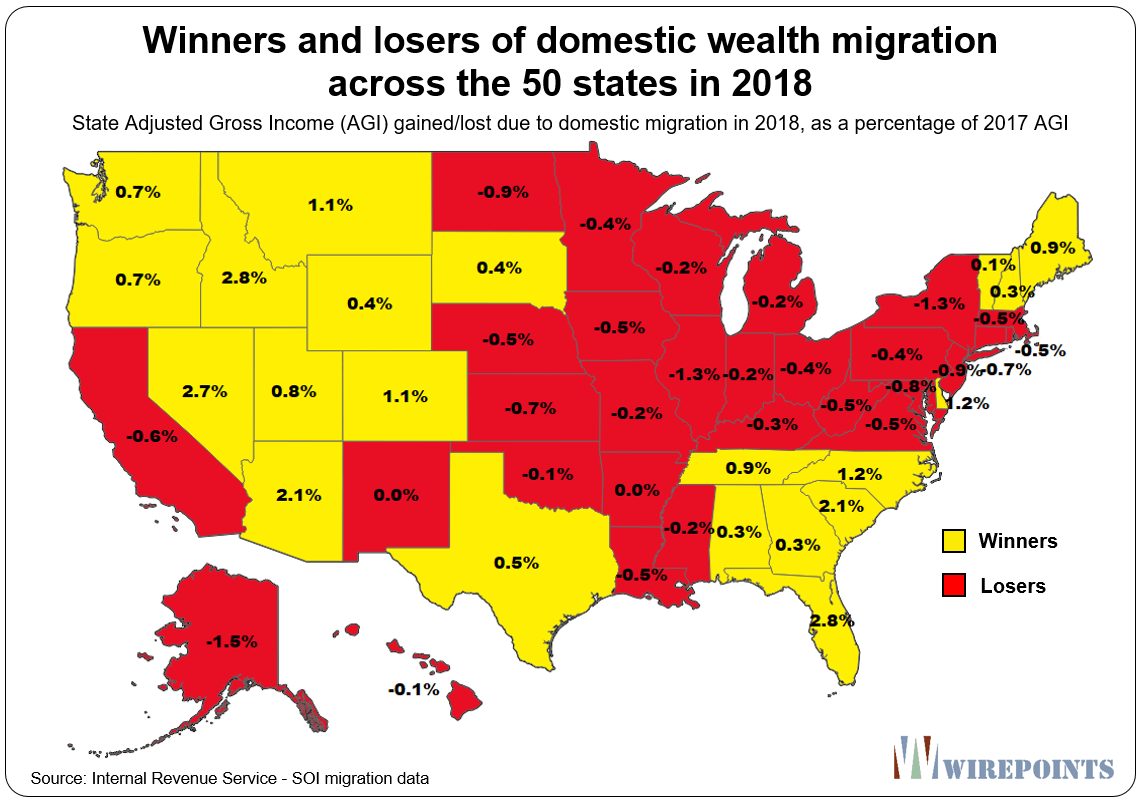 According to the latest numbers, Florida is once again the biggest winner of both people and money.

The Sunshine State attracted nearly $32 billion in Adjusted Gross Income (AGI) from people moving into the state in 2018. In contrast, it lost about $15.7 billion in AGI from those who left Florida, leaving the state with a net gain of nearly $16 billion in new taxable income.

Arizona was the runner up with a net gain of $3.5 billion, followed by Texas with $3.4 billion. North and South Carolina rounded out the top five with gains of $3 billion and $2.5 billion, respectively. 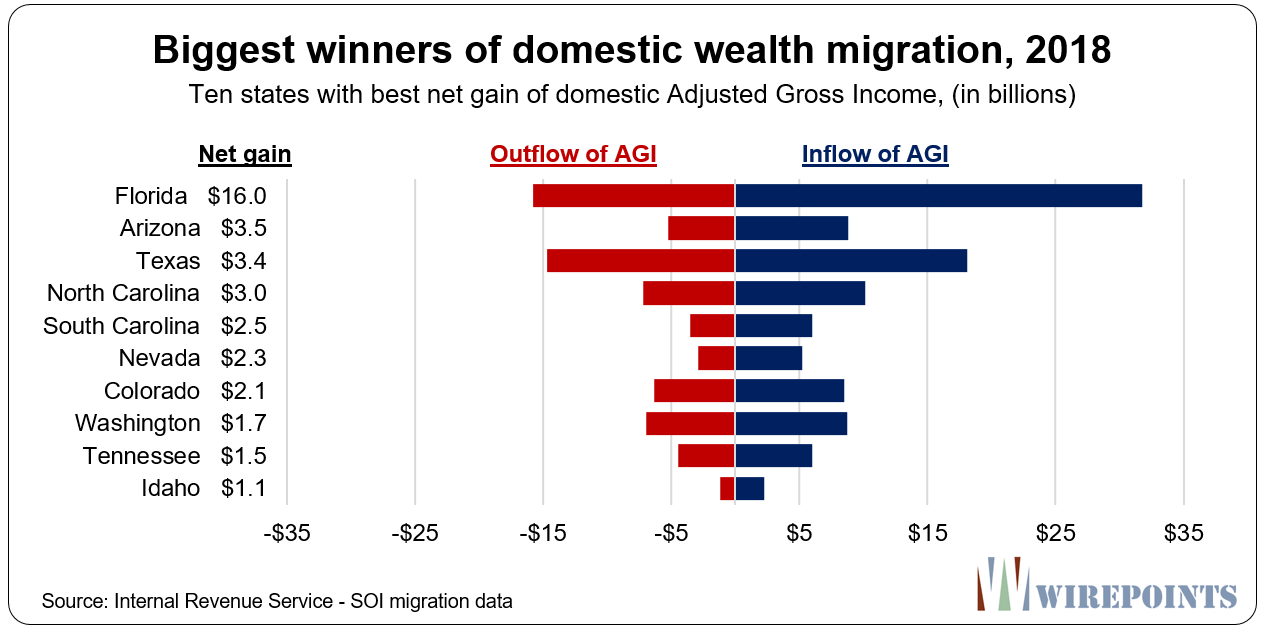 On the losing side, New York suffered the worst outflow of money of any state in 2018. The Empire State lost a net $9.6 billion in income, or more than 1.3 percent of its AGI base.

California was next, losing a net $8 billion, followed by Illinois and a loss of $5.6 billion. New Jersey and Maryland were in 4th and 5th place, with $3.2 and $1.7 billion in losses, respectively. 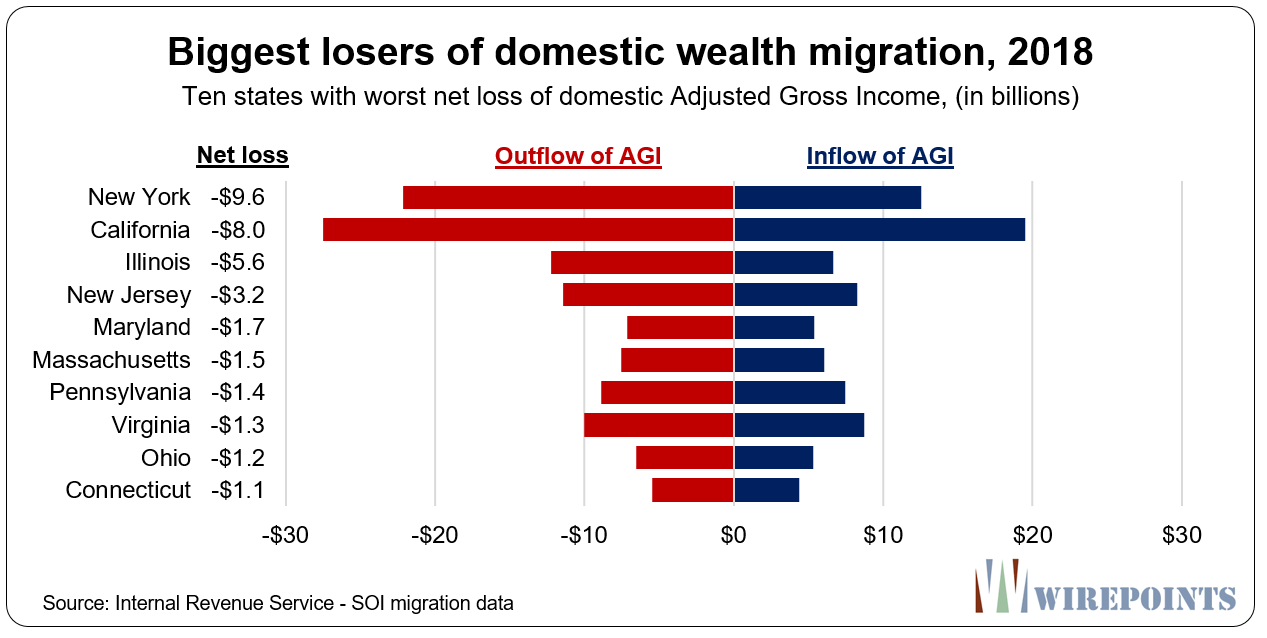 A full table with each state’s ranking is provided in the appendix below.

Keep an eye on Illinois

Illinois’ experience with out-migration shows just how damaging being an “exit” state can be. The state’s $5.6 billion AGI loss in 2018 wasn’t just a one-time thing. Wirepoints’ analysis found Illinois has netted annual AGI losses every single year since at least 2000.

The losses have piled on top of each other, year after year, and if you add them all up, Illinois’ AGI losses total $410 billion over the 2000-2018 period. That shrinking tax base has contributed to the state’s deepening fiscal woes. Illinois now has more than $6 billion in unpaid bills, the nation’s largest pension shortfall and is rated just one notch above junk.

Considering the annual losses to Illinois’ tax base, Gov. J.B. Pritzker’s wish to replace the state’s constitutionally protected flat tax with a progressive tax structure that will increase total taxes by over $3 billion is all the more striking. Illinoisans will vote for or against the progressive tax on a ballot initiative in November 2020.

The state has lost a net of more than 1.5 million people to out-migration since 2000, or more than 11 percent of the state’s population.

Florida’s gains and Illinois’ losses are a clear reminder that states are constantly competing for people, businesses and a growing tax base.

The prize for winning is big, but the price for losing may be even bigger. 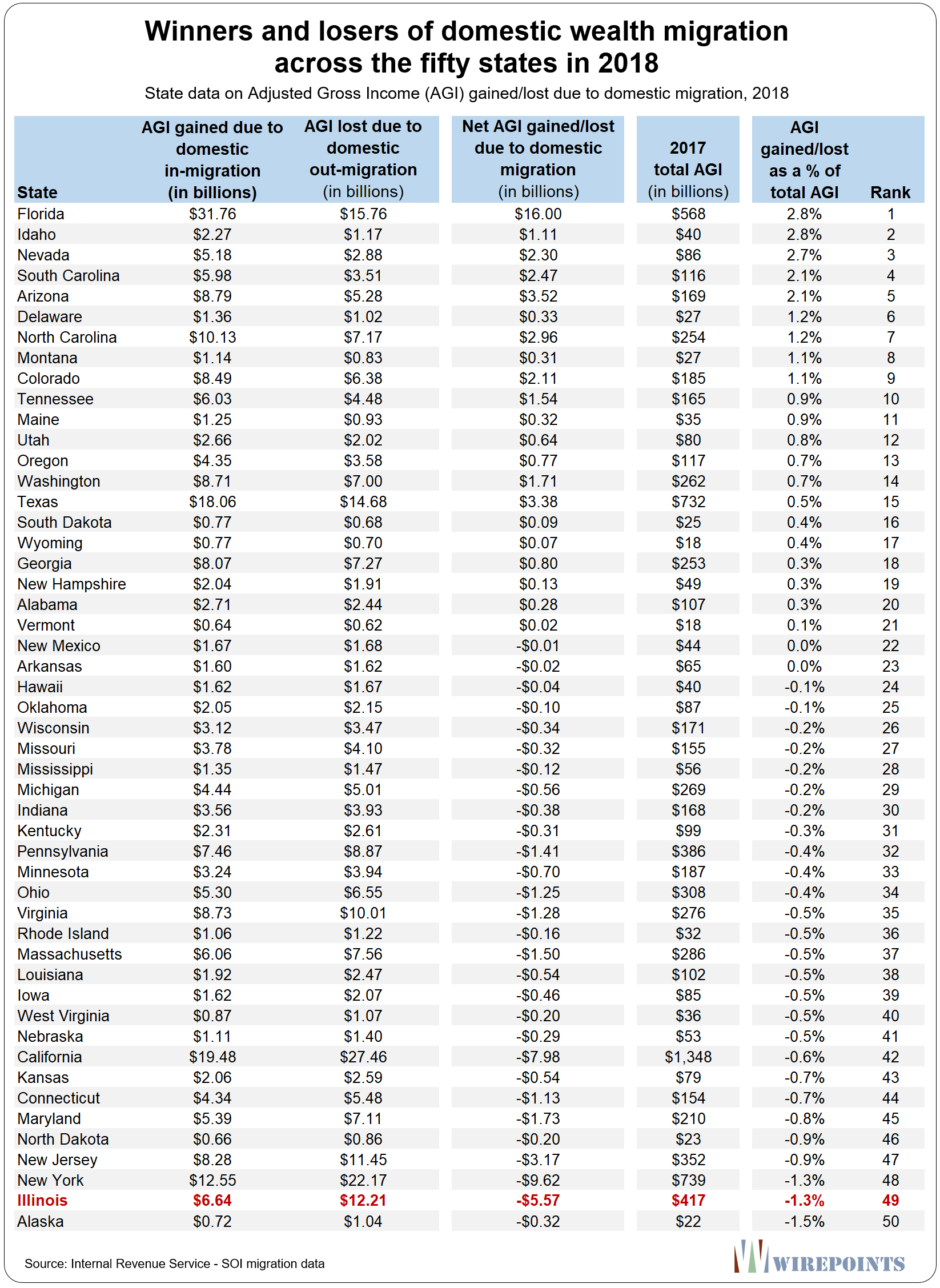 Illinois is a goner and you should be too. Leave as fast as you can.

Only the Mentally Challenged will stay in Illinois.
Anyone that can think will MOVE out ASAP.
Illinois has been destroyed by the Greed of Cops, Teachers and Firemen.
DOA, no hope just much HIGHER TAXES every year for as far as you can see.
Most of the Huge Pension money goes to Florida to live the good life.

Wow – lots of justifying high tax states and whistling past the graveyard in these comments. For me, I’m just glad I left the Midwest and then the East Coast over a decade ago for the PNW which is thriving and where people actually want to move.

We’re glad you left, too. FWIW, Seattle and Portland used to be nice places…before people like you showed up.

Funny how I commented on people’s comments/ideas and you commented on me as a person even though you have no idea who I am. You must be a leftist. But, tit for tat – you are clearly too ignorant to recognize that the PNW is a huge place and covers several states, including Idaho, Montana and Alaska. You may not know this either, but OR and WA aren’t just Seattle and Portland. So, you have no idea whether I live in Seattle and/or Portland. I could live in Spokane or Sandpoint or Helena or Sitka. But, stay ignorant and in… Read more »

In some respects, Florida may be a winner, but an economy based almost entirely on 1) tourism, 2) agriculture and 3) real estate development isn’t anything to brag about. More than one third of the state’s residents are retirees, or from other countries. For the uninitiated, retirees live on fixed incomes, want lots and lots of grubermint services but don’t want to pay for them, and tend not to spend freely. They are also organized and loud. Tourists are transient, and Florida’s 60+ million annual “visitors” translate into needed infrastructure well beyond what residents (like retirees) can afford or want… Read more »

Losing talent is even worse than losing incomes. A talent drain means the state cannot hope to attract big business, and low skilled business will avoid us because of the regulations and taxes.

I’m going to make a prediction that we will see a massive new campaign to import immigrants that work for cheap to help keep businesses here and prop the state up with tax rev. Chicago will be the land of the H1B.

Doubtful. You are correct that an advantage of immigrants (especially illegal) is cheap labor. That however is nullified when you impose high minimum wages like Chicago. Businesses will automate or focus more of their operations out of state.

Are illegals getting paid in cash demanding the $15.00 an hour minimum wage? I honestly have no idea.

The state lost 5.6 Billion in tax base. Let’s assume that 100% of this decline is due to the increase in state income taxes. If the state were to only charge 3% for an income tax they would have collected an additional 168 million in taxes if these people would not have left the state. I’m pretty sure the state collected way more from the remaining people of the state by raising taxes from 3% to 4.95%. Around 3 billion more. The politicians in charge see it as they collected more overall so they don’t care. Until they start collecting… Read more »

$5.6B. That’s a lot of taxes which the state will no longer collect. And don’t forget: Illinois’ money manager has posted on Twitter for the world to see that she’s glad to be rid of those who leave.

We don’t know whether that AGI was IL taxable or not. If it is all “retirement income” (and, while unlikely, it could be), then not a dime of state income tax left IL.

theres way more to local IL taxes than just income taxes that retirees in fact do pay… property, sales, vehicle registrations, the list goes on and on

the best part about retirees is that they don’t require very much strain at all on the system, they don’t go to school, and they don’t commit crimes yet still pay quite a bit in taxes

January 24, 2021
Board members of Township District 113, made up of two high schools serving more than 3,500 students, have shown no signs of wanting to open up even as nearby districts increasingly add in-person learning options. Not surprisingly, that has many parents in the north shore suburbs of Deerfield and Highland Park more than frustrated.
View Comments (3) | Add Comment