Maine Township, which contains large parts of Park Ridge, Des Plaines and Niles, is considering a merit pay scheme for township employees. It wants to replace the antiquated system of giving automatic cost of living increases to every employee. Everything else equal, that’s not a bad idea. Compensation should be based on how much value an employee adds, not on just showing up for the job.

But a look at Maine Township economic and census data since 2009 – from household incomes to property taxes to inflation – shows that not everything is equal.

The township’s total payroll has risen by more than 25 percent since 2009, even as the residents that pay for the township continue to struggle through Illinois’ fiscal and economic mess. Given the numbers, the trustees should drop the merit based proposal and, instead, implement an overall payroll freeze. Then they should start the process of consolidation.

Here are the facts. Not only have Maine Township residents lost purchasing power since 2009, they’ve been forced to pay for a township payroll that has grown 3.5 times faster in total than their own incomes.

On top of all that, township residents pay for 95 percent of the health care premiums of township employees, even as their own premiums continue to spike yearly under the Affordable Health Care Act.

The pain for township residents doesn’t end there.

Property values in the township are down by 25 percent compared to 2009, according to the Illinois Department of Revenue. But that doesn’t mean that resident property tax bills are smaller today.

On the contrary, total property taxes paid to cover the cost of the township are up nearly 23 percent in total.

That means effective property tax rates to pay for the township government have risen by some 60 percent since 2009.

Overall, taxpayers in Illinois pay the highest property taxes in the nation. Residents in Des Plaines, Park Ridge and Niles aren’t exempt from that pain. On average, they pay effective tax rates of approximately 2 percent on the value of their homes. That’s far higher than residents in Missouri and Indiana pay. 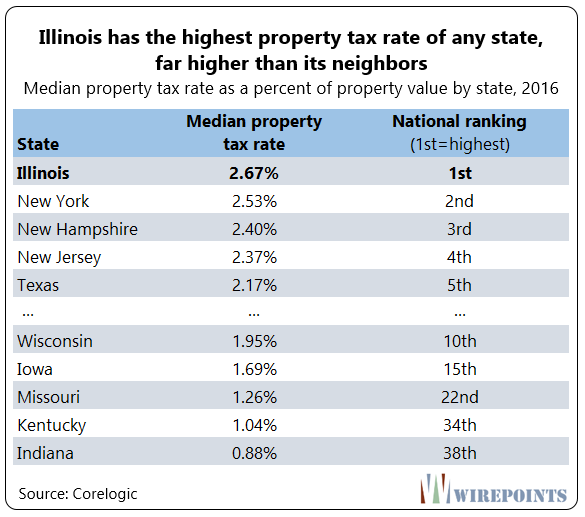 Maine Township needs to scrap talking about salary hikes. In fact, given the punishing property tax burdens across Illinois, the township should instead merge its operations with other units of local government, including the cities in the township. 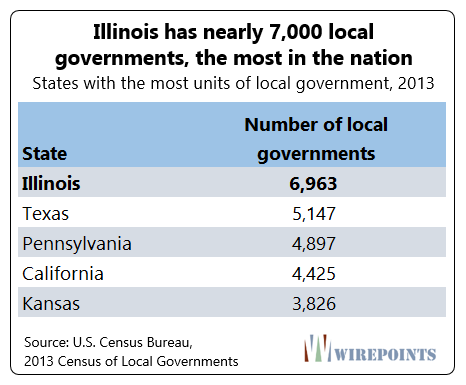 Illinois has nearly 7,000 units of local government, the most in the nation. They contribute greatly to Illinoisans paying the nation’s highest property taxes.

Only by merging some units and closing others – eliminating overlap and duplication and creating efficiencies – will the state finally offer the property tax relief Illinoisans need so much. Maine Township should consider the consolidation savings of the Evanston Township and the proposals of Lt. Gov. Evelyn Sanguinetti to pursue a consolidation.

Here are some other growth rates over the 2009-2016 period (source St. Louis Federal Reserve Economic Data): Nominal GDP, 29%. Corporate profits before tax, 58%. The 26% growth in Maine Township’s payroll does not seem terribly out of line with these. Maybe the question you should be asking is why household incomes nationally have grown only 7% in these years despite uninterupted economic recovery and strong growth in corporate profits. I don’t think that a single reputable economist could convincingly attribute this disparity to overly powerfull unions – if anything, the reverse is more likely to be true.

Cut? Ha, ha ha! They will be hiring more of there friends and family as soon as humanly possible. They will ALL get nice merrit raises going forward. We now live in FL and don’t miss that liberal experiment gone crazy, soon everyone will be a government employee.

Consolidate with what? Another township? Almost 20 thousand citizens live in the township, but not in any of the cities or villages. Where do they belong?

The county and the three main cities can provide the services. For sure, the details matter because each township is different, i.,e., some have large unincorporated areas.

But FYI, Illinois has over 1,400 townships. In contrast, a majority of states in the US have only have two layers of government – munis and counties. They make it work without townships.