Illinois can’t get its pension debt to shrink even under the best of scenarios.

The Commission on Government Forecasting and Accountability announced that the state’s pension debt remained virtually unchanged from last year, despite a continuing surge in stock markets globally. 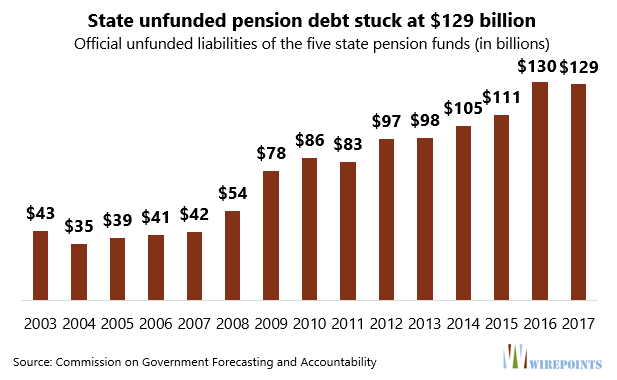 The pension shortfall failed to improve despite sizable investment returns by the state’s pension funds. The teachers’ fund earned 12.4 percent on its investments compared to a 7 percent expectation. Both the state employee and university employee funds also earned above 12 percent returns. 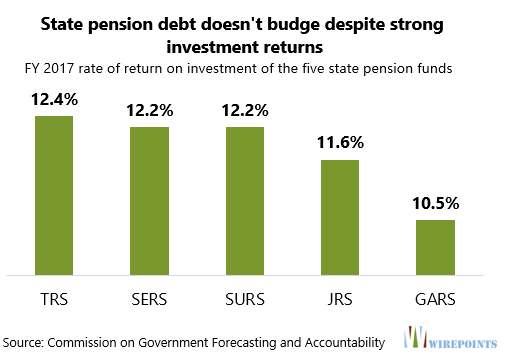 The failure to show improvement is largely driven by the fact the funds are still grossly underfunded.

Collectively, the five pension funds have just 40 percent of the funds they need today to be able to meet their obligations in the future. The university employee fund, SURS, is the best funded with just 44.1 percent of its liabilities covered.

Most notable is the funding ratio for the state legislator pension fund. It is just 15 percent funded. Any way you measure it, it’s broke. Only a yearly bailout by taxpayers is keeping it afloat. 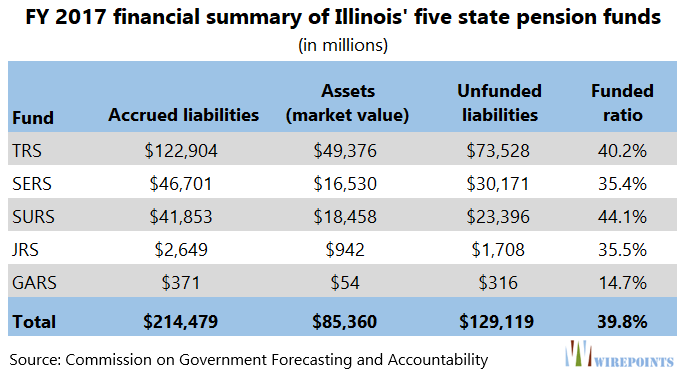 That bailout can best be seen by comparing how much the state contributes each year to a given fund versus the size of that employee group’s payroll.

As a benchmark, the yearly retirement costs of employees for an employer in the private sector is in the range of 10 to 15 percent of payroll. That covers Social Security costs of 6.2 percent plus some contribution into a 401(k).

By comparison, the state pension funds are so broke that the state contributions have ballooned when compared to what total payroll costs are.

The yearly state contribution to pensions in 2019 will be the equivalent of 43 percent of payroll. That’s an extreme number of any budget to handle. 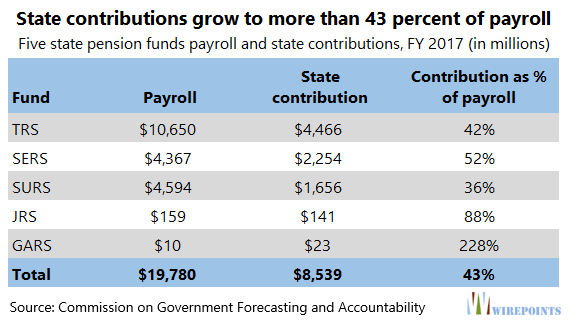 GARS is the worst off of all. Not only are taxpayers forced to pay for their legislators’ salaries and benefits – some of the highest in the nation – but they are also forced to bail out the pension mess that legislators have made.

To ensure GARS can make its payments over the next few years, the state – meaning taxpayers – is contributing 2.3 times what it already pays in legislative salaries.

What’s important to note is that the above numbers are the rosy scenario.

The state’s actuaries are still calculating the pension shortfalls assuming investment return rates of around 7 percent on average.

Add to that all pension shortfalls in municipalities plus the state’s $57 billion in unfunded health care obligations and taxpayers’ burden becomes unbearable.

Illinoisans won’t prosper again until the state finally reduces its pension shortfall. To get there, the state must adopt defined contribution plans, reforms that bring labor costs in line with what Illinoisans can afford, and bankruptcy laws that allow governments to reorganize their debts.

If you are an Illinois tax payer not getting a pension. The best advice you can get is to move. You are looking at years of higher taxes and fewer government services. So start looking for someplace to move . The next recession will ruin Illinois.

1
Bob+Out+of+here
Reply to  Steve from Lombard

A hair under 11.8% average, yet pension shortfall basically remains the same. God help IL when the next recession hits, because Madigan sure hasn’t.

Here’s my solution to the public pension crisis:
https://drive.google.com/file/d/0B90sU3A85q46OE9BZHJFSWEzbGM/view?usp=drivesdk
Thoughts?

This seems to have been created by a staff of one and not likely to gain much widespread support if one is to consider the various court rulings countermanding the simple/simplistic logic of some of what’s proposed. Or, maybe the writer simply doesn’t care about such things and prefers an autocratic political system as opposed to the three branches of government we have in this country which often put brakes on each other’s decisions much of the time.

The table FY 2017 financial summary of Illinois’ five state pension funds has an error. It states that the numbers are “in billions” but they are actually in millions.

What’s was last year’s normal cost as a percentage of payroll? Is it still in the 9% range? Also, does anyone have an actuarial model that would show what the liability or cost would be if the assumed investment ROR was 6% instead of 7%?

Great point. These stories about the pension liabilities generally fail to mention that it is past underfunding that is to blame, not the normal cost (meaning, the cost of benefits earned in the current year). Normal costs are totally within normal bounds. The problem is making up for the gross underfunding in years past, often long past. All of the proposals to change to a 401(k) ignore the fact that this will not change the liabilities that have built up. Furthermore, the newer plans under which more recent hires are earning retirement benefits are quite meager, but their real impact… Read more »