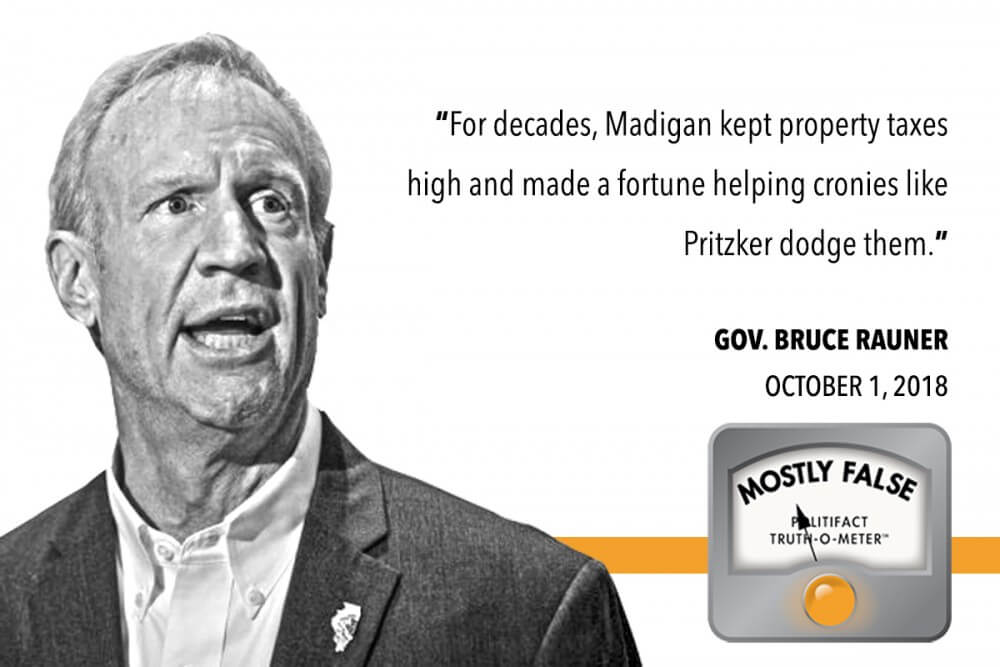 Enlightening, eh? But not a word from Sepeda-Miller about countless ways state government forces high property tax rates in ways Madigan fully supports. Unfunded mandates are what mayors and school administrators across the state say tie their hands. “We only have so much money,”  as a Quincy school superintended put it. “All unfunded mandates put stress on schools, and there are countless unfunded mandates in the state of Illinois.”

Unfunded mandates range from small things like led testing in schools, to these major ones:

•  Springfield sets all pension benefit levels, including those for the Illinois Municipal Retirement Fund, police and firefighter pensions, and those for Cook County, Chicago Public Schools and others in the Chicago area. All are paid primarily by property taxes, and pension costs comprise the lion’s share of our fiscal crisis.

•  Springfield sets “prevailing wages” local government must pay. As we documented before, those wages are rigged — anything but “prevailing.”

•  Mandatory collective bargaining rules binding on Illinois towns and cities are all imposed by the state, driving up all labor costs.

Neither Madigan nor his party is responsible for all of that, but there’s no doubt Madigan has run the House and much of state government with an iron fist for most of the last three decades. He has never indicated any interest in eliminating unfunded mandates. And the Senate is run by President John Cullerton who, like Madigan, is a partner in a firm that does property tax appeals, making them aligned on their conflict of interest on property taxes.

To further support her claim that “Madigan’s record” doesn’t show opposition to lowering property taxes, she says Madigan has supported property tax caps. Ask any homeowner in Illinois if those caps are anything but a ruse for reporters to cite.  Property owners have seen their taxes double or triple just since 2000. The caps have more holes than the hull of the Bismarck.

She does make one point that’s at least arguable. In 1997, Madigan supported a “tax swap,” which would have reduced local property taxes in exchange for higher state taxes. It died, due mostly to Republican opposition in the General Assembly.

But the tax swap issue is immensely complicated and that was long ago. She didn’t mention that Republican opposition was based in part on their view that, like so-called “caps,” the swap wouldn’t really have provided much property tax relief. The core problem today is Illinois’ combined tax burden, which is at or near the highest in the nation, for which Illinoisans are getting little in return. Swaps, even if real, mean little.

Strange “fact-checks” from the BGA have become routine. Our comments on it’s previous one are linked here.

The BGA’s recent self-appointed role as “fact-checker” is beyond dubious; it’s disingenuous.

September 22, 2020
Mark was on with with Dan Proft and Amy Jacobson discussing Wirepoints' new report on the need for comprehensive pension reform, the push for a progressive tax and the potential for a federal bailout for irresponsible states like Illinois.
View Comments (12) | Add Comment

September 22, 2020
Wirepoints’ plan immediately cuts the state’s official unfunded pension and retiree health liabilities by over $70 billion, dropping debts to $120 billion from $192 billion. That reduction saves the state an average of $5 billion a year in retirement costs and reduces retirement costs as a share of the state’s budget to 17 percent from 26 percent.
View Comments (7) | Add Comment