Illinois Gov.-elect J.B. Pritzker says one of his first legislative priorities is to focus on things that will “lift up the standard of living” for Illinoisans by “putting dollars back in their pockets.”

He’ll soon be tested on that. Pritzker is due to negotiate a new AFSCME labor contract that has gone unsigned since 2015, when the last contract expired. Whether Pritzker protects the little guy – or just continues to take care of the unions – will be evident by the deal he strikes with AFSCME.

There are six facts Pritzker can’t ignore during negotiations if he wants to give dollars back to ordinary Illinoisans. They’ve been taking a hit for years so that public sector workers could continue to benefit considerably. State workers get the nation’s second-highest pay, automatic salary increases, free retiree health insurance, Cadillac healthcare benefits at subsidized prices, and Social Security on top of overly-generous pensions.

We provide the facts below.

What’s currently at stake is a contract that could cost taxpayers at least $3 billion over its life: That’s the difference between what AFSCME’s been demanding and Gov. Bruce Rauner’s last best offer.

Rauner and AFSCME have been fighting over the terms of the contract for the last three years. The union originally demanded salary raises ranging from 11.5 to 29 percent, a 37.5-hour workweek, five weeks of vacation and enhanced health care coverage. Rauner wanted major reforms to both overtime and healthcare costs.

Now that their adversary is on his way out, the union may end up demanding – and getting – even more than it originally wanted. It all depends on Pritzker.

The data we present below comes straight from FOIA requests, state reports, and the federal government. The story is clear regardless of where the data comes from: Illinois state-worker benefits are way out of line with what ordinary Illinoisans can afford.

AFSCME salaries have grown four times faster in the last decade than the earnings of ordinary Illinoisans.

Between 2005 and 2015 (when the last AFSCME contract expired), ordinary Illinoisans’ earnings grew only 11 percent, half the rate of inflation. Meanwhile, state AFSCME salaries grew more than 40 percent over the same period. 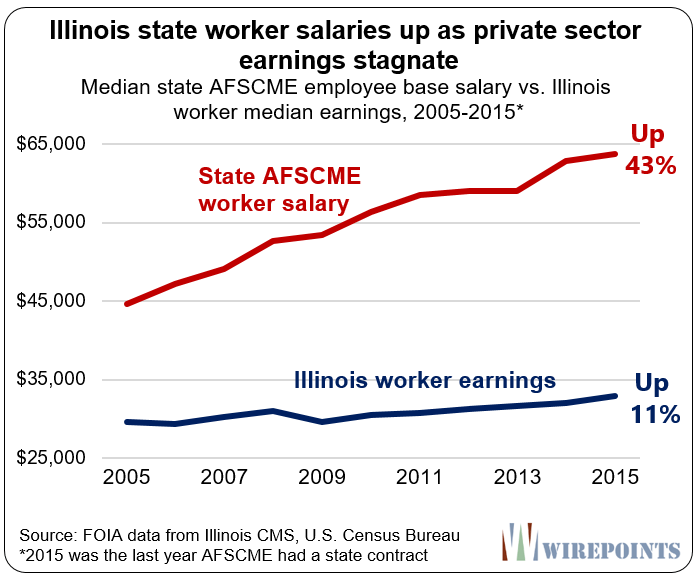 AFSCME workers get raises in good times and bad thanks to the long-term contracts they negotiate with the state. In contrast, Illinoisans have to make do with less even as they are stuck paying AFSCME workers more.

Fact 2. Illinois state workers are the 2nd-highest paid in the nation

Illinois state workers are the 2nd-highest paid in the nation after adjusting for cost-of-living. Only New Jersey pays its state workers more than Illinois does. 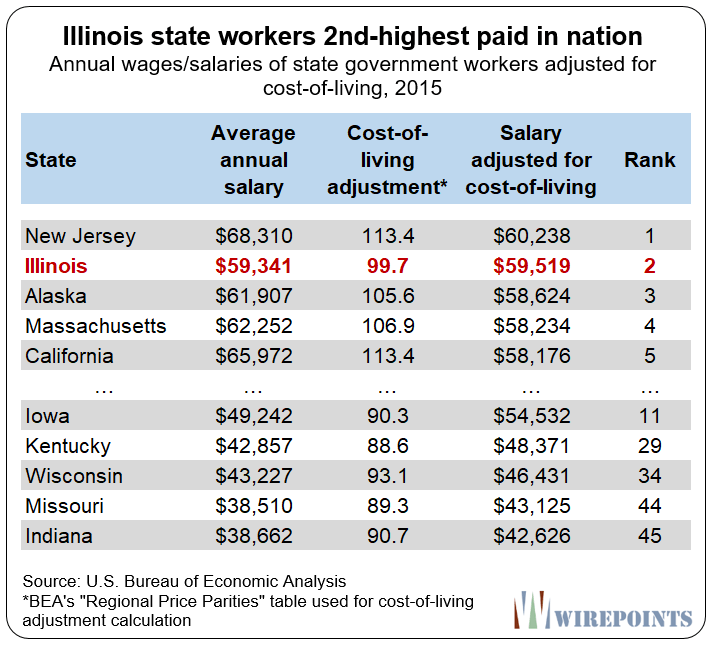 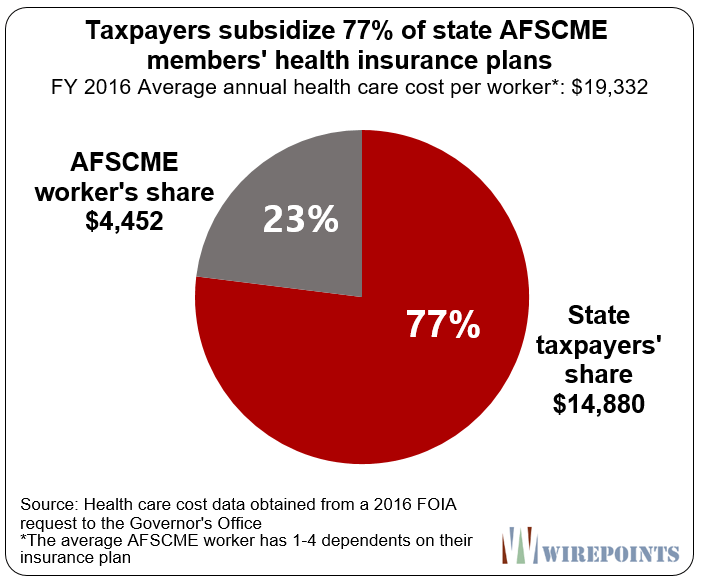 That fringe benefit for career workers is worth $200,000 to $500,000 per retiree. Nobody in the private sector gets free retiree health insurance. 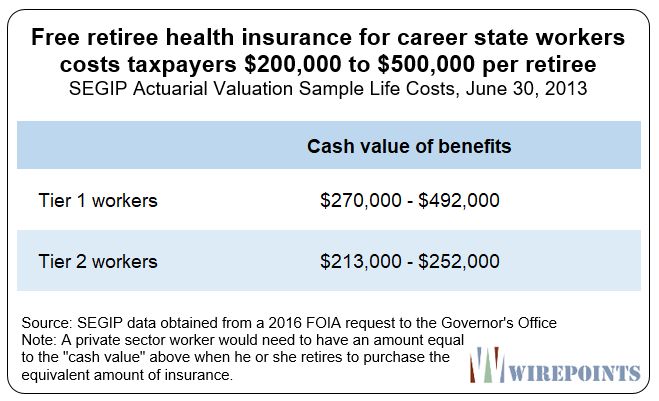 Recent retirees who spent their careers working for the state can expect to collect $1.8 million in total pension benefits during their retirement. On top of that, 96 percent of state workers are enrolled in Social Security, so they’ll get benefits from that, too.

Add up all the compensation AFSCME employees get in a year – salary, overtime, healthcare benefits, future pension and health insurance benefits – and the average state worker costs ordinary Illinoisans nearly $110,000 a year. 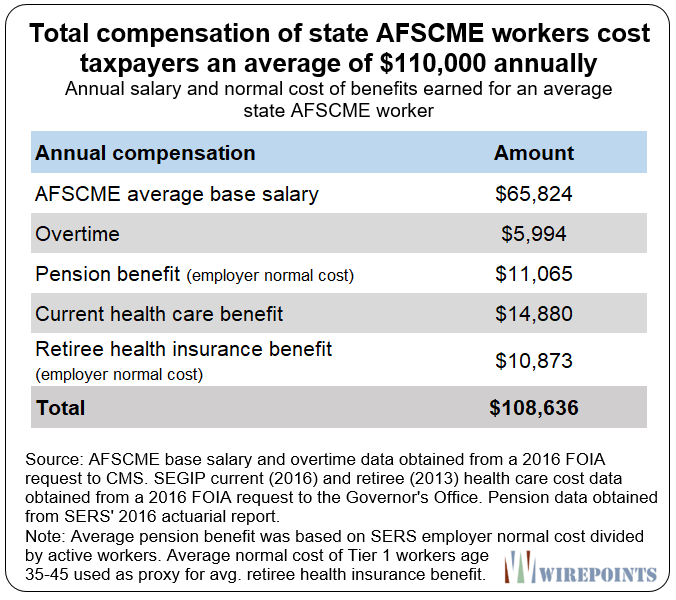 Gov.-elect Pritzker, it’s up to you: In whose pocket will you put more dollars?

This article is dishonest in some respects. The writers make it seem like the 37.5 hour work week is an extreme new demand when in fact 37.5 has been the standard for decades. Also, regarding vacations, I believe you have to have been a state employee for 25 years to qualify for 5 weeks.

Where do you live, France? Five weeks of vacation! 37.5 hours/week! Here in America, at least in the private sector, try maybe 3 weeks and 50 hours/week as the norm.

JB speaks with forked tongue on many many issues. You will soon see it manifest as he becomes governor. Good luck to each person in IL.

The statement that 96% of state workers are covered by Social Security is, at the very least, highly misleading. The link provided is to the State Employee Retirement System (SERS), whose participants are indeed generally covered by SS. However, university employees and teachers are also members of state pension systems and are not covered by SS, and these SURS and TRS participants greatly outnumber SERS participants.

The whole article is about AFSCME. Are the people you mentioned part of that union? Or are you bringing up unrelated information?

Andrew, the 96 percent statistic is for just state employees (not teachers or university employees). 58,500 of the 60,600 active state workers are covered by SS. When you include retirees in the total, it’s 83,000 of the 85,400 are covered by SS. Teachers are not state employees. Yes, the state makes their pension contributions, but they are not state workers. They do not get SS. University workers are also not employees of the state, though often they show up in state worker statistics under national comparisons. They also do not get SS. For clarity, our piece was about traditional state… Read more »

I hope the new gov gives the unions everything they want. At this point, what does it matter. The taxpayer is already at the breaking point. Does it matter whether they owe 1 billion or 100 billion when they have nothing left?

So you think these facts can’t be ignored, huh

I’m not going to bet you!

Nobody walking upright can think Porky is going to act in the taxpayers’ interest. AFSCUM donated (lent) a lot of money to Porky and now he’s going to use your money to pay them back

25 years with the State, non union, pension of $25,000. That is what ALL pensions should be. Union secretaries who rarely do any work (great at running businesses using State equipment) get double and triple of that amount. Of course Gov Fatboy will side with the unions and Illinois will have the honor of being first State to go bankrupt.

Employees. not workers. Deciding what kind of donut to have while you push a pencil is not “work.” And don’t forget the fact their contract says they can get to work up to an hour late without being docked, then they say they have to stay late to make up for it, in return for which they get overtime since OT is calculated daily, not weekly.

This will all be stage-managed. Both sides know they have an issue of public contention here, and both sides will want to protect the power structure that gives the unions what they want when there are less people looking. Watch for them to get a quick agreement wrapped up where the union feels like it’s a “fair” deal, but tones down their glee. Pritzker will declare that he “worked with what he had,” but they are both happy they could come together and work out their differences, unlike with that evil Republican leprechaun, Bruce Rauner. This all could have been… Read more »

you got it!! and the press will gobble it up.

I have to agree, with both of you.

Taxes go up, but Debt will skyrocket, so as not to alarm the current taxpayers too much and still pay off the voting block of the Democratic Political Action Committee. So let our kids pay for the corruption of today and of tomorrow, just like we have been doing for the last 35 years. Is Madigan’s clock ever going to run out?

the scary part is, maybe jb has no plans and will be happy to hand over running the state to madigan & the mob while he runs around showing up at tech incubators openings and hob-nobing with well to do dem university/ philanthropy types.

This is going to be a good one to watch. It should be a good litmus test on which way JB is going to roll; pro-union or pro-taxpayer.

Bruce, I’ll bet everything you have that he is Pro-Union.

Pro union of course. Fatboy has never held a job so he will be Madigan’s puppet.

January 28, 2021
It would have been easy – yes, easy – to build a simple system that people could understand for making appointments to get the vaccine. That wasn’t done, so the predictable mess has ensued.
View Comments (4) | Add Comment