No material reform of any public pension in the State of Illinois is currently possible due to a strict interpretation of the pension protection clause in the state’s constitution. Yet those pensions are widely regarded as unsustainable in their current form and are the primary reason Illinois was approaching what the Wall Street Journal properly called an “inevitable financial collapse” – even before the current economic downturn.

The only readily apparent options to legally overcome the state constitutional obstacle to pension reform are federal bankruptcy or an amendment to the state’s constitutional
pension protection clause. Reformers and opponents alike regard bankruptcy as a
last resort. But reform opponents, including the current administration, also categorically refuse to consider an amendment. They routinely claim that a state amendment followed by reforms would be voided under the Contract Clause of the United States Constitution, which prohibits contract impairment.

This report shows why opposition to a state constitutional amendment is groundless. Reform opponents are wrong. Court decisions and expert legal opinions say they are wrong. The United States Supreme Court long ago laid out the standards for when contracts can be impaired. Those federal standards – the only ones that would apply after a state amendment – have been routinely applied to revise a variety of contracts. The vast majority of other states have either reduced benefits, raised employee contributions, or both, each of which Illinois refuses to consider. Recent experiences in Rhode Island and Arizona illustrate why the federal Contract Clause is not an obstacle.

To allow for reform, amendment wording must conclusively override the pension protection clause and all other state law issues. Suggested language is included in this report.

Next, this report shows why Illinois must reform its pensions if it is to restore fiscal stability and return the state to competitive levels of services and taxation. It includes details on the underlying causes of Illinois’ pension crisis, comparisons to other states that show the state’s extreme circumstances, and why pensions today are overpromised: benefit growth has far exceeded Illinois’ capacity to pay.

Finally, this report presents various reform options that might be pursued after an amendment. It includes a baseline pension restructuring plan modeled on Illinois’ existing defined contribution plan run by the State University Retirement System. Our proposal has been scored by the state’s actuaries. The results are included herein.

Wirepoints’ baseline restructuring plan immediately freezes the state’s defined benefit plans. Stopping the growth in accrued pension promises and paying them off over time is the only way Illinois can guarantee an end to its public retirement crisis and assure retirees of what they will get.

Wirepoints’ proposal also includes changes to the state’s retiree health insurance benefits, an often ignored aspect of Illinois’ public retirement system. Going forward, state retirees would be required to pay for half of their health insurance costs – the national average for public workers – on a means-tested basis. In addition, various other reform measures separate from Wirepoints’ baseline proposal were also scored by the state’s actuary. Those results are also included.

It should be noted that this report covers proposals only for the state’s pension and retiree health systems. However, most of the state’s 665 locally sponsored pensions also require changes. Local funds’ circumstances vary substantially, and may require different reform options than those presented here.

Illinoisans should not wait until Illinois becomes a failed state before finally demanding change. It is vital to reform the state now, while it still has assets and dynamism left, rather than delay until Illinois is a shadow of its former self.

Read the rest of Solving Illinois’ Pension Problem: Why It’s Legal, Why It’s Necessary, and What It Looks Like 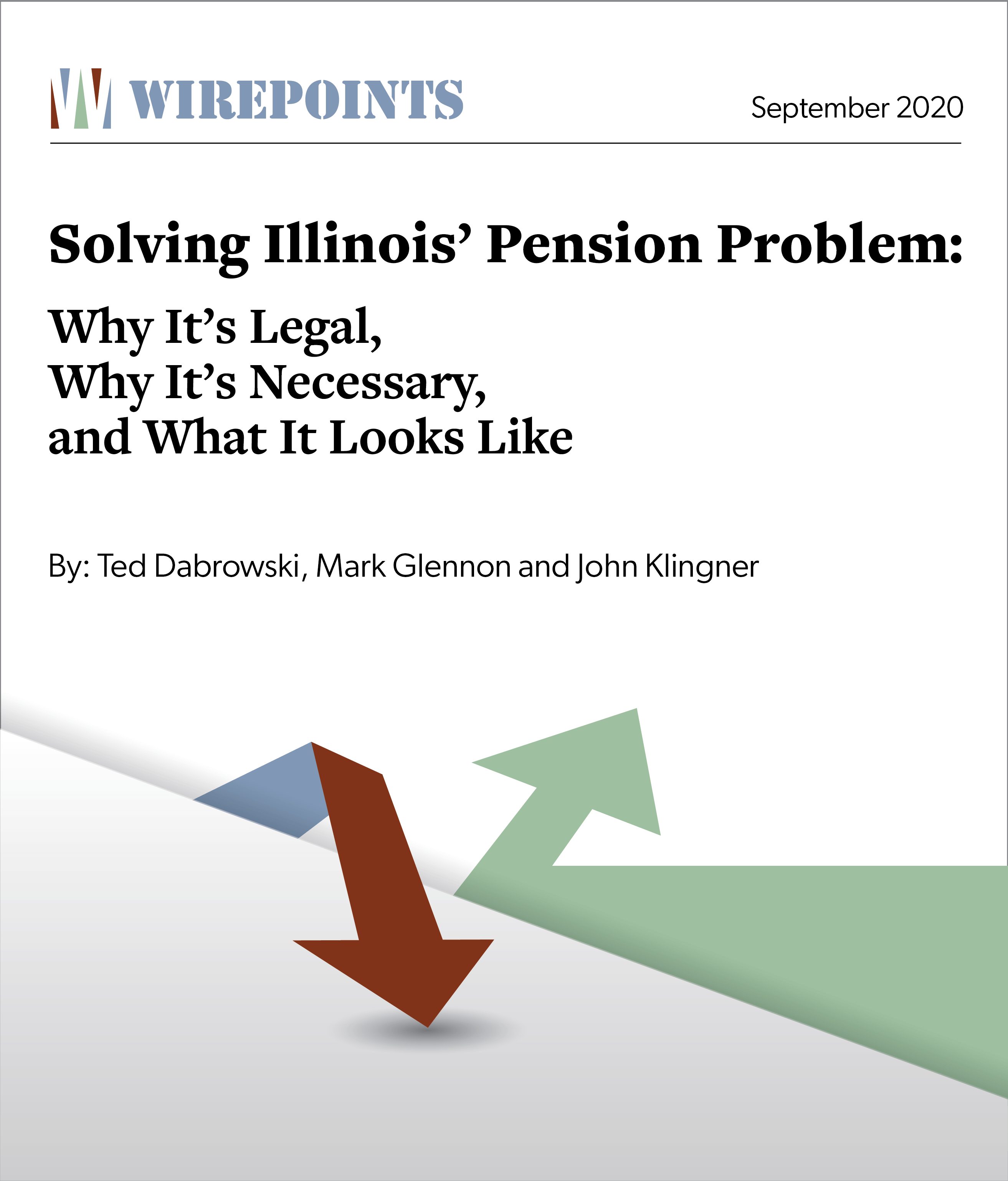 Only hope is to take it to Federal Court and get it DE cleared a Illegal Ponzi Scheme.
It really is a Ponzi scheme, fits the definition of it to the T.

The same can be said for Social Security, but when government does it apparently it’s okay.

All we need to do is start printing our own currency. Call it “Squeezy Dollars”. We’ll will subsequently create our own self-sustaining pension economy, just like the gang in “It’s Always Sunny…” illustrated:

Have been talking about this for many years. Not going to happen in your lifetime. It should happen, but the greed of the cops, teachers and firemen will not allow it to happen. They will bankrupt the state before the give in. Much easier to go to Florida and go live with all the rich pension money from Illinois. Over 1,000 people a day moving in. Low Taxes, great weather and fiscally responsible state. Illinois is toast, a goner, DOA, Pension greed has destroyed it for the poor honest hard working taxpayer and his family. Government does not work for… Read more »

You were giving more thoughtful responses after the prompt you were given on that matter maybe five days ago. But, ye old brain apparently has only so much band width for creativity if your response here is any clue. In short, you are transitioning back to your almost auto-mode style of responding. We’ve seen that droning drum beat way too long and know it well enough to be bored by it. Please shift gears and get your brain cells moving again!

“Please shift gears and get your brain cells moving again!”
Tell that to the Illinois voters.

Don’t lump police and fire into the greed of teachers. They contribute 9-1/8% of their salary into the pension funds. Teachers are nowhere near that amount! Based on this article people do not contribute that much into their 401K plans. They want what they have been promised. They are not pensioned of on final salary but a 4 year average.

0
Fed up neighbor
Reply to  Jim

Jim, exactly my daughter and son-in-law are firefighters and that is a accurate number last time we spoke about pensions

$100,000 per year pensions with 3% increases every year. Total could be well over $6,000,000 just like a poor honest hard working taxpayer gets at age 67.
It is a bunch of BS that they should get 10 times or more than the people paying them. Illinois does not tax pension money, another bonus they get.

So, what do you want here—a Soviet style centralized economy where ever job category’s worth is decided by the ruling party? If so, we can presumably reduce any given ball player’s annual salary maximum to my idea as to their value to society—maybe $20,000 a year. Who should decide what someone else’s job is worth—you? That’s what a free society gives its citizens in the way of contract negotiations, my friend. Change the negotiators and/or their incentives for how they negotiate and you’ll start to get nearer what you want.

I want FAIR treatment of the honest hard working taxpayers.

In a democratic society “fair” is a nebulous idea. It’s in the eye of the beholder. What’s fair to one isn’t fair to another.