Pity Governor Rauner’s new staffers who will have to advise Rauner what to do with the new school funding bill that’s been dumped on them.

I’ve spent the better part of the last five days trying to get a handle on the bill, or even finding credible, secondary sources on what the bill would do. For the most part, that’s impossible.

SB-1, the Evidence-Based Funding for Student Success Act, passed both houses of the Illinois General Assembly. Governor Rauner indicated that, when it’s sent to him for signature, he will execute an amendatory veto to eliminate parts that favor Chicago.

The press is all over the place on what’s in the bill. That starts with big items like how large the bailout is for Chicago. That’s the key objection to the bill. That basic number ranges from as low as $215 million to almost $500 million. Even Rich Miller, who is generally friendly towards this kind of thing, scratched his head in an article yesterday and collected some of the discrepancies in the numbers claimed.

Get further into the details and you’ll find one after another that’s being misreported or is unknowable. For example, the Sun-Times said yesterday that the $220 million going to Chicago schools covers healthcare costs. The CTBA says otherwise. It’s pretty clear the CTBA is right on that one, but on countless other items I’ve found the answer is impossible to get. Rauner hasn’t delivered convincing numbers, either.

What’s for sure is that it’s obtuse and hopelessly opaque. It’s a nightmare of complexity and a triumph of central planning. Key authors who are among those who know what’s in it cannot be trusted. 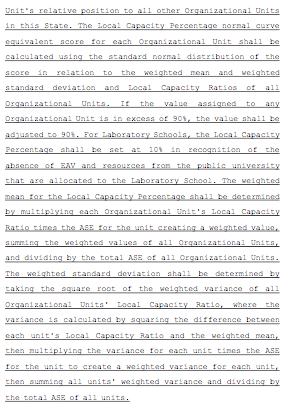 The bill is full of language like you see on the right. So much for simplifying the school funding formula, which was one of the supposed goals of the bill.

Look at the spreadsheet linked here laying out how the formulas in the bill work, prepared by ISBE, the Illinois State Board of Education. I understand they have an excellent, dedicated staff and they’ve certainly made a heroic effort putting the bill into spreadsheet form.

But you can spend hours on that spreadsheet and come away with more questions than answers.

One lawmaker who has taken the time to dig into the spreadsheet is Rep. Jeanne Ives (R-Wheaton). When I called her she pointed out two places where the reimbursement to Chicago for its teachers’ pension normal cost appears, and its’ her conclusion that it’s double-counted in the formula. Is that an error in the spreadsheet, an error in the statute, deliberate, or a misreading by Ives? Heck if I can tell.

These things, however, I can say with confidence:

•  Schools will have to master and comply with the bill’s Springfield-imposed rules to maximize the money they get from the state. So much for local control of your schools. “Follow the state’s rules on spending. Or else.” That’s how the Sangamon Sun put it in an article today. From all I have seen, I believe that article is accurate.

•  The formulas for Tiers One through Four are rigged in Chicago’s favor. The bill assumes an increase in state funding for schools of hundreds of millions each year. If, as is likely, the additional funding doesn’t materialize, complex formulas cut back schools based on which of four tiers they are in. Chicago goes to the head of the line.

•  The bill doubles down on an already incomprehensible school formula. The old formula is left in place to provide a floor below which no school can be cut. All the additional complexity fits on top of that.

•  Chicago schools already spend far more than the state average. You constantly hear otherwise because bailout supporters look only at state funding sources, ignoring federal and local money. Respecting local money, Chicago has many poor students but its property tax base is far richer than many other school districts.

According to ISBE’s most recent report card for Chicago schools, Chicago spends $15,378 per year on students and Illinois averages $12,821. The difference, we are often told, is that Chicago is the only school district forced to pay for its own pension as well as its share of TRS, the state teachers’ pension.

“To remedy this, SB1 puts CPS on equal ground by making the state responsible for its normal cost pension payments,” says the CTBA, one of SB1’s supporters.

But the normal cost of the Chicago teachers’ pension is only $215 million. You could throw in pensioner healthcare cost, too, which is another $65 million. The total is only $714 per Chicago student. Take that out and you still have Chicago schools outspending the Illinois average by $1,843 per year — 9.7% higher than the state average.

•  The entire premise of the bill — “evidence based funding” — is highly suspect. I haven’t reviewed this debate and have no opinion, but I do know you can easily find harsh criticism and research saying the whole think is bunk and has been a failure elswhere. For starters, Google the work of Stanford’s Eric Hanushek. “Pity the states” that adopt it as policy, he wrote.

• Results don’t matter. Just shovel the money. I can find no real consequence or penalty for reducing spending on items that don’t work. Evidence based funding isn’t about evidence on results, which aren’t in the formulas.

• A key architect of the bill is Ralph Martire, and that should terrify you. When Rep. Ives had questions about difficult parts of the bill she was referred to Martire because of his involvement in the formulas and drafting. He’s a serial distortion artist, as we’ve documented before. Most recently, you may have seen him on WTTW arguing that Illinois doesn’t actually have an emigration problem. He runs the Center for Tax and Budget Accountability. The CTBA is a union-funded and run propaganda shop. The others who I’m confident fully understand the bill are those who control most legislation — Chicago’s Michael Madigan and John Cullerton.

Shame on everybody who has let SB1 get as far along as it has with such little understanding. That goes for ISBE and most Republicans and Democrats alike. Governor Rauner, too, deserves personal blame.

Still can’t believe GOP reps like Steve Andersson would betray his district and vote BLINDLY with the likes of the corrupt Chicago Machine headed by Madigan. Does Madigan have ties to organize crime?

for me, the biggest issue no pol wants to talk about is–if ,as some suggest, SB1 as is 100% bailout of CPS teacher pension, for all past and future debit, then would this be a first for the State of Ill? By SB1 taking over CPS pension would that negate Daleys 1995 deal to take over CPS from state and pay pensions with capped prop tax? the result would be to open the flood gates to all the other 7000 units of gov with vastly underwater pensions to go to Madigan for a bailout. Negotiated contracts ,as flimsy as they… Read more »

Thank you-Mark
from looking at the spread sheet the first thing that astounds you are the # of school district and how few students they have,on BASIC CALC sheet? the incomprehensible Byzantine empire of Madigan and CO

The IEA has an overview of the bill (keep in mind they are a teacher union).

One avenue for obtaining answers to questions about the bill is to send the questions to your State Rep and Senator.

It’s their job to understand the bills they vote on.

Thus, they should be able to obtain answers to questions on this important bill.

If they cannot, obviously they can be called out.

Another avenue is to contact the Illinois State Board of Education.

Absolutely not that one avenue is to question your state rep or senator. I promise you that all but a very tiny percentage have even a basic understanding what’s in this This is a basic part of our crisis that the public needs to understand: The General Assembly passes bills with no fucking clue.

How about attaching today’s Forbes article by Adam Andrzejewski of Open the Books, titled, “Why Illinois Is In Trouble – 63,000 Public Employees With $100,000+ Salaries Cost Taxpayers $10B” to SB 1. And have a State Rep and State Senator read the following stats from the article along with the enrollment and school figures from the ISBE Illinois Report Card website: Those earning over $100K include: – Park Forest Elementary SD 63 Superintendent Joyce Carmine, $398,229, enrollment 1,977 in 6 schools. – Calumet City Elementary SD 155 Superintendent Troy Paraday, $384,138, enrollment 1,158 in 3 schools. – Indian Springs Elementary… Read more »

“Serial Distortion Artist.” I like that. SDA. Jumble the letters and you get DSA, or Democratic Socialists of America. The problem is that the CPS population, unlike all other districts, is not a reflection of the true wealth within its borders. Go to school districts in Winnetka, Hinsdale, Downers Grove, etc, and the student population is a reflection of the taxpayers within those towns that send their kids to those schools. Not CPS. Chicago is packed with high rise after high rise of relatively affluent young adults with no school age children, plus an abundance of wealthy neighborhoods that would… Read more »

Wall street bond traders, rating companies, the unions, are all in favor of more taxes. The bond market knows Illinois is now totally dependent upon loans to pay loans. Wall street will use that fact to their advantage by loaning us the cash at high rates. Taxpayers are the collateral for these loans, wall street will fight for ever higher taxes here, because that’s all that protects them. We are toast. There is no natural downward force on taxes here other than exodus.

July 10, 2020
Evidence shows the mental and emotional harm done to children by not being in school is outweighing the potential harm of the coronavirus. The good news is the risk of a full-time, in-class reopening is far lower than originally feared. But don't expect the teachers unions to make reopening easy.
View Comments (29) | Add Comment

July 10, 2020
Best of all, the city was able to cobble together a diverse coalition of private sector donors and philanthropists to pay for at least the first two years of the program.
View Comments (1) | Add Comment